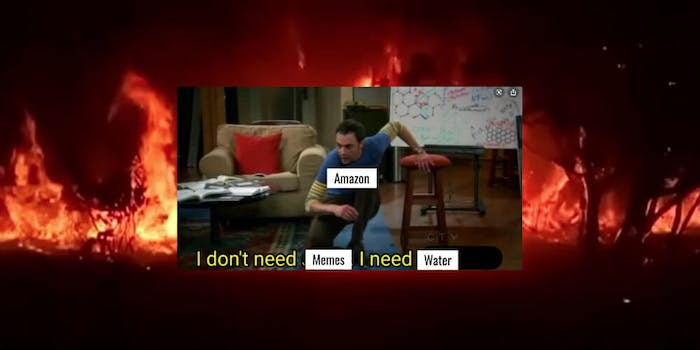 'Storming Area 51 is canceled, boys. We are storming the Amazon rainforest to put the fires out.'

Tens of thousands of fires have been ravaging the Amazon Rainforest for three weeks now–and, in an apparent effort to cope, redditors are creating memes.

The Amazon rainforest is burning at a record rate, according to the National Institute for Space Research (INPE), which has been tracking Brazil’s fires since 2013. This is bad news for the fight against climate change, as the Amazon alone produces 20% of the world’s oxygen and is said to slow down global warming.

Many are pointing the blame at far-right Brazilian President Jair Bolsonaro, who has decreased environmental protections for the Amazon and the indigenous communities who inhabit it, according to the Associated  Press. At the beginning of August, Bolsonaro fired the head of the federal agency that tracks deforestation in the Amazon, claiming that disclosing the rate at which the rainforest is being deforested is “damaging the country’s image,” according to the New York Times.

Bolsonaro also alleges that environmental non-governmental organizations (NGOs) set the fires in order to make Brazil look bad–a claim not many are buying. Several reports claim that farmers intentionally set the fires in an effort to clear land for farming and agriculture.

Now memers are using their creations in order to bring awareness to and cope with what is not only a disaster for Brazil but the rest of the world as well.

That’ll do it from memes

In one of the memes, a man in an apartment attempts to put out a fire on his neighbor’s balcony with only a small bucket of water. He is labeled “Reddit,” while the fire is labeled “The Amazon forest,” a visualization of how little awareness redditors feel they are raising through their memes.

Another redditor claims the mainstream media focused too much on video games’ relationship to gun violence in the U.S.–not a real problem–while ignoring the Amazon fires–a real problem.

AMAZON IS ON FIRE!! from memes

The fire can be seen from space(NASA) from memes

A lot of meme creators made light of the situation by subbing out the Amazon rainforest for Jeff Bezo’s online empire.

In one meme, a photo of a house on fire is captioned, “My amazon package arrived.”

Ordered from the wrong amazon from memes

Another features a person dressed in a Spider-Man costume giving a presentation.

The presentation reads, “We need to address the Amazon fire because that’s where I buy all my stuff.” It is captioned, “Jeff Bezos must be rolling in his grave,” despite the fact that Bezos is very much alive.

Jeff Bezos must be rolling in his grave from memes

*chuckles* we are in danger from memes