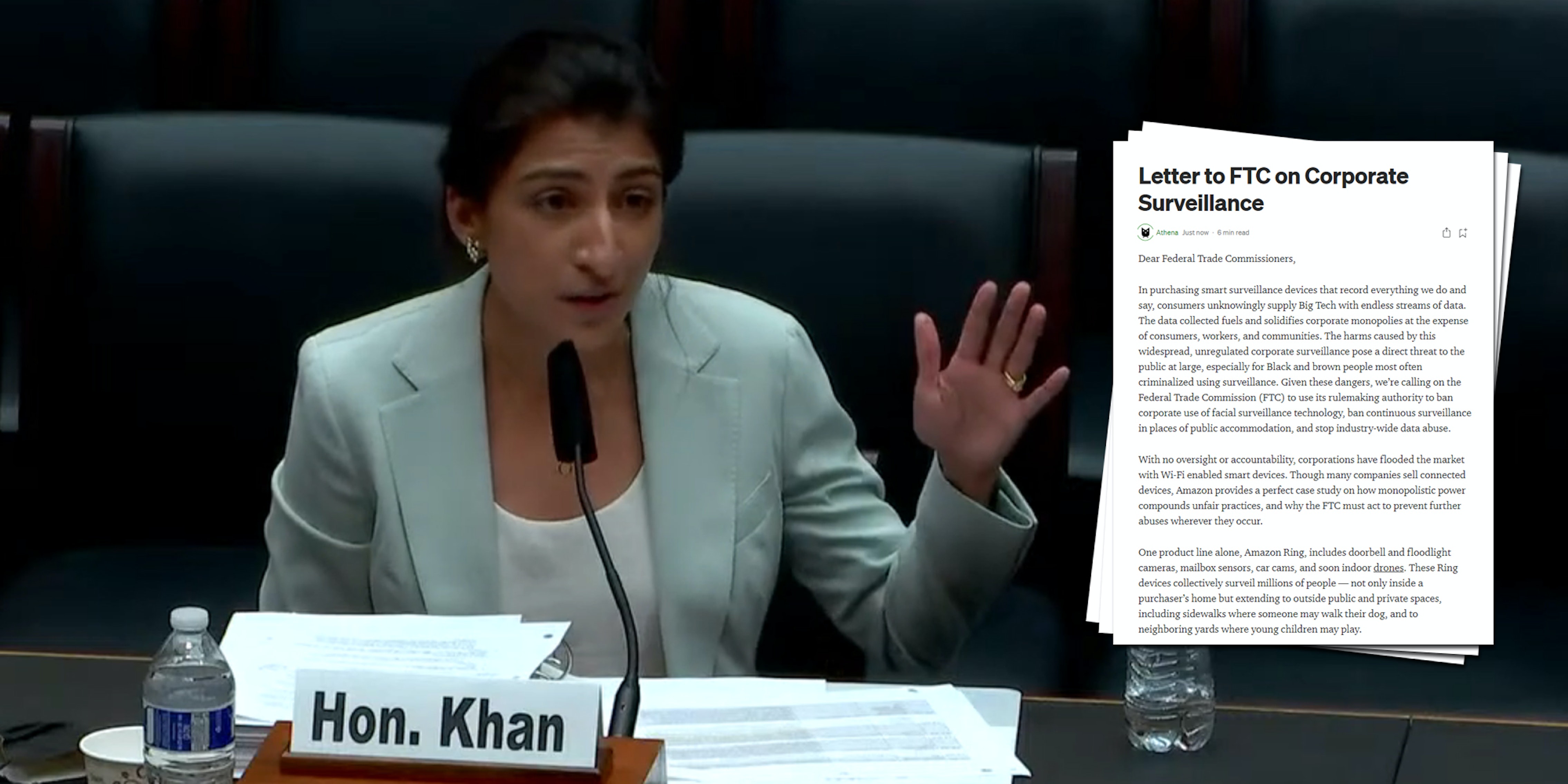 'Until the FTC acts, no one is safe.'

A coalition of nearly 50 civil rights, internet rights, and anti-surveillance groups are calling on the Federal Trade Commission (FTC) to step in and curb the “unfair and deceptive” data collection practices of big tech companies.

The group published an open letter to the FTC on Thursday calling on the agency to use its rulemaking authority to ban corporate use of facial recognition technology, surveillance in public, and “industry-wide data abuse.”

“Rulemaking is needed to stop widespread systematic surveillance, discrimination, lax security, tracking of individuals, and the sharing of data,” the letter reads, later adding: “It’s incumbent on the FTC to exercise the full extent of their rulemaking authority to ban corporate use of facial surveillance technology, ban continuous surveillance in places of public accommodation, and stop industry wide data abuse. Until the FTC acts, no one is safe.”

The letter is signed by Athena, Fight for the Future, Demand Progress Education Fund, MediaJustice, Public Citizen, the Surveillance Technology Oversight Project, and numerous other groups.

In the letter, the groups specifically point to Amazon as a “case study” on how “monopolistic power compounds unfair practices.” The letter notes that the tech giant’s Wi-Fi-enabled devices “have been shown to be deeply insecure,” and highlighting criticisms of the Neighbors app for Ring devices leading to racial profiling, and the tech giant’s partnerships with police.

“Addressing these abuses, which are widespread and generalized across the industry, fits within the FTC’s rulemaking authority, and the agency derives additional authority to protect against these abuses from the Gramm-Leach-Bliley Act, the Fair Credit Reporting Act, the Children’s Online Privacy Protection Act,” the letter reads.

The letter comes a few weeks after President Joe Biden signed a sweeping executive order that—among numerous other things—encouraged the FTC to crack down on big tech’s data practices.

The order urged FTC Chairwoman Lina Khan to use the agency’s authority in “areas such as: unfair data collection and surveillance practices that may damage competition, consumer autonomy, and consumer privacy.”

In a fact sheet about the order released by the White House, the administration noted that big tech companies were “gathering too much personal information” about people and that the companies’ business platforms “have depended on the accumulation of extraordinary amounts of sensitive personal information and related data.”

“For years now, the FTC has failed the public by abandoning their power and authority to address these dangerous surveillance and data practices. With incoming FTC Chair Lina Khan, we have a chair that cares about reigning in Big Tech. Any real effort toward this goal must address these corporation’s widespread use of surveillance and the resulting harms,” Evan Greer, the director of Fight for the Future, said in a statement. “Ultimately, if the FTC commissioners care about protecting anyone from Big Tech, creating rules to ban surveillance practices and stop data abuses must be a top priority.”

You can read all of the open letter here.