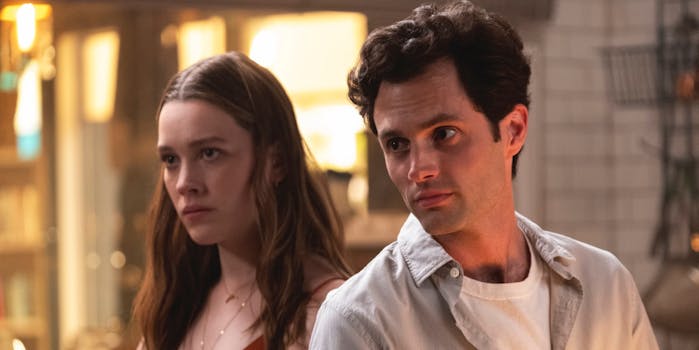 When the soapy drama You landed on Netflix last December, it became one of the streaming service’s most popular TV shows. With 40 million views in only a few weeks, many people were surprised to learn that the show, which stars Gossip Girl’s Penn Badgley, flopped on its original network, Lifetime. The show had clearly found its audience on Netflix, which picked up You for a second season. But there was one question: Would it be as bingable as the first season? I’m happy to report that the answer is a definitive yes.

RELEASE DATE: 12/26/2019
CREATORS: Greg Berlanti, Sera Gamble
STREAMING: Netflix
While trying to avoid his past in a new city, Joe Goldberg (Penn Badgley) falls into old patterns in a highly entertaining sophomore season of ‘You.’

You’s first season was set in New York City and centered around Joe Goldberg (Badgley), a book-loving sociopath who stalks a woman, Guinevere Beck (Elizabeth Lail), whom he develops an obsessive crush on. Spoiler: He ends up killing Beck and framing her therapist as the murderer. Season 2 opens on Joe changing his name and moving to Los Angeles, a place he hopes a previous ex-girlfriend who knows his secrets, Candace Stone (Ambyr Childers), won’t find him. Of course he falls in love with a new woman almost immediately upon arriving in L.A., and she’s aptly named Love (Victoria Pedretti). The show dangles her in front of the audience as a possible next victim. But You doesn’t quite want to follow in the same path as its first season.

Joe, whose voiceover we hear again throughout the season, is a complicated sociopath. He recognizes that killing people was not good, and he’s wary about entering into a new relationship. But Love, who works alongside Joe in a bougie grocery store where he’s yet again a bookseller, begins to pursue him. Mocking a certain type of Angeleno the way that You mocked a certain type of New Yorker, Love takes him on a food tour with picks by the late food critic Jonathan Gold and insists that he read Joan Didion. Much of the show takes place on the east side of Los Angeles, where New Yorkers tend to feel most comfortable (I say this as someone from L.A.) because they consider it the closest region to Brooklyn in terms of culture. The show manages, once again, to find that balance between social satire and juicy drama.

In its second season, You is also sharper and wittier. Co-creators Greg Berlanti and Sera Gamble seem to really know what made season 1 work, and they lean into those elements this season. Joe’s dry voiceovers are funny and relatable—which connect the audience with a troubled protagonist and make his actions seem almost justified. Upon arriving at the grocery store where he applies for a job, he notes, “In Los Angeles, grocery stores aren’t just a place you buy carrots, they’re a pristine, non-GMO Disneyland, and king among these is Anavrin…and yeah, obviously Anavrin is, wait for it, nirvana spelled backwards.” Watching Joe judge everything about L.A. is immensely satisfying, even if you love the city.

The new characters are another big draw of season 2, particularly Ellie (Jenna Ortega), Joe’s precocious teenage neighbor. Ellie is funny, outspoken, and ambitious—which leads Joe to want to protect her like he did with Paco in his New York apartment. Pedretti, the standout actress of Netflix’s The Haunting of Hill House, is perfect for the role of Love. Her character is not who she seems, and the truth about her past is not revealed until the end of the season. James Scully, who plays her brother, Forty, turns his trust fund character into something actually compelling. And Russian Doll’s Charlie Barnett is delightful as Love’s friend Gabe. Overall, You creates more complex characters this season. Instead of archetypes, which some of the characters in season 1 felt like, these are people you actually want to know more about.

Without spoiling too much, You does set the story up for another season. It’s likely that the show will continue on Netflix, especially if it matches or beats last year’s viewership numbers. And while there’s little mystery left to Joe and the situation he gets himself into, the show has proven that it’s a hit no matter where Joe is living.