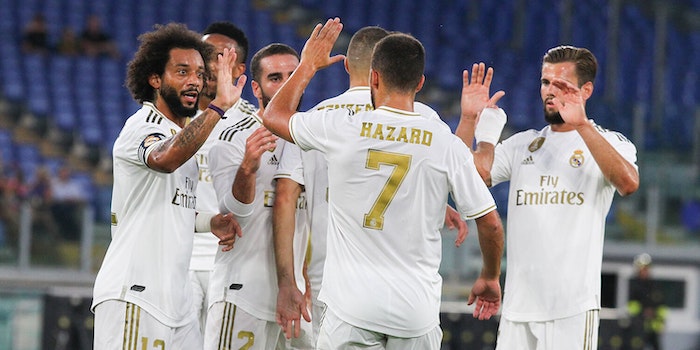 How to stream Real Madrid vs. RCD Mallorca

Real Madrid's at the top of La Liga, but can they stay there? The La Liga leaders will look to keep distance on Barca and Atleti against Mallorca on Saturday.

Real Madrid’s in first place in La Liga, but the top tier’s getting a little crowded. The team’s two biggest rivals, Barcelona and Atletico Madrid, sit just two and three points behind them in the standings. Once this Saturday’s match with the newly promoted Mallorca is over, they’ll set their sights on a Tuesday tilt in Istanbul to face Galatasaray in the Champions League. They’ll have to wait, however, for what was supposed to be next Saturday’s six-pointer against Barcelona at Camp Nou, now postponed.

Here’s everything you need to know to live stream Real Madrid vs. RCD Mallorca, including what to watch for on the pitch.

Real Madrid vs. RCD Mallorca: What to watch for

When Real Madrid last took to the pitch—in a 4-2 win over Granada before the international break—Karim Benzema scored inside of two minutes. Though Granada made it uncomfortable by closing a 3-0 margin to 3-2, James Rodriguez scored an insurance goal in stoppage time to secure the game. Eden Hazard and Luka Modric also got on the score sheet for Los Blancos.

Meanwhile, Mallorca’s finding it tough staying up in La Liga: They’re sitting in relegation-ready 18th place. The team did manage to fend off fellow cellar-dwellers Espanyol right before the international break, putting Barcelona’s other team in 19th. Mallorca—whose ownership group includes Steve Nash, Stu Holden, and Kyle Martino—may be experiencing life in Spain’s second division by next year. The talent divide between the teams clearly favors Real, though if there’s a weekend to be hosting the league leaders, this weekend, in which they’re otherwise occupied, could be a good one.