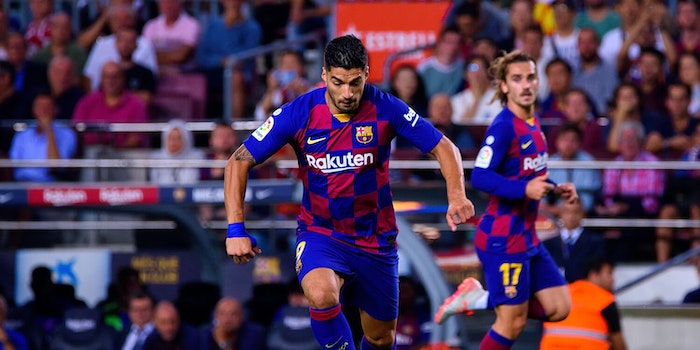 How to stream Barcelona vs. Sevilla

Here's everything you need to know to live stream Barcelona vs. Sevilla, including what to watch for on the pitch.

Barcelona vs. Sevilla is usually a Top 4 matchup in La Liga; it’s almost that this time around. Currently, Barcelona’s fourth in the standings, and Sevilla’s in sixth. Both squads have sights set on Champions League places for the coming season, though the way that Sevilla’s playing in Europa League right now–especially with newly-signed striker Chicharito–it could qualify for Champions League by winning Europa League. Meanwhile, for Barca, let’s just say it’s been a really good week to be Luis Suarez.

Here’s everything you need to know to live stream Barcelona vs. Sevilla, including what to watch for on the pitch.

FuboTV is a solid TV streaming service option, whether your tastes run to entertainment (AMC, Syfy, FX), news (MSNBC, CNN), or sports (NBA TV, NFL Network). If you’re a soccer fan, however, it will appear tailor-made for you, with 10 beIN SPORTS channels, NBC and NBCSN, FS1, FS2, UniMás, and Champions League actions via TNT all on tap. If you can’t watch the Barcelona vs. Sevilla match live, FuboTV offers a three-day replay for each match and 30 hours of cloud DVR. (Check out the complete FuboTV channels list.)

Spanish-speaking viewers have quite a few options. For bilingual families who want to watch the Barcelona vs. Sevilla game, you might consider the Español: Best of Spanish TV package for either Sling Orange or Sling Blue for 24/7 specialty channel LaLiga TV and beIN SPORTS Connect: Channels 4-9, which features matches from La Liga, Ligue 1 and Copa del Rey, among others. Both packages cost $5 per month after your free trial. Sling TV Latino is another Spanish-language package for $10 per month, including NBC Universo, History en Español, and—of import to soccer fans—four beIN SPORTS channels. (And choosing Sling TV Latino + Sling Orange for $30 per month gives you access to ESPN Deportes.) For more information, check out our guide to Sling TV channels and our Sling TV review.

Barcelona vs. Sevilla: What to watch for

Suarez scored the opening goal in last week’s La Liga matchup with Getafe, which was good enough for Barca to get the 2-0 win. Then Suarez scored a brace to help Barca come back against Inter Milan in Champions League play, after the team gave up a second-minute goal and spent the whole first half and part of the second chasing the match. There are still question marks around Luis Suarez’s health, though it looks like Ansu Fati, thought to be too injured to miss out on Spanish U-17 activation during the upcoming international break, might be returning.

Sevilla beat APOEL 1-0 on Thursday, with Chicharito scoring the lone goal of the match. Last weekend, Sevilla found goals from Nolito, Lucas Ocampos, and Franco Vazquez to outlast Real Sociedad 3-2. While a draw would be a great result for Sevilla, especially given the match will be played in front of the Camp Nou faithful, both teams will be looking for a win to assert themselves in the standings. It really does look, from these early stages of the season, that La Liga will be more wide open than last year. (That doesn’t portend well for a Barca team that ran away with it last year. But Barca may find that this still works out in its favor.)