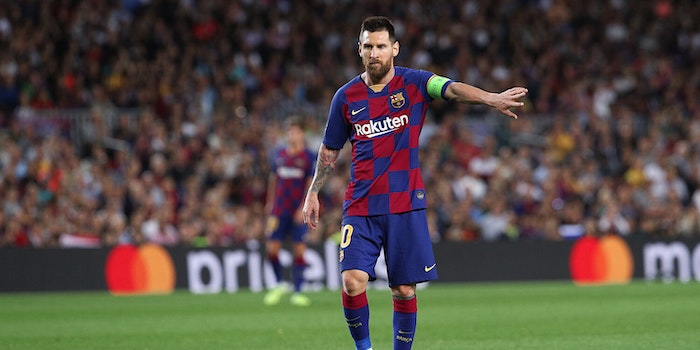 How to stream Barcelona vs. Eibar

Barcelona's back to second in La Liga. Can they vault to the top spot this weekend after a road trip to Basque Country?

In case you were wondering when La Liga would return to becoming its usual horse race between the two Madrid teams and Barcelona, it’s happening now. Barca hasn’t lost since August, and with a 4-0 thumping of Sevilla right before the international break, the defending La Liga champs find themselves in second, just two points below Real Madrid in the standings. (Unfortunately, the first El Clasico of the season between Barcelona and Real Madrid was to be next weekend, but political unrest in Catalonia has forced a postponement.)

Here’s everything you need to know to live stream Barcelona vs. Eibar, including what to watch for on the pitch.

Barcelona vs. Eibar: What to watch for

Barcelona finished its match against Sevilla two men down (including Ousmane Dembele), but still kept a clean sheet. Of course, they’d already padded a sizable lead by that point, thanks to goals from Dembele, Luis Suarez, Arturo Vidal, and Lionel Messi. That last name’s been out of the lineup for some time; Barca fans certainly welcome seeing him back, and the international break’s certainly done his various ailments good. There are reports, however, that airport worker strikes will force the team to embark on a six-hour bus trip to make their date with Eibar.

Eibar’s currently 14th in La Liga, coming off a 1-1 draw with Real Betis where they lost Gonzalo Escalante to a red card. Their best recent win of last was a 3-2 victory of Sevilla to cap off a competitive September, but even at home with a potentially road-weary Barca, they look to be facing one of their toughest tests of the still-young season.