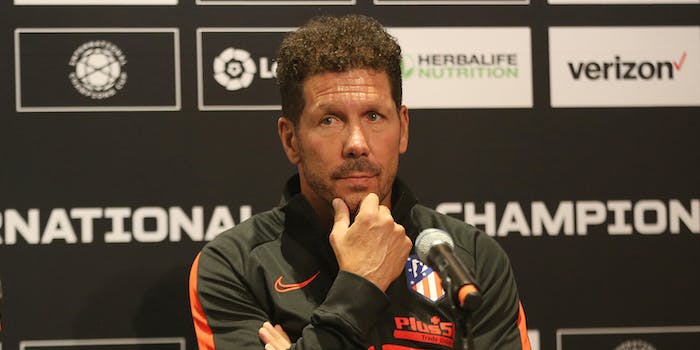 How to stream Atletico Madrid vs. Valencia

Atletico Madrid currently sits third in La Liga, while Valencia's in eighth, but they'll both leave Saturday's match with Champions League on their minds.

Atletico Madrid’s shutout streak has extended to four straight La Liga matches, but unfortunately for the current third-place team, goals haven’t been produced. Atleti will look to get on the board and keep the streak alive when it hosts Valencia for Saturday’s match.

Here’s everything you need to know to live stream Atletico Madrid vs. Valencia, including what to watch for on the pitch.

Atletico Madrid vs. Valencia: What to watch for

Atletico Madrid has actually held opponents scoreless in five straight matches if you count the team’s most recent Champions League triumph in Moscow. But the goal drought on Atleti’s end has to be concerning for coach Diego Simeone, as the team’s slipped ever-so-slightly behind Real Madrid and Barcelona in the La Liga standings. Diego Costa and Joao Felix haven’t exactly set up a partnership in the young Portuguese player’s debut season. Some kind of chemistry’s going need to formulate up top, though the defense can probably continue to do what it’s doing.

Valencia, currently eighth in the table, comes off a 2-1 win over Alaves before the international break. Though, the team’s still smarting from a 3-0 drubbing at the hands of Ajax in the previous Champions League match, after handling Chelsea 1-0 in its opener.

Both teams may be looking ahead to midweek Champions League action: Atleti will be hosting Bayer on Tuesday, while Valencia will travel to Lille for a Wednesday match to try to stay in knockout-round contention. But they clearly can’t overlook each other if they want to make return trips to Europe’s biggest stage next year.