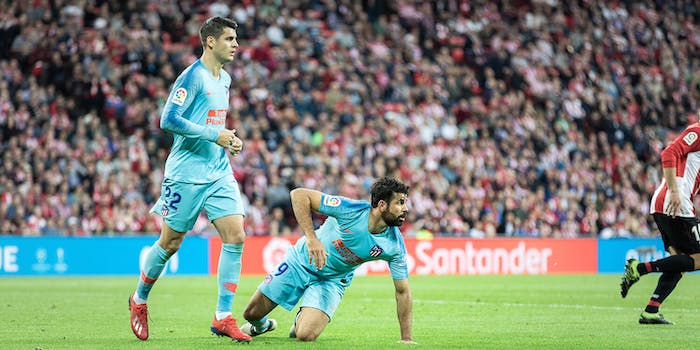 How to stream Atletico Madrid vs. Real Valladolid

Atletico Madrid hasn't been scored on in three straight matches, and will look to keep that up this Sunday.

Atletico Madrid’s gone three straight La Liga matches without giving up a goal. Indeed, on the season, the stout defense has only let in four goals through the first seven matches—a big reason why Atleti’s currently third in the league. The team will look to get back to winning ways, following a scoreless draw against its crosstown rivals last weekend, when it faces Real Valladolid on Sunday.

Here’s everything you need to know to live stream Atletico Madrid vs. Real Valladolid, including what to watch for on the pitch.

FuboTV is a solid TV streaming service option, whether your tastes run to entertainment (AMC, Syfy, FX), news (MSNBC, CNN), or sports (NBA TV, NFL Network). If you’re a soccer fan, however, it will appear tailor-made for you, with 10 beIN SPORTS channels, NBC and NBCSN, FS1, FS2, UniMás, and Champions League actions via TNT all on tap. If you can’t watch the Atletico Madrid vs. Real Valladolid match live, FuboTV offers a three-day replay for each match and 30 hours of cloud DVR. (Check out the complete FuboTV channels list.)

Spanish-speaking viewers have quite a few options to watch the Atletico Madrid vs. Real Valladolid game. For bilingual families, you might consider the Español: Best of Spanish TV package for either Sling Orange or Sling Blue for 24/7 specialty channel LaLiga TV and beIN SPORTS Connect: Channels 4-9, which features matches from La Liga, Ligue 1 and Copa del Rey, among others. Both packages cost $5 per month after your free trial. Sling TV Latino is another Spanish-language package for $10 per month, including NBC Universo, History en Español, and—of import to soccer fans—four beIN SPORTS channels. (And choosing Sling TV Latino + Sling Orange for $30 per month gives you access to ESPN Deportes.) For more information, check out our guide to Sling TV channels and our Sling TV review.

Atletico Madrid vs. Real Valladolid: What to watch for

It was a grind-it-out, scoreless affair for Atleti against Real Madrid last weekend, and losing Alvaro Morata to a red card the match before didn’t help matters. The team got a bit of its groove back in Russia midweek after winning 2-0 in Champions League play against Lokomotiv Moscow–getting 20 shots off–with Joao Felix and Thomas Partey hitting the back of the net.

Valladolid dispatched Espanyol 2-0 over the weekend to get to 11th in the La Liga standings, although Barcelona’s other team looks like a candidate for relegation, even this early in the season. The team’s best result of the year might be a comeback draw at the Bernabeu back in August, giving up an 82nd-minute goal to Karim Benzema, and then getting one back via Sergio Guardiola Navarro six minutes later. They’ve shown they can score when they need to … but can they score at all against perhaps the best defense in Spain? They’ll have to if they want to reverse the trend in this match up: Atleti’s won the last eight in this series.