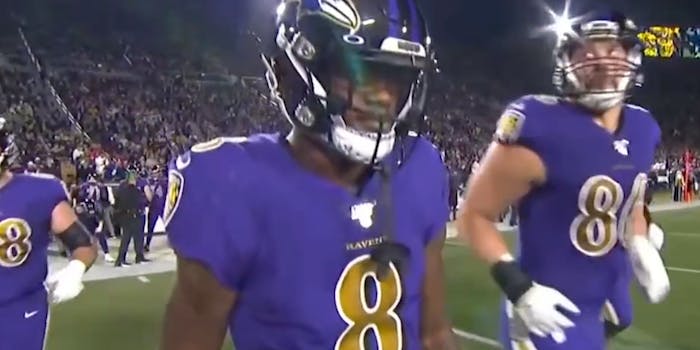 NFL Playoffs: How to stream Titans vs. Ravens live

The Titans knocked the Patriots out of the playoffs. They now face the likely NFL MVP.

The Saturday night game in the Divisional Round game of the NFL Playoffs features a run-focused Tennessee Titans against the league-best Baltimore Ravens.

All-Pro running back Derrick Henry racked up 204 total yards (182 on the ground) in the Titans’ Wild Card win over New England last weekend. QB Ryan Tannehill wasn’t much of a threat in the 20-13, finishing with just 72 passing yards on 8-of-15 passing, an interception, and two fumbles (both recovered), but he did enough to get them over the line.

He will have to prove himself a playoff-caliber signal-caller in a tough matchup, as the Ravens secondary ranks sixth in the NFL against the pass (207.2 passing yards allowed per game). The Ravens have held its final three opponents to just 156 passing yards per game. They’ve got the NFL’s No. 3 scoring defense, allowing 17.6 points a game.

The Titans have an above-average defense (12th in the league), but they’ll have to contend with likely MVP Lamar Jackson (265-401, 3,127 yards, 36 touchdowns, 6 interceptions) and the Ravens’ vaunted rushing attack. Everyone in M&T Bank Stadium will know the Ravens are coming downhill all game long. Baltimore averaged 206 rush yards per game this season, 62 more per game than second-ranked San Francisco. Running back Mark Ingram returns from a calf injury to help with that, though he’ll likely see limited action.

Here’s everything you need to know to live stream Titans vs. Ravens in the NFL Playoffs.

Ravens vs. Titans live stream: How to watch the NFL Playoffs online

The game is carried by CBS; you can live stream the game via these streaming services.

Tennessee Titans vs. Baltimore Ravens live stream: What to expect

Jackson vs. the Titans defense will be the key matchup in this Divisional Round showdown. Tennessee’s defense ranks 11th in the NFL against the run at 104.1 rush yards allowed per game. However, the former Heisman Trophy winner presents challenges no other player in the league does, in his ability to stretch passing plays and put defenses on their heels.

Amazing sign of the changing times: The top 2 are tight ends.

How Tennessee attacks Jackson’s top target, tight end Mark Andrews, will be key. Andrews accounted for 25 percent of the team’s receiving yards, to go with 10 touchdowns. In fact, Baltimore tight ends caught in 14 of the team’s 37 receiving touchdowns this season.