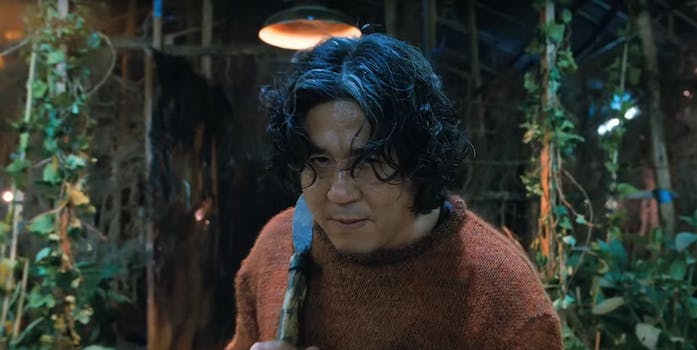 Let the right one in(to your queue).

Are you suspicious of everyone? Always looking over your shoulder? Think anyone could be a murderer? Then you’ll probably be into these serial killer movies on Hulu.

Mary Harron’s film adaptation of Bret Easton Ellis’ controversial 1991 book leaves out some of the more graphic and gruesome passages but leaves in the narcissistic flourishes and toxic masculinity of late-’80s New York City. Christian Bale is pitch-perfect as Patrick Bateman, a Wall Street banker who indulges his murderous fantasies, and Reagan-era materialism is on full display. (The business card scene never gets old.) That Bale went on to be Batman and co-star Jared Leto became the Joker only makes the film more amazing and perverse. —Audra Schroeder

This South Korean thriller pits two of the country’s most well-known actors (Choi Min-sik and Lee Byung-hun) as a serial killer and a cop, respectively. It’s a cat-and-mouse story, or maybe cat-and-cat is more appropriate, as Byung-hun relentlessly tracks and tortures the man (Min-sik) who killed his wife. The film is directed by maestro Kim Jee-woon, so you’re in good hands. I Saw the Devil is brutal and provocative, and if you have the stomach for it, it’s well worth a watch. —Eddie Strait

Can a movie about a couple that abducts and tortures women truly show the human element of their debased crimes? Hounds of Love tries, as its presents John and Evelyn White, and what happens in their home after drugging and kidnapping a teenager named Vicki. Much of the violence is heard but not shown, but it still has a nauseating effect. The focus is more on how warped their relationship is, and how Vicki knows she has to pit them against each other to survive. Even more chilling: The story mirrors the real-life crimes of David and Catherine Birnie, who in 1986 abducted five women over the course of a month, killing four of them. —Audra Schroeder

Serial killer Robert Hansen died in prison in 2014, just a year after this movie based on his crimes was released. John Cusack stars as Hansen, also known as the “Butcher Baker,” who raped and murdered sex workers in Alaska across the span of a decade while keeping up the appearance of a family man and business owner. Nicolas Cage plays the detective who’s tracking him, and Vanessa Hudgens plays Cindy Paulson, who escaped the real Hansen after he abducted her in 1983. —Audra Schroeder

In this 1996 reimagining of “Red Riding Hood,” Reese Witherspoon plays Vanessa, a troubled, abused teenager on her way to her grandmother’s house when she happens upon Bob (Kiefer Sutherland), a serial killer who trolls the highways for victims. He quickly reveals himself, and the rest of Freeway becomes a twisted dark comedy. —Audra Schroeder

Childhood is lonely, and when you’re poor and live in a small town, it can be even harder to find a good friend. It can lead to crazy things, like ignoring the fact that your new best friend is a vampire. Evil’s seductive tendrils are well-worn territory in horror, but Let the Right One In tackles why friendship can blind even the most innocent with cold-blooded finesse. The American remake is fine, but the Swedish original is a masterpiece. Few films can trick you into rooting for a child to be in danger. Let the Right One In makes you hope he never leaves his dark new companion. —John-Michael Bond

Depending on where you grew up, there was probably a regional urban legend about a haunted house or grisly murder. This 2009 documentary on Hulu focuses on Cropsey, a bogeyman of Staten Island—one directors Joshua Zeman and Barbara Brancaccio grew up hearing horrifying stories about. But as the film progresses, we learn he’s real. His name is Andre Rand, and he worked at the Willowbrook State School, a facility for mentally disabled children. Throughout the ‘70s and ‘80s, he was linked to a series of kidnappings and was eventually arrested. But the film also leaves us wondering if he was really guilty of the crimes, or if the myth and the man were conflated. —Audra Schroeder

The Chiodo brothers put out an American classic with this 1988 horror comedy. The killer clowns in question are indeed from outer space, and they’re hellbent on harvesting as many humans as possible. Along the way they come up with a lot of inventive ways to kill: balloon animals, pies, shadow puppets, cotton candy. —Audra Schroeder

Mickey Rourke’s private investigator Harry Angel takes on a case that brings him to New Orleans, where he meets up with a man named Louis Cyphre (Robert De Niro). Angel’s trying to find a missing singer, but soon people start dying around him, and he finds out Louis’ real identity. —Audra Schroeder

The poster for this 2017 movie does a great job of making it look like it’s from 1987. Too many donuts will certainly shorten your lifespan, but even more so when they have teeth and travel in bloodthirsty dozens. This serial killer movie on Hulu turns everything you thought you knew about donuts on its hole. —Audra Schroeder