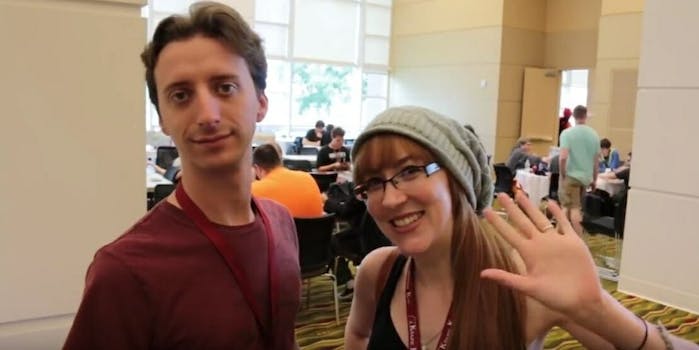 After infidelity and abuse accusations, ProJared said his wife wanted an open marriage

The public saga continues to be uncomfortable.

More than a week after YouTube star ProJared announced he and his wife were divorcing, which was followed quickly by her accusations that he was unfaithful and abusive, he is trying to regain control of the storyline.

ProJared, whose real name is Jared Knabenbauer, tweeted a statement Friday night in which he said that he and his ex-partner, Heidi O’Ferrall, had an open marriage, that she was the emotional abuser in the relationship, and that she threatened to expose him if he left the marriage. She immediately responded on Twitter and said his statement was full of “misdirection and lies.”

The drama began last week when O’Ferrall tweeted this.

But in his statement on Friday night, Knabenbauer said it was O’Ferrall’s idea to have an open, polyamorous relationship. He said she’s had several casual partners and a more serious relationship with somebody else since 2017. He also said that O’Ferrall encouraged him to tell Holly Conrad, the woman who is the third person in this love triangle, how he had developed feelings for her.

“When I did, things changed with Heidi,” Knabenbauer wrote. “She became angry and vindictive … She called me a ‘cheater’ and claimed that I was destroying the marriage because of my ‘affair’—even though she continued to have other relationships with other partners.”

Knabenbauer also said O’Ferrall threatened “to destroy my career and to harm others if I left” the marriage.

Said Knabenbauer, “I want everyone to know that any other interactions I may have had with any other women were known to, and encouraged by, Heid and were had with only the purest and lawful intentions.”

Unsurprisingly, O’Ferrall almost immediately responded on Twitter. She denied the idea that she wanted an open marriage and that he was gaslighting her.

“He says he only acted with my approval and this is nothing short of bullshit,” she wrote. “It’s legitimately insane. I told him in no uncertain terms that I was not comfortable with polyamory after he proved he could not be transparent with me. Countless people can corroborate this.

“It’s true that I knew from the start that he and Holly were interested in each other. I called them out in January 2018. I said, ‘Address this because I’m not blind and I’m not an idiot.’ I wasn’t comfortable with it. I was just trying very, very hard to accept my husband.”

In her initial tweetstorm about Knabenbauer, she also described how she knew fans of his had sent him their nude photos—and in the aftermath, young fans said they had done so when they were underage. Initially, O’Ferrall said it was “ostensibly a body-positive space for consenting adults” and that she approved of the solicited photos—in an old Tumblr post, she actually wrote, “he shows them to me and we high five about it.” But she said that he continued to solicit nudes even after she thought he was done with it.

In the aftermath of her accusations, Knabenbauer lost 120,000 subscribers in a 24-hour span.

On Friday night, O’Ferrall didn’t mind bringing up the nude photo controversy, especially the accusations that some of his fans were minors when they sent him naked images.

Now that Knabenbauer has made his statement and O’Ferrall has responded, perhaps it’s time for both parties to move on with their lives. At this point, though, it seems unlikely that this is the end of what has become a very public—and, at times, uncomfortably nasty—fight.