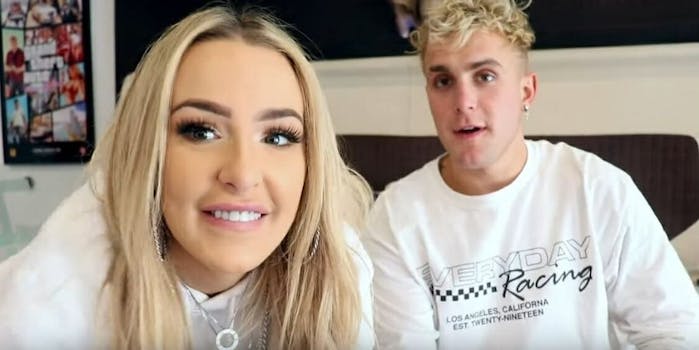 This could be real. Or maybe not.

Two of YouTube’s most controversial vloggers appear to have become a romantic couple. Jake Paul released a video Tuesday in which he declared—well, sort of declared—that he and Tana Mongeau were in a relationship.

Though Paul kept referring to Mongeau as a good friend—basically winking at the audience for the entirety of his vlog—it appears the two are more than that. Or maybe they’re not. After all, YouTube relationships and breakups are faked all the time for pageviews and notoriety.

But if this is fake, it’s a coordinated attack, because Mongeau also released a video Tuesday that was shot at Paul’s Team 10 house. Mongeau, who recently declared that she and her boyfriend, Brad Sousa, had broken up after he apparently cheated on her, called Paul her “rebound” and referred to them as having a “clout relationship.”

Here’s the video from Paul, who has more than 18 million YouTube subscribers.

The two are some of the most controversial YouTubers on the platform. Shane Dawson devoted an eight-part documentary series to determine whether Paul is a sociopath, and Paul’s ex-girlfriend, Alissa Violet, accused him of emotionally abusing her during their relationship.

Paul later went on to have a long relationship with Erika Costell before they broke up last November (though he continued to use the Costell drama for YouTube content for months afterward).

Mongeau was also the subject of a Dawson documentary after her video convention, dubbed TanaCon, was a complete disaster last summer. (Paul repeatedly made fun of her for that during his video.) Mongeau also faced controversy last year when she was accused of wearing a Halloween costume that sexualized 15-year-old JoJo Siwa.

The Paul-Mongeau relationship first came to light when Mongeau posted a selfie of herself lying in bed. Internet sleuths determined it was Paul’s bed based on what the headboard looked like, and suddenly, their secret—whether it was supposed to be a secret—was exposed.

That’s assuming the relationship is even real in the first place. But if it is real, both seem to realize already that this is pre-manufactured relationship potentially designed to expose themselves to the other’s fanbase for even more social media clout. Chances are, though, that at some point in the future, we’ll have to watch two more breakup videos on YouTube.