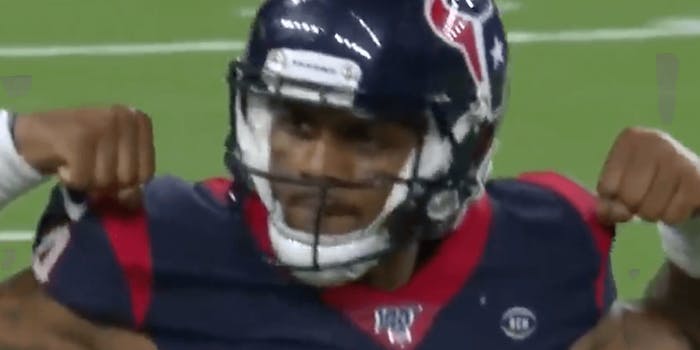 NFL Playoffs: How to stream Texans vs. Chiefs live

Deshaun Watson worked magic to get the Texans past the Bills. Can he do the same against the Chiefs?

The reality of this game, though, is that the Texans are fortunate to be in it. During Houston’s 22-19 overtime win in Wild Card Weekend, Buffalo rushed for 172 yards on 5.7 yards per carry. QB Josh Allen passed for 264 yards, and the Bills converted over half its third downs. However, Allen’s immaturity down the stretch led to four stalled drives, and the Bills simply didn’t have the right players to properly break down Houston’s 29th-ranked pass defense.

The Texans did have, to their credit, the greatness of Deshaun Watson, a magician that pulled defeat out of Buffalo’s more deserving hands.

We know everything we need to know about Kansas City’s offense, once again superbly led by last year’s league MVP Patrick Mahomes (319-484, 4,031 yards, 26 TDs, 5 INTs in his injury-limited 2019 action). However, it’s the Chiefs’ improving defense that could be key to a Super Bowl run. Finally healthy, the defense has been dominant over the last two months. The rush defense allowed just 87 rush yards per game in the final three games of the season, and its pass defense finished eighth this season, allowing just 221.4 yards per game.

Starting safety Juan Thornhill tore his ACL in the Chiefs’ Week 17 win over the Chargers; with Will Fuller possibly coming back, Watson could potentially stretch the Chiefs’ secondary. Carlos Hyde ran for 116 yards and scored two touchdowns in a Week 6 win over the Chiefs, and will need a similar performance to help the Texans pull off the upset.

Here’s everything you need to know to live stream Texans vs. Chiefs, including what to watch for on the field.

Texans vs. Chiefs live stream: How to watch the NFL Playoffs online

This game is on CBS, and will be available via the following streaming services.

This game is going to always come back to whether the Texans’ incredibly patchy defense is going to withstand the great pressure that Mahomes, TE Travis Kelce, and WR Tyreek Hill will exert on it.

The Texans’ J.J. Watt played 50 snaps and had a sack against the Bills in his first game back from a torn pectoral muscle injury that kept him out half the season. The three-time NFL Defensive Player of the Year wouldn’t tell ESPN if he expected to get more run.

“Just because I played one game doesn’t mean my pec magically healed. It’s still in basically the same situation it was in before this game,” he said. “After not playing football for two months, then playing 50-plus plays, you’re going to be sore, you’re going to be a little beat up. It was a quick reminder of how difficult the game of football is when I woke up on Sunday morning. That extra day was nice to be able to rest and recover and get back to work now with the guys.”