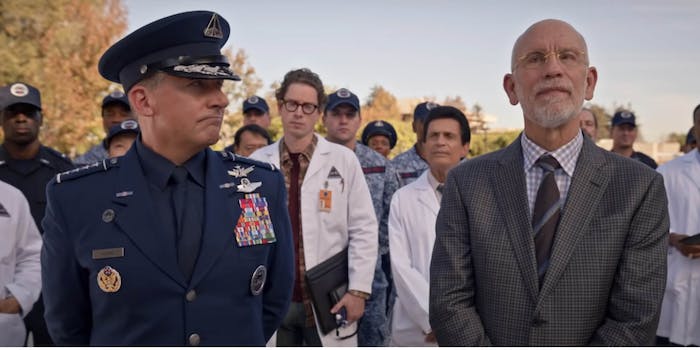 'Space Force' has the right stuff. Why isn't it funny?

When it was announced last year, Netflix’s Space Force felt like it was filling a void: The Office is leaving the platform and putting Steve Carell in another workplace comedy from the U.S. version’s creator, Greg Daniels, checked a lot of boxes. And it was apparently going to parody Trump’s own Space Force. That would be funny, right?

But the 10-episode series debuts as that new branch of government has already become a parody. Earlier this month, the Space Force flag was unveiled and Trump teased a “super duper missile” that’s 17 times faster than a regular one, which, as many people pointed out, doesn’t make any sense. How do you compete with that?

Space Force isn’t The Office, and that’s good. The mockumentary, react-to-the-camera genre has peaked. Carell plays General Mark Naird, whose photo was recently taped over the actual Chief of Space Operations, General Jay Raymond, though it’s not clear if Netflix was behind that. Naird’s in charge of getting Space Force taken seriously, and tempering people like Dr. Mallory (John Malkovich), a scientist who isn’t a fan of space being militarized. There’s a bit of Michael Scott’s bluntness to Naird, but not much of a personality between annoyed and pensive. Carell was positively devious as Donald Rumsfeld in Vice; that’s what the role called for, of course, but some of that is missing here. Perhaps he’s just playing a military man really well.

Lisa Kudrow plays Naird’s imprisoned wife Maggie, but unfortunately she’s not in the series enough. His angsty daughter Erin (Diana Silvers) gets more of a storyline, but the show doesn’t really know what to do with her either. Space Force is full of comedic talent: the late Fred Willard, Jane Lynch, Patrick Warburton, Kaitlin Olson, Diedrich Bader, Ben Schwartz, Jessica St. Clair. But it mostly uses them as oh-look moments, not to deepen the comedy or narrative.

The relationship that gets the most focus is Naird and Mallory, the military man versus the scientist, and it really picks up once Mallory loosens his tie. That tension funnels into the series’ bigger satire of men in charge and performative patriotism. Naird is called to testify at a congressional hearing about Space Force spending, where a congresswoman who is definitely supposed to be Rep. Alexandria Ocasio-Cortez grills him about the budget. There’s also a Nancy Pelosi stand-in and the president, well, you know.

While Stanley Kubrick’s Dr. Strangelove was an influence, it’s missing that dark humor, that deeper focus on the consequences of delusion, toxic masculinity, and political incompetence. Episode two comes close: It’s almost entirely devoted to navigating a trained chimp, via video feed, to fix a satellite. It goes awry and the men in charge stand by and watch the big board. Naird vows to save the chimp before conceding he’s going to die anyway. So timely! It also sets more of a tone. But the episodes after that slowly drift off.

It’s not good when you check how many more episodes of a series there are, and are disappointed when you find out. Throughout Space Force I kept wondering: When does something happen? And it just kind of leaves you in that void.