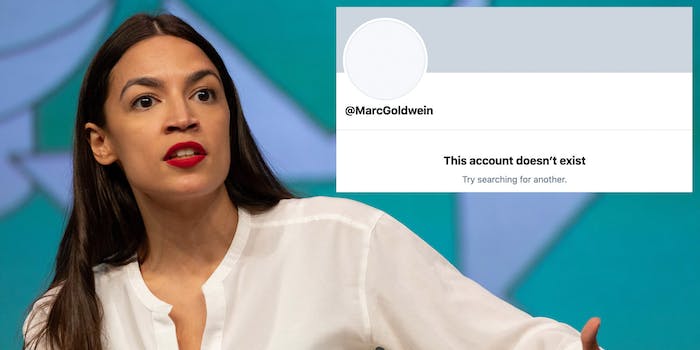 The politician's joke led to a heated debated online.

A Twitter user appears to have deleted their account after getting called out by Rep. Alexandria Ocasio-Cortez (D-N.Y.).

The incident began on Wednesday after the politician weighed in on the news that philanthropist Bill Gates was attempting to convince his fellow billionaires to donate more money to coronavirus relief.

“If only there were some public fund billionaires could pay into along with everyone else that helps fund our infrastructure, hospitals, and public systems all at once,” Ocasio-Cortez jokingly said, referring to taxes. “It could even be a modest % of what they earn every year. We could have an agency collect it and everything.”

The joke was perhaps not apparent enough for some, including Marc Goldwein, Senior Vice President and Senior Policy Director for the Committee for a Responsible Federal Budget.

Goldwein quote-tweeted Ocasio-Cortez and noted that what she had described was “an income tax.”

The politician responded: “Quite amused by the men in my mentions volunteering to explain my own joke to me.”

The Daily Dot reached out to Goldwein to inquire as to what happened to his account but did not receive a reply by press time.

But Ocasio-Cortez wasn’t done. The Democrat went on to accuse Goldwein of being misogynistic as well.

As with any issue, reaction to the back-and-forth appeared to fall largely along partisan lines. Supporters of Ocasio-Cortez praised the politician for pushing back against Goldwein.

But others accused the politician of mischaracterizing Goldwein’s tweet, alleging that his response was actually a joke as well.

Whether Goldwein will return to Twitter anytime soon is anyone’s guess.