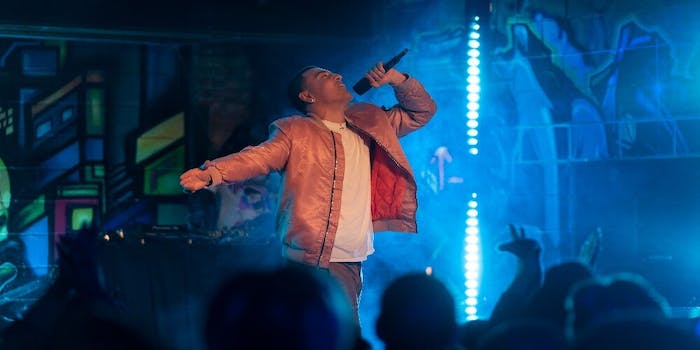 Hip-hop gets its own version of American Idol with Netflix’s competition show Rhythm + Flow. You’ll know from that description whether it’s for you. Rhythm + Flow is a slickly produced show that gathers amateur rappers from across the country to compete for a $250,000 prize. If you’re a fan of hip-hop, you’ll find Rhythm + Flow to be a fun watch. If rap isn’t your bag, but reality shows are, then it still has something to offer. The sense of competition that has driven rap since its inception carries over to the show and energizes it. Rhythm + Flow is standard-issue in its format and structure, but the personalities of the hosts and contestants keep it engaging.

It’s easy to get caught up in the fun of Rhythm + Flow. Hosts T.I., Cardi B, and Chance the Rapper have good chemistry, and it’s interesting to hear the perspective of two artists at the top of the game and one who’s maintained his success for more than 15 years. They make for a lively, informative panel and match the energy of the performers. Each of the first eight episodes sent out for review flies by, and Netflix’s release schedule makes it an easy binge.

The first four episodes come out this week, taking viewers through the audition round. The show hits Los Angeles first, followed by stops in the hosts’ hometowns of Atlanta (T.I.), Chicago (Chance), and New York (Cardi). The main hosts stay separated while in their hometowns, joined instead by high-profile guests. Some are easier to guess than others (you already know we aren’t getting out of Atlanta without seeing someone from OutKast), and they all bring a different energy. Like every music competition, the audition round is hit or miss, talent-wise. But even the bad performances are still interesting.

Once the audition phase is over, Rhythm + Flow hits its stride. Episodes 5 through 7 see the contestants competing in cyphers, battles, and music videos. The mistakes stand out more, revealing the pressure these contestants face, but so do the talent and perseverance. One cypher shows both sides of that coin: Jakob Campbell, one of the few white rappers to survive auditions, drops a line and jumps right back in without missing a beat. The next MC, Onetake Carter, fumbles a bit about getting money and jumps back in with, “I’m a prostitute.” T.I. calls him on the flub, and backstage, Carter tells his cohorts, “I’m about to be a meme.” It’s an honest moment that reveals personality as well as what the show could mean for the up-and-coming rappers.

Rhythm + Flow is the rare show that makes you want longer episodes. My only qualm is that I wish it had spent more time with the mentors during the song creation process. Some of the guests feel superfluous due to the time constraints. When the contestants pop over to DJ Khaled’s home for a lesson on sampling, it feels more like an excuse for Khaled to dazzle the amateurs with his opulent house. On the other hand, the contributions from renowned freestyler King Los are some of the show’s best moments. He incisively breaks down the artists and offers specific advice and critiques that give his appearances substance.

I don’t normally watch competition shows (except for the GOAT American Ninja Warrior), but I’ll be back in a couple weeks when the final two episodes of Rhythm + Flow drop. That’s probably the strongest endorsement I can give the show. It’s hard to stay invested in competitions that stretch out for too long, but the show’s condensed time-frame keeps it enticing. Each episode also ends right before announcing an elimination. It’s a cheap gimmick that the show doesn’t necessarily need, but it does keep viewers coming back for more.

No reality show is complete without the moving backstories that shape its contestants. The producers latch on to a handful of them here, and viewers get to know these aspiring rappers well over the course of Rhythm + Flow. But even competitors who don’t last long still provide something noteworthy. This is a no-frills show that lets the music—and the personalities of its contestants and hosts—do the talking. That’s a winning formula for Rhythm + Flow.