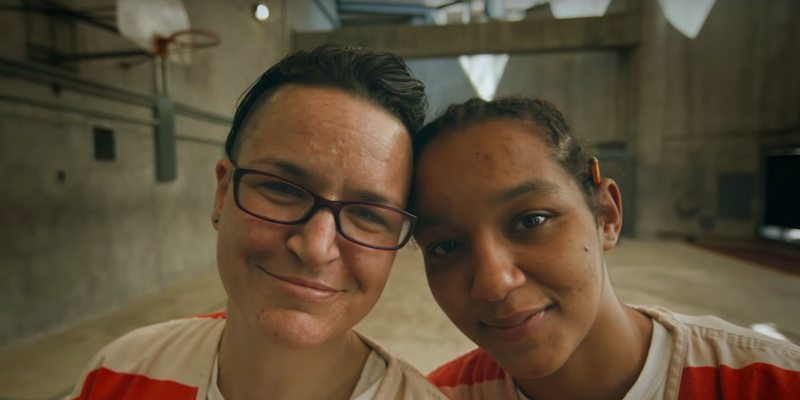 The reality show sinks under its own vapidity.

Gaylon “Shawn” Beason is all set to get out of the Sacramento County Jail after finishing her sentence. She’s dressed, her wife is there to pick her up, and she’s ready to resume her life. Then the call comes—due to some ticky-tacky reasoning, Shawn suddenly isn’t leaving jail today. She looks shellshocked as she changes back into her orange jumpsuit. It’s a gut punch for Shawn, and one of the most honest and compelling moments of Netflix’s new reality series Jailbirds, which shows life for inmates inside the Sacramento County Jail. It’s a damn shame that Jailbirds is more interested in being Real World: Sacramento County Jail than exploring more of these moments. These rare instances keep the show from being unwatchable, but it’s still soul-crushingly bad.

Jailbirds follows a wide cast as they work through their sentences and their personal drama. Taken on an individual basis, these people are interesting, and their stories are worth telling. But on the whole, they blur into a large group of people mired in nonsense. Drama and gossip are boring as hell, and the only people who care about them are the people involved. That’s true in high school, it’s true in adulthood, and it’s most definitely true in Jailbirds. To watch these people share their struggles with an audience and walk away feeling only contempt upsets me. The blame should fall on the show’s producers and not the people onscreen.

Despite the Sacramento County Jail hosting men and women, Jailbirds focuses most of its attention on the women serving their time on the seventh floor. The show jumps around indiscriminately, following some stories for multiple episodes and bailing on others. Episode 1 starts with Yasmin, a 19-year-old, first-time offender who’s in for a carjacking. She makes numerous phone calls regarding her bail, and eventually the reality of her situation sets in. That realization is a powerful introduction to Jailbirds. It also sets the bar too high. After Yasmin is escorted to her cell, we barely see her for the rest of the series.

Someone we see a lot of is Megan, who goes by the nickname “Monster,” which she has tattooed over her left eye. Monster is constantly stirring up trouble or goofing around with her best friend and cellmate Noonie. Monster talks about wanting to change (a familiar refrain on Jailbirds) during her private interviews. It’s believable, and it’s something for viewers to latch onto. But it’s just one piece of the Monster puzzle, and the other pieces offer a less optimistic image. That’s common throughout Jailbirds. Anything we glean from the people on this show comes from the confessional interludes. Outside of the one-on-ones, we see a lot of posturing, which serves as its own kind of brief insight.

The problem is that the camera loves the drama. By the tenth time we hear someone yelling threats at another inmate, the impact has completely worn off. The show emphasizes other bits, like the way the inmates use the toilets as a phone network. Many of the inmates also make pruno, an alcoholic drink that comes from hoarding fruit and allowing it to ferment for a week. These bits provide helpful windows into the minds of the inmates. It’s difficult to imagine the kind of mental strength it takes to get through a jail sentence, so I can appreciate what the toilet phones and prison wine represent.

Jailbirds’ greatest success is that it serves as further proof that our prison system has zero interest in rehabilitation. At the very least, the system isn’t built to offer true rehabilitation to those who seek it. Jail, as it’s always been depicted, is something you endure. Hopefully one stint is enough, but as we learn from many of the incarcerated people in Jailbirds, it often becomes a routine.

Jailbirds could have taken an unflinching look at America’s fractured prison system. Instead it settles for a superficial approach to tough material. Through its snazzy graphics and Cribs-style fast-tracking camera movements, Jailbirds has the sheen of a reality TV show. There is so much pain and anguish on display here, but the show doesn’t want to explore the true realities of these scenarios. It would rather focus on things like the men on the eighth floor using the toilets to flood the cells of the women on the seventh floor. This vapidity is what sinks the show. Treat Jailbirds like you would treat jail, and make it your mission to avoid both.