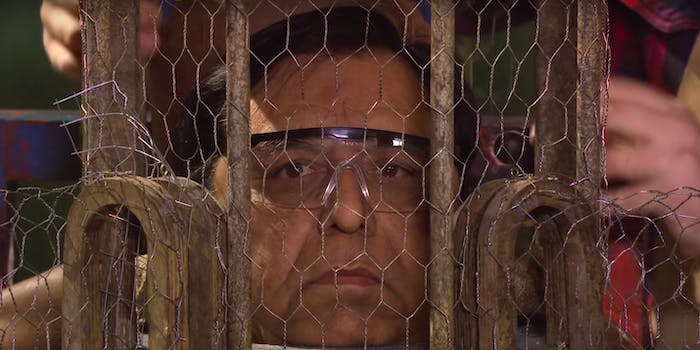 ‘Flinch’ is an absurd game show with little at stake

It was only a matter of time before somebody created a show this pointless.

I went on some kind of emotional journey while watching Netflix’s Flinch. It’s a game show with no discernible reason to exist, and yet here it is. Flinch is the equivalent of killing a Friday night with friends doing dumb stuff for laughs. It’s a game of silliness, designed to push the boundaries of what we’ll watch. I’m sincerely bewildered and tickled by Flinch. Over five hours I felt everything from mild amusement, to tedium, to bewilderment, to despair, and back to amusement. Am I better off for having seen Flinch’s first season in its entirety? Will you be better off for watching even a single episode of Flinch? Is the world a better place for having Flinch in it? I think the answers are clear: No, no, and yes.

RELEASE DATE: 5/3/2019
DIRECTOR: Joseph Campo, Dave Skinner
STREAMING: Netflix
‘Flinch’ is a game show with the simplest premise imaginable: Stand stock still in the face of all manner of diversions, or face the consequences.

Flinch is a game show designed to push the human will to the absolute brink of insanity. A world of unspeakable torment awaits the game’s players and a mounting dread for its three hosts. The show takes place on a small farm in Ireland. In the main house, the three hosts—Desiree, Lloyd, and Seann—meet the contestants. From there, the hosts and audience stay and gather around a monitor while the contestants walk over to the barn.

The contestants are put in an array of situations and given one task: stay still at all costs. Each player is strapped into a chair or bound standing to a board. They face down tests designed to provoke a physical reaction. These tests include popping balloons, screaming whistles, swinging tires, flying balls, chickens, emus, weasels, rats, toy trains covered in rotten food, chainsaws, paintball guns, whips, and so much more. If it pops, crawls, crashes, or smells, it’s used against players.

If the contestants stand still, they advance to the next round. If they flinch, they get a shock, slap, smack, or dunking as punishment. When players flinch, one of the hosts gets a point. At the end of the episode, the host with the most points must face their own forfeit challenge. Players, other hosts, and a small audience crowd around to cackle at one final indignity.

Like most things in life, I imagine Flinch is much better if you’re there. The game is the kind of simplistic lark that can only come from extreme boredom. Even though I’m taking the piss out of this show, I need to make it clear that I am absolutely not looking down on it. As someone who has stayed up all night playing H-O-R-S-E on a Nerf basketball set, I assure you I am not above the antics of a game like Flinch. If anything, I’m jealous I didn’t come up with the idea. Flinch is for people who enjoy Wipeout but don’t want to see people get hurt. It’s Jackass for people who don’t want to flirt with danger. That’s why Flinch’s amusement level doesn’t reach as high as those shows.

The most confounding aspect of Flinch is that the players aren’t even competing for a prize. There is literally no reason for these people to debase themselves for our amusement. Yet there they are, jumping at every loud noise and jumping again when they get smacked for their initial transgression. Desiree, Lloyd, and Seann laugh hysterically and crack jokes throughout the episode. When the “loser” host takes their medicine, the other two derive a perverse amount of joy from their punishment. The hosts are paid for their time, so I get why they’re playing. I can only hope the players get something, too. After the first episode of Flinch, I had seen all I needed to see. By the fourth episode, any enjoyment I felt had completely evaporated. By the eighth episode, I couldn’t stop watching because I had convinced myself a big reveal was coming.

There is no reveal. There is only flinching. So much flinching.

Why does this show exist? Rather, why wouldn’t this show exist? With infinite possibilities, it was only a matter of time before a show like Flinch came along. Idiocracy foretold the prophecy over a decade ago with its in-movie game show Ow! My Balls! For what it’s worth, the people in Flinch appear to have a grand time playing the game. I just wish their laughter were infectious. In the spirit of Flinch’s DIY aesthetic, I recommend gathering a group of friends and making up your own dumb game. Maybe play Flinch in the background as inspiration.