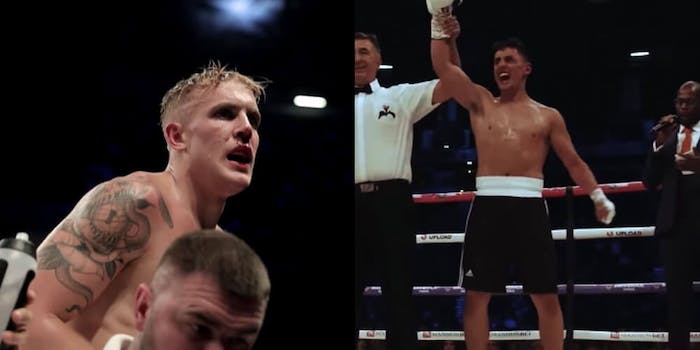 'This bout has deep roots.'

After months of speculation, YouTuber Jake Paul has confirmed what everyone has been waiting to hear—he’s jumping into the boxing ring yet again.

The official Twitter account for sports streaming service DAZN announced the fight on Monday night. Paul will be facing off against fellow YouTuber AnEsonGib (known as Gib) on Jan. 30 in Miami.

Both Jake and older brother Logan have been engaging in these social media influencer boxing matches over the past couple years. While Jake won his match against YouTube star Deji in 2018, Logan recently lost a rematch against Deji’s older brother, KSI.

The younger Paul spent the early months of 2019 begging KSI for a match of their own, and some folks think that fight could still be on the table. But for now, Jake will have to face off against KSI’s best friend, Gib.

“This bout has deep roots,” Paul told DAZN. “It’s a fight for my brother’s honor, my pride and most importantly my loyal fans who are among the best in the world. This is the American dream…My opponent’s 15 minutes of fame [will] turn into 10 seconds of counting stars as he lays unconscious on the canvas.”

For his part, Gib, who won his own 2018 YouTuber match against Jay Swingler, has been itching to fight Jake for months. Gib even went so far as to confront the younger Paul at a press conference.

“After six months of Jakey ducking, the fight is finally going down. He had no choice of his opponent, I chose him,” Gib told DAZN. “Since my last fight, I have been training nonstop and [in] January in Miami, I will end the fight in devastating fashion and will have my hands raised in front of his country, family, and friends. Jake Paul is going to be my walking, talking ad for the rest of his days.”