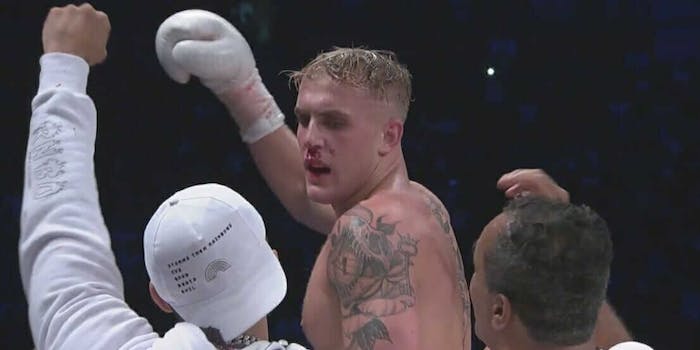 Is Jake Paul going to fight again? There are plenty of clues

It could happen next month.

Coming off the success of the rematch between KSI and Logan Paul in their YouTube boxing extravaganza earlier this month, it appears Jake Paul is getting ready for his own fight. Nothing has been announced for the younger Paul, who knocked out YouTuber Deji in their 2018 amateur contest, but the clues are evident.

And it makes perfect sense. KSI vs. Paul II was a successful venture for the DAZN streaming service, and Eddie Hearn—who runs the Matchroom Boxing promotion company—is on record saying he wants more YouTube beefs to be settled professionally in the ring.

Though Paul did not respond to a Daily Dot request for comment, his Twitter and Instagram accounts show he’s been working with Ryan Garcia, an undefeated boxing prospect and social media star who’s become friends with the Paul family.

we had a blinking contest.. who do you think won?

The Athletic previously reported that Hearn was looking at placing Paul on an undercard in December. The only Matchroom Boxing card for the rest of 2019 that would make sense for Paul would be the Daniel Jacobs vs. Julio Cesar Chavez Jr. event on Dec. 20 in Phoenix. But when asked by the Daily Dot this week if there was any news on Jake Paul fighting, a Matchroom spokesperson said, “There is no update on this.”

Still, it seems likely that Hearn and Matchroom will move forward with more YouTubers, particularly since about 12,000 people filled Staples Center to watch the KSI-Logan Paul main event and because it reportedly earned plenty of new DAZN subscriptions.

“We’re numbers people in this game. Everyone is. Anything that delivers is good news for everybody. What we can’t do is turn into a circus and have random people fighting each other all over the place,” Hearn told Boxing Scene. “[KSI vs. Paul II was] a one-off in that respect for me in terms of headlining a card, with a world championship undercard. I don’t think you’re going to see that a lot. Will you see other YouTubers fight on undercards moving forward? Much more likely.”

Thanks to KSI and Logan Paul, DAZN produced huge numbers on YouTube. In three videos immediately surrounding the fight—a preview, fight highlights, and postfight interviews—more than 22 million combined viewers watched on DAZN’s YouTube channel. The only other recent DAZN YouTube videos to cross the 1 million mark were other KSI-Paul productions and highlights of Canelo Alvarez, the biggest star in boxing.

“Looking at the pre-buy numbers was blowing my mind. It was at the same level as an Anthony Joshua fight, or even bigger,” Hearn said, referring to the former heavyweight champion. “They have earned the right to be here because they’ve built a brand and profile and they are taking it seriously.”

One potential opponent for Jake Paul, who has 19.7 million YouTube subscribers, is AnEsonGib (nearly 2 million subscribers). The two nearly got physical with each other in the leadup to the KSI vs. Logan Paul fight, and Jake Paul told the Mirror earlier this month, “The U.K. fans, KSI fans, they all say I’m ducking him, and my message to you is this guy sucks at fighting, I’m going to beat his ass one day and he’s 5-foot-8, got tired in five minutes in his last fight, and punched himself in the face two times. What is this kid doing?”

Logan Paul and KSI both received a guarantee of $900,000 for their second bout together. It sounds like AnEsonGib wants a little more than that.