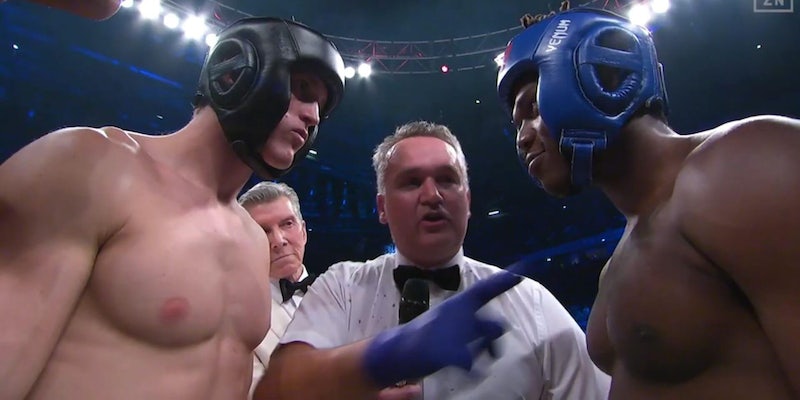 Jake Paul is begging to get on Logan Paul-KSI undercard

Since it seems the undercard of the upcoming Logan Paul vs. KSI rematch will be filled by professional boxers, Jake Paul doesn’t have a spot. But he wants one.

Now, he’s been reduced to trying to convince Eddie Hearn, the CEO of promoter Matchroom Boxing, why he deserves to fight on Nov. 9.

In a video posted on Thursday, Jake Paul—who knocked out YouTuber Deji last summer on the undercard of the first match between KSI and Logan Paul—told off KSI and “your bullshit-ass team.” Paul added: “I got fucked.”

He accused KSI of trying to keep him away from Saturday’s fight press conference in Los Angeles because KSI was afraid Jake Paul “would steal his limelight.” It doesn’t make sense to Paul because he’s been a part of the KSI-Logan Paul narrative since the beginning.

“Fuck you, KSI,” Paul said. “I cannot wait until we get the opportunity to fight. I am going to fuck you up … I want to fight that bloody bitch, that bloody, slimy son of a bitch whose music fucking sucks.”

Then, he tweeted at Hearn, basically begging to allow him to compete.

This week, there were rumors that Paul would reignite his online feud with Soulja Boy, fueled by Soulja Boy’s manager mentioning in an Instagram post that the two would battle on the Nov. 9 undercard. That, though, apparently isn’t happening. There have also been rumors that Paul could fight Fouseytube.

Some in the YouTube community are upset that championship-level boxers like Billy Joe Saunders and Devin Haney could compete on the undercard instead of YouTubers. But Hearn isn’t interested in making this a novelty event. That’s why he insisted on Logan Paul and KSI not compete with headgear and that’s why he’s having them wear 10-ounce gloves, the standard for professional boxers.

“On the undercard, we want world championship boxing,” Hearn said, via Bad Left Hook. “We don’t want other YouTubers and celebrities. No, this is a chance for boxing to bring in new fans. And if we’re going to bring them in, we have to show them the greatness of our sport. So that’s the reason behind that.”

“Let them watch the great young fighters on the undercard, let them watch great world championship boxing. Bring that massive audience into the sport, make them stick—they won’t all stick but some will—and that will grow the sport.”

In his video, Jake Paul said he could be an asset for that goal.

“Eddie, people want to see me fight…” said Paul, who added that his bout vs. Deji had more concurrent viewers than Logan Paul vs. KSI. “I will be an additive to help you accomplish your goal of making history by creating one of the biggest fights ever. I have a different demographic than KSI and Logan. Their audience is older and more mature. I come from Disney. I have the families. I have the younger kids, the younger audience.”

For now, there are no official undercard fights, but some are likely to be announced at Saturday’s press conference. Perhaps Jake Paul just gave himself a better chance to be involved.