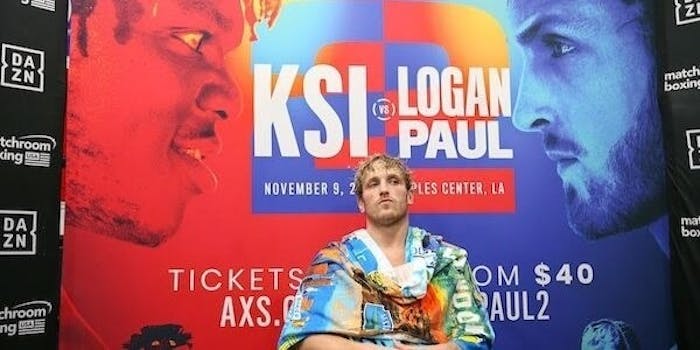 It's not a joking matter.

As he prepares for his Nov. 2 YouTube boxing match with KSI, Logan Paul made a startling statement about the state of his brain. While training for his fight, which can be live streamed on DAZN, Paul said he’s taking plenty of damaging punches to his skull while sparring.

Which led him to this conclusion.

“Sparring is a fast track to success because you get good quicker,” Paul said, via the Independent. However, it’s dangerous. It’s very taxing on the body. You’re getting hit in the head constantly. Boxing is a sport that goes hand-to-hand with brain damage. I don’t know if you can tell, but I think I’m already suffering from it.”

It’s unclear if Paul is trying to be funny here. But considering at least four boxers this year have died in the aftermath of their bouts—including Patrick Day on Oct. 16—his statement is not something that should be taken lightly.

It’s also not the first time Paul has claimed to have suffered from brain damage. In February, Paul released a YouTube video in which he said he underwent a brain scan. The results, he said, showed that a previous head injury caused brain damage and that it affected his abilities to have empathy and to maintain a human connection.

“You’re going to have trouble with focus, forethought, organization, planning, empathy, and learning from the mistakes you made,” the doctor told him at the time. “We need to fix this. If we don’t fix this, no matter how successful you are, you’re not going to make the decisions you need to move your life in the direction you want.”

If all of that is true, getting punched in the head during sparring and then taking more damage from KSI in the actual fight is probably not advisable. But it doesn’t sound like Paul has any intention of not taking on his YouTube rival for a second time after the two battled to a draw last year.

“There’s so much on the line between me and KSI. There is so much on the line. Egos, subscribers, the crown of ‘The YouTube King,’” Paul told reporters after a media workout this week. “The last match was a draw. If the W is secured in a monumental way, something similar to when Conor McGregor knocked out Jose Aldo, if something like that happens, it is going to be long-lasting form of stardom.”