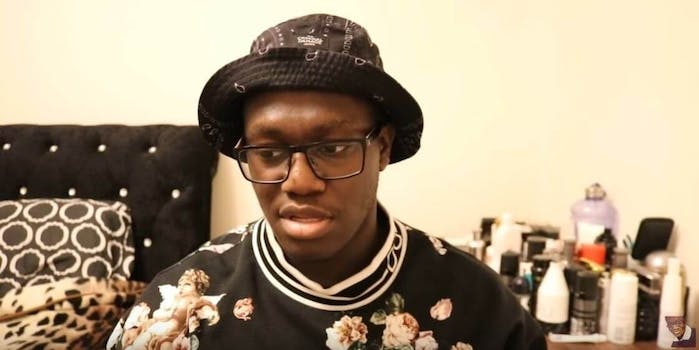 He’s not ready to stop fighting, though.

YouTube star Deji says his dog will have to be “destroyed” after the pet bit an elderly woman twice and caused her apparent significant injuries.

In a video posted to his channel on Wednesday titled “its (sic) over,” Deji, whose real name is Deji Olatunji, said his dog would have to be put down.

“We’ve never had an incident with Tank before,” Deji said. “But obviously, we had this one incident. I don’t know how to put this lightly, it saddens me to tell you guys that Tank is going to be destroyed. It really does suck.”

Deji lovingly called Tank a “crazy, hyperactive dog” and said that “I loved him to bits.” But according to the BBC, an assessment of Tank presented to the British court found that he “didn’t come across as a friendly, sociable dog.”

In September, Deji took the blame. According to reports, Deji’s mother let the pet out of their home in July 2018, and Tank attacked an elderly neighbor.

Originally, Deji said the dog only “nipped” at the neighbor after the woman provoked him. Deji also accused the police of stealing his pet and for training Tank to become a K9 officer. Deji and his older brother, KSI, had also promoted a Change.org petition to “save our dog Tank.” More than 440,000 people signed it.

Eventually, Deji’s mother, Olayinka Olatunji, and Deji pleaded guilty to two counts of owning a dog that was dangerously out of control. At the time of his plea, Deji promised his 9.9 million subscribers that he would be getting Tank back in his possession, but that’s most likely not going to happen now.

“My reasoning for me pleading guilty is because we were fighting for so long and we weren’t getting anywhere,” Deji said in his video. “I wanted closure. I just wanted Tank back. That’s why I pled guilty. I love fighting, but I just put my head down and said, ‘What’s best for Tank?’”

Deji, though, said he’s not giving up. In his video, he said he would appeal the court’s order and asked his fans for help.