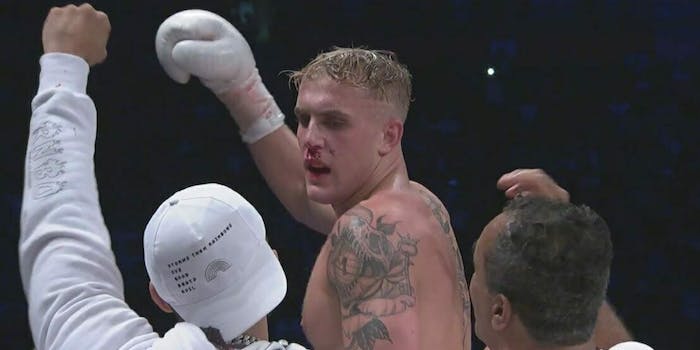 Jake Paul calls out KSI for a YouTube boxing match

The trash-talking is at a fever pitch.

Since his victory last summer, Paul has been itching for a fight. Earlier this month, he got into a verbal confrontation with Soulja Boy and offered $20 million to make that physical fight happen, saying “There’s just a lot of controversy around him. I think people would love to see him get knocked out. I’m sure people want to see me get knocked out, so I think that’s why it’d be a big fight.”

But in an Instagram story posted on Wednesday, Paul said he wanted nothing more than a fight vs. KSI—who battled Jake Paul’s older brother Logan to a draw last August.

KSI and Logan Paul are supposedly contracted to have a rematch, but there is no firm date or venue for that battle. KSI said recently he won’t fight Logan Paul until November, saying “It’s not happening in February. I’m OK with that. I’ve got my own shit going on.”

At the time, KSI was having all sorts of family drama with Deji, a conflict that caused them to lose thousands of YouTube subscribers. That feud seems to have subsided.

Meanwhile, Logan Paul has been trash-talking his former and potentially future opponent, warning he’ll replace KSI with somebody else if they can’t reach a deal.

“I felt about a month ago [KSI’s] team seemed sort’ve uninterested in pursuing the conversation about the fight and actually making progress to make it happen,” Paul said, via Metro. “I was unsure if he was going to still do it because guys, I’m still training, and by the way I’m not training for no reason, not to stay in shape.”

With KSI apparently planning a music tour, Logan Paul said, “Seriously though, fuck you, because here’s why. You either a) aren’t going to have time to train or b) have no interest in actually fighting me again. You already broke the contract, I’m just saying, who’s the fucking pussy bro?”

KSI hasn’t responded to Jake or Logan Paul, though earlier this month, he remembered on Instagram his YouTube boxing match victory vs. Joe Weller a year earlier. He wrote, “On this day, history was made. February the 3rd, 2018, the highest viewed white collar boxing fight ever. And ya boy came out victorious. I’m ready for the next challenge whenever it comes. #HeNeedsToThrowAPunch #AndStill”