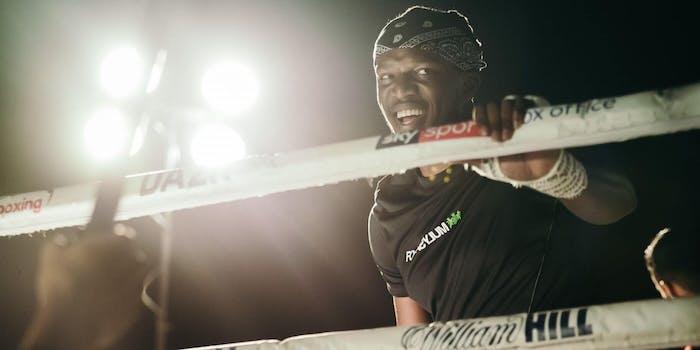 Since KSI beat Logan Paul by decision in the rematch of their YouTube boxing extravaganza last month, he hasn’t been shy about wanting another fight. He’s 1-0 as a professional boxer (his other fights vs. Paul and Joe Weller were considered amateur bouts), and since he made a $900,000 payday vs. Paul, KSI is looking for his next opponent.

On Thursday, online sports book Bovada released betting odds for who KSI could fight next, and unsurprisingly, YouTube star Jake Paul is one of the favorites.

Here are all the odds released by Bovada.

FaZe Sensei fought on the undercard of the first KSI vs. Paul fight last year and won by TKO against Overtflow. He’s also sparred in the ring with KSI. He and Jake Paul have verbally jousted in the past, and FaZe Sensei, as you might ascertain from his gaming name, has a karate background. Jake Paul has been rumored to be on an upcoming Matchroom Boxing-promoted card—perhaps against AnEsonGib—and KSI and Tommy Fury, a reality TV star who has had two professional fights, have also verbally battled.

Last month after his victory vs. Logan Paul, KSI told the Daily Dot that he was more interested in fighting celebrities.

“I need to be smart with it,” KSI said. “There’s no point in me jamming in [random boxers]. It’s not a level up. I know there are so many boxers that are trash. They’re pros but they’re trash. Why would I do that? I don’t know. It wouldn’t do anything for me. Me fighting celebrities, instantly that’s a huge draw, a huge amount of attention. People are intrigued. I’m 1-0 right now. I might as well fight people who are on a similar level but who have way more attention (than most neophyte boxers would).”

That’s where an entertainer like Soulja Boy and Brown—both of whom have been called out by Jake Paul in the past—or Bieber, who supported Logan Paul in his KSI fight, could come into play. Hearn, meanwhile, is a boxing promoter who brokered the rematch, and out of anybody on the above list, he’s the least likely to step into the ring with KSI—even if it meant millions of dollars.