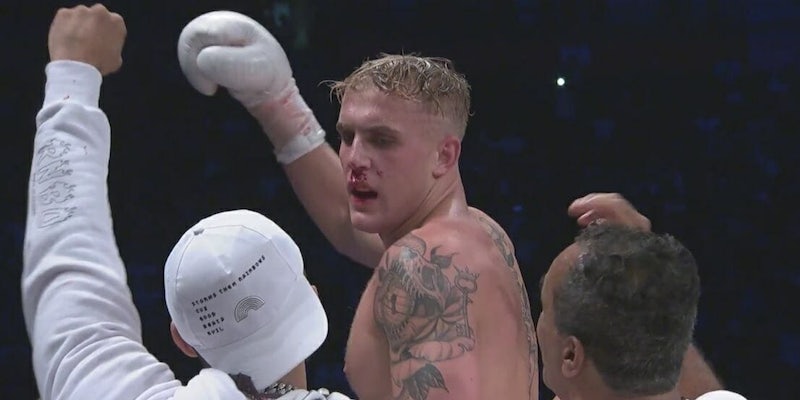 Deji's corner had to throw in the towel.

After months of trash-talking between two YouTube stars, Jake Paul pummeled Deji until his corner threw in the towel in the fifth round, handing Paul the TKO victory on Saturday.

Paul entered the ring wearing a “Fuck Jake Paul” necklace, but clearly, he was filled with confidence. Deji managed to perform better than many observers could have expected, but by the middle of the fifth round, Paul was pounding him in the corner and Deji’s corner ended the fight.

“I feel amazing, man,” Paul said afterward. “I worked so hard for this. Deji fought an amazing fight. I respect him. I hoope he learned a lesson about the things he said, because he said some shit about my family that wasn’t cool. But much respect to Deji. No hard feelings.”

As many as 820,000 YouTube viewers paid $10 to watch the fight, and a loud Manchester Arena shouted for Deji during the pregfight ringwalks. But Paul’s first punch, a left hook, staggered Deji. Deji responded by bloodying Paul’s nose in the first round.

In the second and third rounds, Paul simply outboxed Deji, landing solid jabs and hitting Deji with body punches. Paul also showed good enough defense, keeping Deji, who threw many less punches than Paul, from landing any significant shots. In the fourth round, Paul punished Deji, landing all kinds of punches as Deji got trapped in the corner and on the ropes.

By the fifth round, Paul was landing shots at will, and Deji clearly had enough.

“He hit hard, but I stayed in there,” Deji said. “He said he was going to knock me out in the first round, and that never happened.”

After KSI beat Joe Weller in Feburary, he called out Logan Paul and Jake Paul in the aftermath. Although there were brief discussions that Jake Paul would fight KSI, it was eventually determined that the two younger brothers, Jake Paul and Deji, would fight instead.

That started a feud between Jake Paul and Deji that included plenty of trash-talking, diss tracks, and a meeting at a Los Angeles park that led to Deji originally begging off from matching up with Paul. Ultimately, though, Deji agreed to a fight, and the feud culminated on Saturday.

But as Paul mentioned, he’s had a tough year with the breakup of his Team 10 squad and various lawstuis.

“It wasn’t so much just boxing match,” said Paul, who unexpectedly called out hip-hop artist Chris Brown to fight. “It was putting my heart on the line to overcome a lot of things, that I could overcome adversity.”