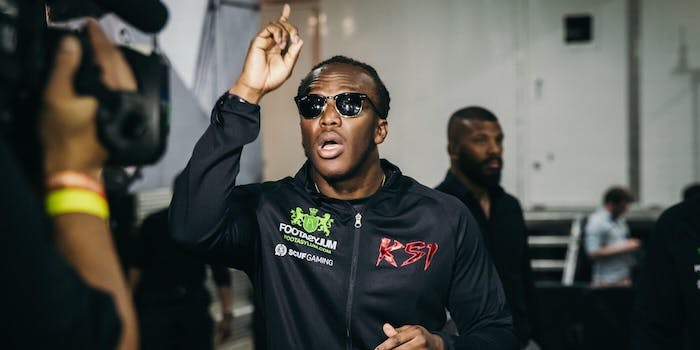 KSI is still a huge YouTube fan, but the streaming star wants so much more

After his split decision victory vs. Logan Paul in the rematch of their YouTube boxing extravaganza last month, KSI stayed in Los Angeles for a few extra weeks. Presumably, he was looking to find ways to expand the scope of his influence, looking to continue transitioning from YouTuber to a mainstream star who’d be recognized on the street instead of only on a laptop screen.

He might have been longing for his home in London, but there’s always more work to be done when you’re searching and climbing and rooting around for bigger and better opportunities.

KSI, whose real name is Olajide “JJ” Olatunji, couldn’t keep the exhaustion at bay, though. After all the training and the fight and the acclaim and the long trip across the Atlantic, he was goddamn tired.

It’s been a long two years for KSI. He knocked out Joe Weller in the first YouTube boxing match in February 2018. KSI—which stands for Knowledge, Strength, and Integrity—was always popular in the U.K., racking up about 17.5 million subscriptions before meeting Weller.

While he was known for gaming and for creating diss tracks with his YouTube group, the Sidemen, he was always a little too edgy. He made fun of Weller’s mental health issues and hurled gay and misogynistic slurs at him. He was blasted for sexually objectifying women in a video he made when he was 18. Like plenty of other YouTubers, KSI had to grow out of his immaturity in front of millions on YouTube.

But after his win vs. Weller, his worldwide stature grew. He called out American YouTube star Logan Paul for a boxing match—the first of which was fought in front of 20,000 people in Manchester Arena and more than a million people who paid $10 to stream it on YouTube. Millions of more subscribers watched KSI engage in a nasty family feud with his young brother Deji in the aftermath. Then, he got his rematch with Paul in Los Angeles in November and won a narrow decision.

No matter how exhausted KSI has been from his journey, he felt like he didn’t have a choice. He had to keep moving forward, he had to keep throwing punches. And he had to win.

“It was literally about the legacy. I won the fight. That’s it,” KSI said. “There was a lot riding on it. We had the shit talk between both to us, and one of us had to lose. That was Logan. Simple as that. It wasn’t about money. It wasn’t about fame. I already had money. I already had fame. Winning was for my legacy. That’s all I cared about. I wasn’t going to lose what I worked for all these years. It was very real. I don’t know how you can fake it. I can’t fake stuff, man.”

That seemed obvious in the postmatch interviews. Paul was conciliatory, telling KSI how much he respected him and how all the trash-talking between the two had been for show and to hype up the match. KSI’s body language told a different story. He clearly didn’t want to tell Paul that he respected him, and he showed that, perhaps more than anything, he was ready to be done with Paul.

At the age of 26, KSI is different now than he was a few years ago. He’s certainly more mature. He certainly has more fans. And he’s certainly looking to expand his global footprint. Winning big—literally and figuratively—in America was an important part of that process.

“There’s a huge audience in America,” KSI said. “Same with Asia and Africa. There are huge audiences there. I’m just being smart with it. In Europe, I’m at the top of the game. In the U.S., I’ve got lots to conquer. That’s why I’m venturing out there a lot more. I’m trying to grow my brand and be successful there as well, so I can be properly Mr. Worldwide.”

Much of that comes from his music. The day before the rematch, KSI released a new single called “Down Like That” that features Rick Ross and Lil Baby. When told about those plans a few days before they threw punches at each other, Paul expressed surprise to the Daily Dot that KSI would attempt that during fight week. “I don’t know about him,” Paul said. “I mean, I’m not worried about dropping a single and trying to get streaming hits on it.” But clearly, it worked. KSI won the fight and compelled 13 million people to watch the music video on YouTube.

His first EP, Keep Up, was released in 2016, and it reached No. 1 on the U.K. R&B Albums chart (it peaked at No. 19 on the Billboard R&B/Hip Hop chart in America). Last summer, he went on tour in the U.K.—much like Jake Paul did in the U.S. in 2018—and played his music for thousands of adoring fans.

Through it all, KSI has been adaptable on YouTube, and that’s kept him relevant even as former YouTube superstars have lost fandom and viewership or simply cut back on their vlogging time because of burnout.

KSI was a gamer when it was popular. He compiled prank videos when they were trending on YouTube. He did diss tracks, reaction videos, and music videos. He mostly followed the trends, and it paid off. But with YouTube boxing, he was the one setting the trend. He was the one making it vastly more visible just because he was involved.

“You can’t always do the same thing,” KSI said. “People will get bored. If you eat the same food every day, you’re going to get tired of it. You always have to change it up.

“For me, that’s how I am. I take a little trend and I make it way bigger than it was. Joe Weller, he had a little boxing thing, and I took it to a different level. The same with music. I’m constantly pushing the boundaries. I didn’t want to get pigeon-holed early in my career. That’s why I wasn’t afraid to try new things.”

With boxing, it worked. In the rematch, he was paid a $900,000 purse and convinced 12,000 people to watch it live from Staples Center in L.A. and plenty more on the DAZN streaming service. It led to millions of more pageviews and hundreds of thousands of more subscribers and plenty of mainstream recognition. He also has plans to continue boxing, especially if he can lure other celebrities into the ring for big paydays (fighting unknown schlubs would be dangerous to his boxing career, because KSI very well could lose and because he wouldn’t get paid enough to justify taking the risk. It would probably hurt his legacy).

While some YouTubers are stepping away—Jake Paul has been critical of the platform, and earlier this year, Logan Paul said being a YouTuber was “wack”—KSI continues to embrace his online home.

“YouTube is not wack,” KSI said. “That’s disgraceful that he said that. YouTube helped them so much. For them to say it’s wack, it’s terrible. YouTube is so important for me. You never shoot the hand that feeds you. … For me, YouTube is the hub. YouTube allowed me to do more things.”

And he’s not content with only traveling in one lane. He’s said in the past that he takes inspiration from Will Smith and Donald Glover because they “don’t just do one entertainment thing.” In fact, one of the biggest moments of his life came as a teenager in the nosebleed seats inside London’s O2 Arena when he watched Kanye West and Jay-Z put on a 38-song musical masterpiece.

“I was literally in the nosebleeds, and I thought to myself, ‘That’s going to be me one day,’” KSI said. “Everybody has different ways of getting to that point. But I’ve been working toward that moment ever since.”