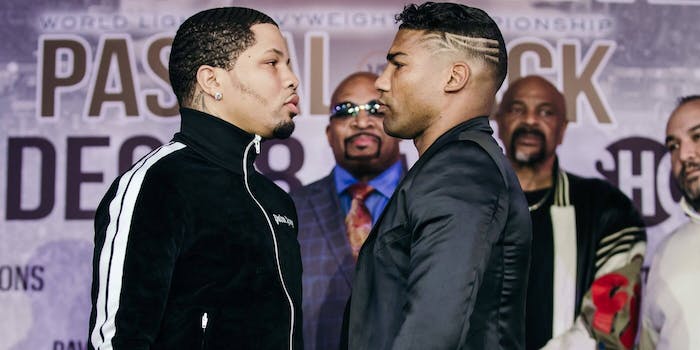 How to live stream Gervonta ‘Tank’ Davis vs. Yuriorkis Gamboa

"Tank" Davis is looking to roll right over Gamboa.

Gervonta “Tank” Davis is one of those young boxers who can captivate the entire sport. He’s undefeated with ridiculous punching power, and he can play the role of heel—just like his friends and mentors Floyd Mayweather Jr. and Adrien Broner—that will compel some part of the population to tune in to his appearances hoping that he’ll lose.

But more than anything, Davis is a true talent who is testing himself by moving up in weight to face Yuriorkis Gamboa in a matchup you can live stream on Showtime.

“I don’t think it’s an exaggeration to say that Gervonta is one of the top young stars in the sport,” Showtime executive Stephen Espinoza said during a recent teleconference. “He is numerically one of the top three draws in all of boxing for 2013. … When we described Gervonta as one of the young stars in boxing, this is not just hyperbole. It’s not salesmanship. It is actually a fact, and it is very important, what he’s doing here. There’s no young fighter doing what Gervonta is doing right now. There’s no other fighter in boxing doing what he’s doing.”

Gamboa, a former Olympian and world titlist, will have something to say about that, though.

Here’s all you need to know to watch Davis vs. Gamboa if you don’t have cable.

There are plenty of ways to live stream Showtime, and that includes  YouTube TV and DirecTV Now. Naturally, it’ll cost you a little extra per month to watch the premium cable channel. The good news, though, is that each service typically offers a one-week free trial. That means if you’ve never had a Showtime subscription before, you can watch Davis vs. Gamboa without paying a nickel. We’ve highlighted some of the best live streaming options below.

Aside from the Davis vs. Gamboa main event, Showtime also will show Jean Pascal vs. Badou Jack in the co-feature bout.

Unlike most of the streaming services, Showtime, every once in a while, gives you an extended free trial of 30 days instead of the standard seven. Luckily, this is one of those times. For now, you get a free 30-day trial with the app, and after that, it costs $10.99 per month (don’t worry, you can cancel any time). If you want to stream Davis vs. Gamboa directly through Showtime, this is the way to do it.

The best thing about Hulu is that you get the option of watching all the TV shows and movies the service offers while also having the ability to stream live TV. It’s a solid 1-2 punch for boxing fans (even if the price for the Hulu Live recently rose by $10 per month). For Showtime, viewers will have to pay a $10.99 monthly charge after a free seven-day trial. Here’s the complete list of Hulu Live TV channels.

If you’re a big sports fan, FuboTV might be the best streaming service option for you. Another plus for FuboTV is that the streaming service also showcases some of the best local TV coverage of any of its competitors. With Showtime on FuboTV, it’s also a great place to watch movies. Here are the complete FuboTV channels list and our FuboTV review.

If you haven’t yet had a Showtime subscription on Sling TV, you’ll first start with a seven-day free trial. After that trial ends, it’ll cost you an additional $10 monthly fee. One of the best perks offered by Sling is that you can select channel packages in an à la carte fashion to pay for the channels you want the most. That means you can pay either $30 or $45 per month depending on how much content you want to watch. If you sign up now, however, you’ll actually get 40% off your first month, bringing your first bill down to just $15 or $25. Here’s a complete guide to Sling TV channels and our Sling TV review.

If you’d prefer a one-stop shop for all your streaming needs, Amazon is exactly the service you need. Plus, after a seven-day free trial, you can add Showtime for $10.99 per month from one centralized media center. This is about as easy as it gets to live stream Showtime and to watch Davis vs. Gamboa.

“Tank” Davis vs. Gamboa live stream: Why it matters

Davis is moving to the lightweight division of 135 pounds after spending his last six fights as a 130-pound junior lightweight. Davis has struggled with his weight for some of his career—he was once stripped of a world title because he didn’t make weight—so it’s assumed that he should be more comfortable in a heavier weight class.

Of course, he’ll now have to fight bigger boxers, and it’ll be interesting to see if Davis (22-0, 21 knockouts) can still have overly effective power against opponents that will weigh more and theoretically have a better chance of taking his shots.

But Gamboa (30-2, 18 KOs) has been knocked down at least a dozen times in his career. So, his chin is awfully suspect anyway.

“My skill set suits a fighter like Gamboa,” Davis told reporters this week. “My mindset right now is just so focused. I know exactly what I have to do in there on Saturday night. I’m a more mature and focused fighter. … Gamboa’s a great fighter. The experience in the ring, I have it too. So it’s going to make for an exciting matchup and one the fans won’t want to miss. I’m must-see TV.”

But Gamboa might have some advantages. Though he’s 38 years old, Gamboa is a former Olympian from Cuba, and he unified two world titles as a featherweight. He even gave Terence Crawford—considered by some to be the best pound for pound fighter in the world—some problems early in their 2014 fight.

“My training has been excellent … We’ve done a great deal with increasing my workload, to increase the capacity of my workload on fight night,” Gamboa said. “Also learning a lot of new techniques and a lot of game planning has gone into this camp. I’ve learned to be a lot more cerebral because at the end of the day, the cerebral part of the fight is what’s going to take me to victory.”

As of this writing, Gamboa is a significant 13/1 underdog. But all he needs is a chance.

“I think there’s going to be good exchanges here and there throughout the rounds,” Gamboa said. “But at the same time, I think we both carry a significant amount of intelligence into the ring, and I don’t expect anything less from Tank, and obviously not from myself.