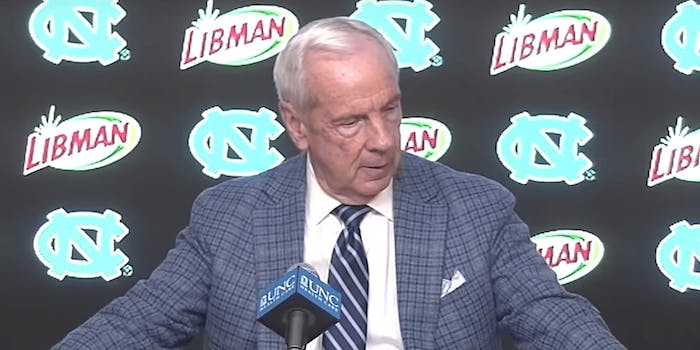 How to stream North Carolina at Louisville live

You might want to check out North Carolina now, as they might not make the NCAA tournament.

Here’s everything you need to know to stream North Carolina at Louisville live on Saturday.

Roy Williams and the North Carolina Tar Heels try to break a six-game losing streak on Saturday, when they travel to take on ACC leaders Louisville. Few would have expected this before the season, but this is a matchup between the conference’s current best and worst-placed teams, and it’s a wholly unfamiliar position for UNC.

The Cardinals got back to their winning ways Wednesday night in a 90-66 win over Syracuse, following back-to-back upsets to unranked Virginia and Georgia Tech the week before. Louisville has one more big matchup against Florida State before ACC tournament play begins, and needs to avoid stumbling against a depleted UNC to keep its hopes of a top-2 seed in the NCAA tourney alive.

North Carolina (last five ACC games: LLLLL) would have no complaints if this season were wiped from the history books, considering the Tar Heels couldn’t even beat Duke when Coach K’s team had an off night. A rematch in Durham in two weeks is UNC’s last hope of salvaging some sort of memory from this season, but even in that scenario, they would be playing spoiler to the school they should be on par with. Tar Heels’ fans are holding out hope that an upset over Louisville could help get this team rolling heading into the ACC tournament, which Coach Williams will need to win to make a tenth consecutive NCAA tournament.

Louisville (last five ACC games: WLLWW) was a possible No. 1 seed dark horse earlier in February, before those plans were derailed by two losses to middling ACC schools. The Cardinals still have the opportunity to improve their resume in Tallahassee, plus the potential for big games to win in the upcoming conference tourney. Don’t think they will be overlooking UNC, though, as the usual powerhouse has been taking revenge blows from everyone, to get even for nearly two decades of ACC dominance.