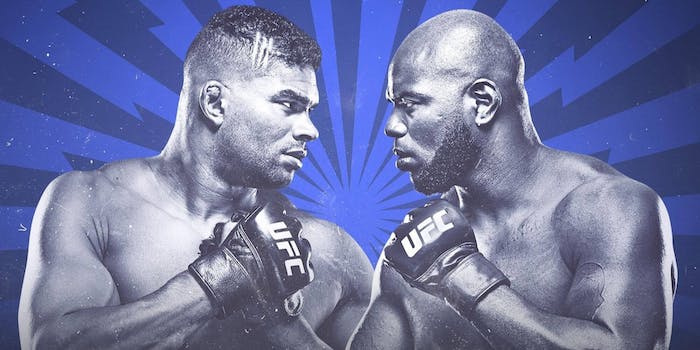 How to stream Alistair Overeem vs. Jairzinho Rozenstruik

In a perfect world, the Alistair Overeem vs. Jairzinho Rozenstruik match would be pure pleasure for UFC fans.

In a perfect world, Saturday night’s main event between Alistair Overeem (45-17) and Jairzinho Rozenstruik (9-0) would be pure pleasure for UFC fans, a heavyweight fight full of drama and mythic resonance and title implications featuring two men plucked straight out of central casting.

On one side you have Overeem, the impossibly huge MMA legend with 63 fights and numerous championship belts to his name, fighting to stay relevant in a sport to which he’s given 20 years of his life, and on the other, you have Rozenstruik, the young-up-and-comer from a tiny country with dynamite in his hands who wants what Overeem has and who’s been mauling opponents to get it. It’s a real struggle between experience and youth, between the present and the future of MMA. Pure pleasure. Unfortunately, we don’t live in a perfect world. We don’t even live in a decent one.

Originally Rozenstruik wasn’t supposed to be on the card, which you can live stream on ESPN. On Nov. 2, he fought and beat Andrei Arlovski at Madison Square Garden, and under normal circumstances, he’d be spending the next few months at home, resting his body after a grueling 12-week training camp. But on the same day as that fight in New York City, Overeem’s original opponent for this UFC on ESPN main event, Walt Harris, announced that he was pulling out because his stepdaughter Aniah Blanchard had gone missing in Alabama. Since then, police have determined that Blanchard was abducted and murdered, a tragedy that’s put the concerns of cage-fighting into perspective and hung a pall over the MMA community.

When the UFC called Rozenstruik to ask if he’d be willing to fill in for Harris on short notice, he wisely jumped at the opportunity despite the circumstances, knowing a win over one of the biggest names in the sport would help make his reputation.

Not that his reputation needs much help. The 31-year-old Surinamese kickboxer has only fought in the UFC three times but he’s proven himself to be a puncher of rare gifts. He knocked out the legendary Arlovski in just 29 seconds. Five months earlier, he knocked out Allen Crowder in just nine seconds—making the Arlovski fight feel like a David Lean movie by comparison. With two-thirds of his UFC career able to fit into a single gif, Rozenstruik has been floating through the heavyweight division on the magic in his hands. That kind of casual, natural, God-given knockout power is a rare thing, even among heavyweight fighters. Rozenstruik’s fellow UFC contender Francis Ngannou has it. So does boxing champion Deontay Wilder. Those three may be the entire list.

Which isn’t great news for Overeem. Despite being a giant of MMA, the Dutch kickboxer is also, at age 39, an old man, and his chin has shown wear. Since coming to the UFC in 2013, he’s been knocked out six times, including a one-punch comic-book uppercut from Ngannou that would have killed most men. So at this point in his career, Overeem’s ideal opponent is probably not another preternaturally strong knockout artist looking to make his name by beating up a legend. But real life has changed everyone’s plans, so either Rozenstruik’s coming-out party or the next glorious chapter in Overeem’s already illustrious career—whichever one unfolds—will unfold under a cloud.

How to watch Alistair Overeem vs. Jairzinho Rozenstruik

Hulu offers both ESPN and ESPN2, along with a strong package of other live TV channels. You’ll also get access to thousands of on-demand TV shows and movies, plus Hulu original series like The Handmaid’s Tale. Hulu really is a nice way to watch live streams and take in content that has already aired before. It’s a pretty fantastic deal. (Here’s the complete list of Hulu Live TV channels.)

The cheapest way to watch ESPN online is through the Sling TV streaming service. If you buy the Sling Orange package, it only costs $25 per month, and that includes ESPN, ESPN2, and ESPN3, plus a bunch of other great channels. But if you’re a huge sports fan, you’ll probably want the Sling Orange + Blue package for $40 a month. Either way, you’ll start with a free seven-day trial. And for now, Sling is offering packages at 40% off, meaning you’ll pay $15 for Sling Orange and $25 for Orange + Blue (Here’s a complete guide to Sling TV channels and our Sling TV review.)

YouTube TV puts all of your favorite channels in one place and lets you add up to six accounts for every subscription, all of which come with free cloud DVR. If you’re a sports fan, YouTube TV is worth considering for specialty options like NBA TV and MLB Network. You can also stream all of the biggest UFC contests. Overall, YouTube TV strikes a perfect balance between sports (MLB Network, NBA TV, a whole bunch of ESPN channels), news (CNN, MSNBC, BBC World News), and entertainment (AMC, HGTV, TBS). (You can find the full list of YouTube TV channels here.)