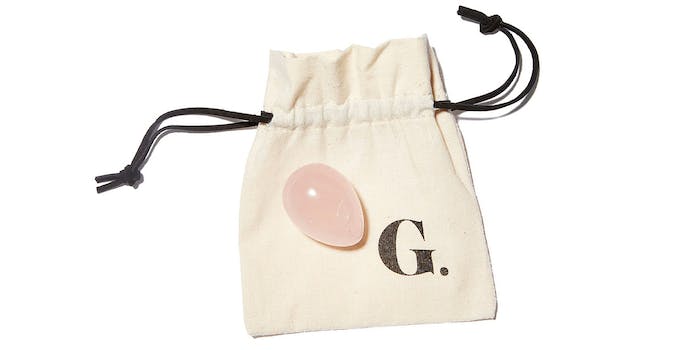 The lawsuit focused on the most well-known product from Goop, Jade and Rose Quartz Eggs, which are still available for purchase. A year ago, the internet exploded over these eggs sold on the site, which the purchaser is supposed to insert into their vagina for various medical/spiritual reasons. Previously, the product description for the Rose Quartz Egg said regular use “increases chi, orgasms, vaginal muscle tone, hormonal balance, and feminine energy in general.”

Experts denounced the claims and also advised that using these eggs could even be unhealthy. “I would like to point out that jade is porous which could allow bacteria to get inside,” wrote gynecologist Dr. Jen Gunter. “It could be a risk factor for bacterial vaginosis or even the potentially deadly toxic shock syndrome.”

The lawsuit brought by Santa Clara County District Attorney’s Office and nine other prosecutors claimed Goop was selling products “whose advertised medical claims were not supported by competent and reliable science.” Goop denied this, but said it wanted to settle the case “quickly and amicably.” Besides the $145,000 in civil penalties, Goop will also be offering refunds and will no longer make medical claims about their products. The Rose Quartz Egg product description now makes no measurable claims, but says it is “associated with positive energy and love.”

The lawsuit also named an essential oil blend, the Inner Judge Flower Essence Blend, which the website previously claimed could prevent depression. Even though it can’t make the claims it used to, Goop is continuing to sell bizarre “wellness” products.

In other news, if you wanted Goop's $27 Chill Child Kid Calming Mist or the $27 Psychic Vampire Repellent, too bad for you, because they are sold out pic.twitter.com/YHn7HDAgME

The lawsuit has sparked discourse about alternative medicine and “wellness” products in general. Some see wellness companies like Goop as a result of misogyny in traditional medicine, in which women’s health concerns are sometimes dismissed or ignored. In turn, women have had to seek out alternatives on their own—and that’s where Goop swept in.

I’ve been saying this for years now: Goop is a direct reaction to the well-documented mistreatment of women by a patriarchy-dominated medical establishment. If you want to understand the power/attraction of Goop, you need to know the history of medicine. https://t.co/zmwRdTkY2H

For many, the punishment is simply too small for the crime. $145,000 is a drop in the bucket compared to the over $250 million that Goop is reportedly worth. In addition, while the company may not be able to make health claims about its products anymore, others can and Goop can still profit off those “expert” claims and reviews by selling the eggs, oils, and powders with vague descriptions.