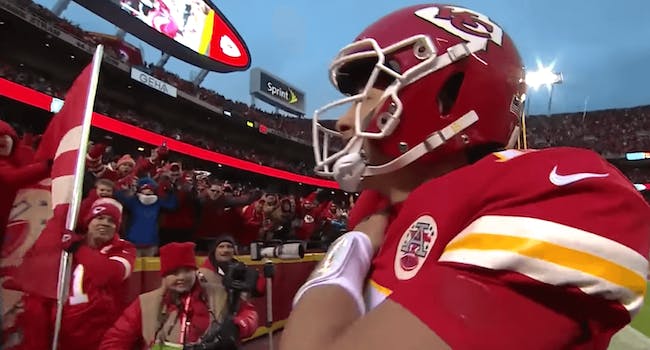 AFC Championship: How to stream Chiefs vs. Titans live

A team of destiny and an underdog clash with a Super Bowl trip on the line.

It’s the sure thing vs. the long shot this weekend in the AFC Championship. The heir apparent Kansas City Chiefs, who came so close to last year’s Super Bowl, face off against a Tennessee Titans team that came out of nowhere to make the conference title game.

With Tom Brady’s Patriots taking a long-awaited step back, many speculate that Patrick Mahomes and the Chiefs will become the class of the AFC if the New England dynasty is really coming to an end.

The Andy Reid-coached Kansas City team has given us no reason to believe that they won’t go to the Super Bowl. Even considering the weeks when Mahomes was sidelined or playing injured, the Chiefs improved on defense and became one of the league’s most complete teams. Their 51-point performance last week was an exclamation point on a stellar season.

Tthe emergence of Ryan Tannehill in Tennessee and the stunning rushing season from Derrick Henry has unexpectedly helped the Titans become the other most complete squad in the conference. No one expected it at the beginning of the season, but the Titans have become formidable.

Though the narratives surrounding these teams are different, they actually ended the season in similar positions. Tennessee was 16th in Defensive DVOA and sixth on offense. KC was only a notch better in each category: Third in offense and 14th in defense.

These teams look very different: the Titans are a tough run-first team and the Chiefs are a pass-happy points machine. But both teams have proven they know how to win.

This game is actually a closer matchup than it might appear. While the Chiefs have the edge on offense overall and have the better pass defense, Kansas City lacks a running back with the dynamic power of Derrick Henry. The Titans also boast tough line play to back up their running game.

Here’s everything you need to know to stream Chiefs vs. Titans in the AFC Championship.

Texans vs. Chiefs live stream: How to watch the NFL Playoffs online

This game is on CBS, and will be available via the following streaming services.

Hulu with Live TV includes sports programming among its offerings, including ESPN and FS1, and as a subscriber to the service, you’ll get free access to Hulu’s sizable on-demand library. (Check out the full list of Hulu Live TV channels.

These two teams have very different strengths. Against the Ravens, the Titans only managed 88 passing yards and let Derrick Henry carry them to victory. Henry ran for nearly 200 yards as Tennessee snuffed out Baltimore’s season.

In the Chiefs’ victory over the Texans, Patrick Mahomes threw for 321 yards and five touchdowns to lead the charge back from 24-0 down. And Kansas City’s leading rusher last weekend? Also Patrick Mahomes.

Most analysts will have Kansas City beating the Titans, and that’s where we land as well. But, with two such different teams facing off, it’s not hard to imagine a variety of outcomes in this game.

In addition to Herny’s rushing, the Titans do some other things well. They tend not to turn the ball over. They have strong line play. Tennessee is fourth in the league in punting.

That being said, Kansas City has the advantage at the two more important roles in football: Quarterback and coach. We will pick the Chiefs to win here and go onto win it all, but it wouldn’t shock us if Derrick Henry spoils their party and earns the Titans a Cinderella Super Bowl appearance.