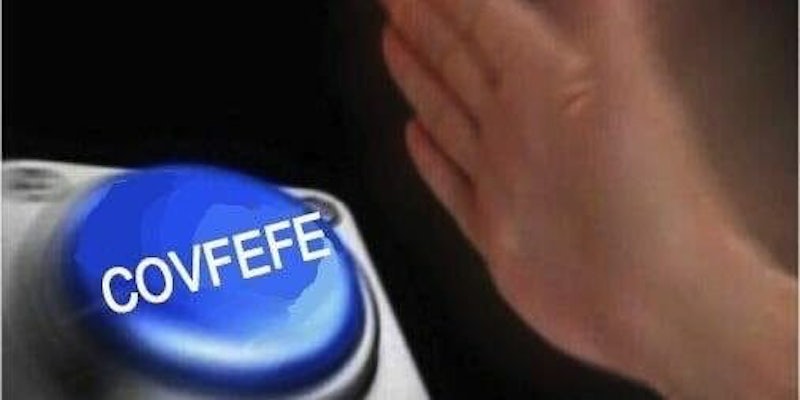 The meme internet was ready for this moment.

More than ever before, the meme culture of 2017 is a culture of remixing and recombining memes to create new #content. The meme-industrial complex that includes 4chan, subreddits like r/dankmemes, and derivative sites like iFunny is set up to assimilate any memeworthy news within hours, rapidly grafting it onto the successful memes of the past. On Tuesday night, it went to work on Donald Trump’s now-infamous “covfefe” Twitter typo.

“Covfefe,” as a nonsense word, is trivially easy to slot into any meme template you can think of, and that’s exactly what the internet did.

The Trump executive order meme is an obvious one:

But the trend spread to a whole range of recent hits, like “eyes on drugs“:

And the blue “nut button“:

And the Whomst/”expanding brain” meme:

Mocking Spongebob, the biggest meme of May, was an obvious choice:

But no meme, no matter how minor, was safe from the rapidly stretching tendrils of covfefe.

Several factors combined to speed the spread of covfefe across the 2017 meme landscape. As a word that means nothing, it can replace the punchline of any meme, no context required. The work involved is almost zero: Just pick a meme and covfefe it.

Gordon Ramsay could locate the covfefe. Salt Bae could sprinkle it.

"And just before you serve it, you hit it with a dash of #Covfefe" pic.twitter.com/fm9CAF4Iyz

And because memes have become more template-based over time, dank #content creators were supremely prepared for a moment like this. The memes of 2017 tend to be multi-panel images with specific real-estate allocated for a punchline—think of Drake memes or the exploding brain, for example.

When Trump fell asleep with his phone in hand (or whatever happened to bring us “covfefe”) most of the work was already done. All the internet had to do was plug and play.