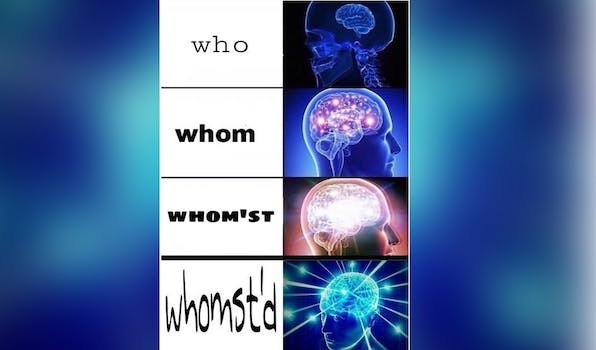 ‘Whomst’ meme will make you a genius

Many incorrectly believe that “whom” is a form of “who” that pretentious people use when they want to sound smart. But if that were the case, then “whomst” would be even smarter, and “whomst’d” would be for absolute geniuses only. These two made-up words are sweeping the meme world this week.

Know Your Meme traces the “whomst” boom back to this Instagram post by b3pis, showing a guy getting happier as the form of “who” grows increasingly fancy:

Whomst has two primary meme-ological forebears. One is the “increasingly verbose” trope, where explanations become wordier as the meme goes on. This is also related to other jokey internet attempts to prove one’s intelligence, like “me, an intellectual”:

The other is the approval/disapproval matrix represented by Drake smiling versus pushing something away, or the Persuadable Bouncer rejecting one thing and letting another in.

Whomst has its own version of this grid, showing a brain in three (or four) states of increasing arousal. 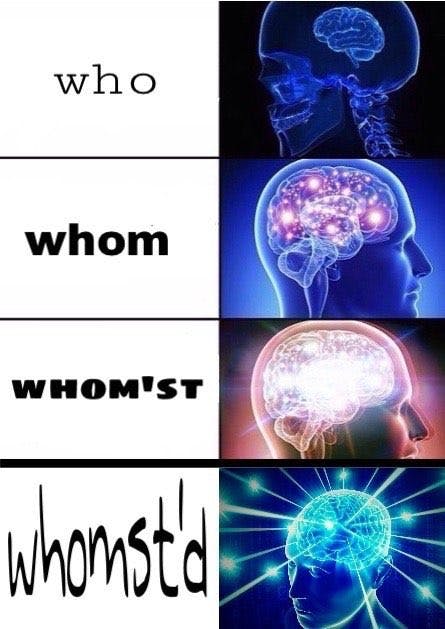 Here’s an example of the meme in action: The implication is that smarter and more sophisticated people listen to better rappers. Even though J. Cole went platinum with no features, he’s getting the short end of the stick in this meme.

Let’s try another one: 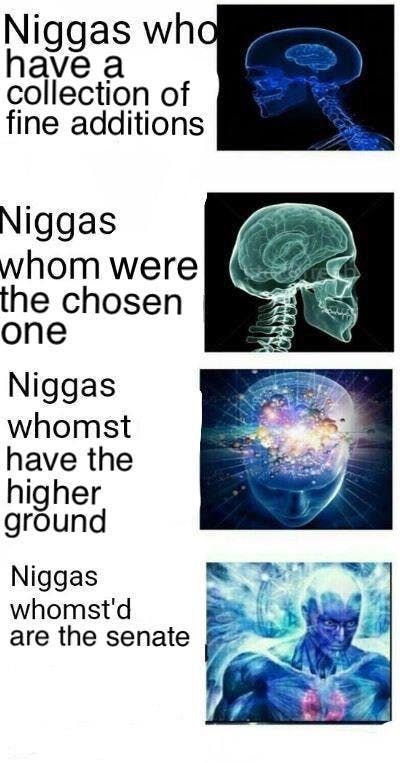 This is a reference to the many, many, Revenge of the Sith memes that have been flooding Reddit this month: It ranks Chancellor Palpatine above Obi Wan, Anakin, and General Grievous, referring to them by their respective catchphrases. And here’s the election 2016 version: 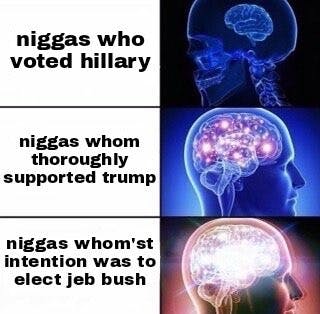 The “whomst” meme is new enough that it doesn’t have to be any good to get a laugh. As some have observed, the novelty alone is enough to make it funny: 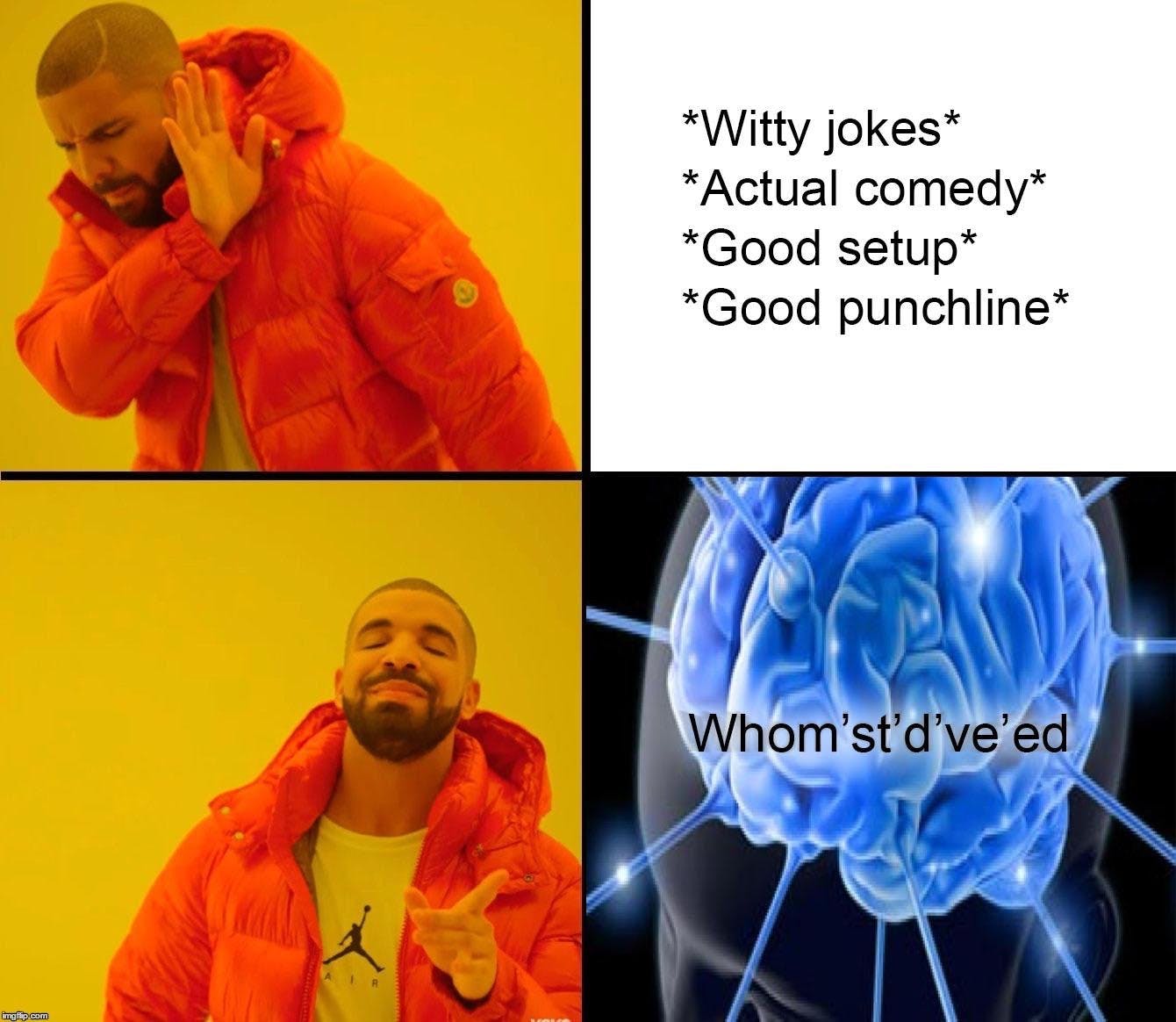 “Whomst” also doesn’t need those brain images to function. It’s been around on Tumblr for some time as a text-only meme. An anonymous person sends a Tumblr ask wondering, “Whomst?” and the response comes back … “Y’AIN’T’D’VE.”

Yes, “y’aint” and its various forms are also a grammar meme that’s picking up steam this month.

According to Know Your Meme, “yaint” started on Tumblr in December with this image of an arm-wrestling Superman. In the comic, the formulation “you all are not” is defeated by the superior “YAINT*.” 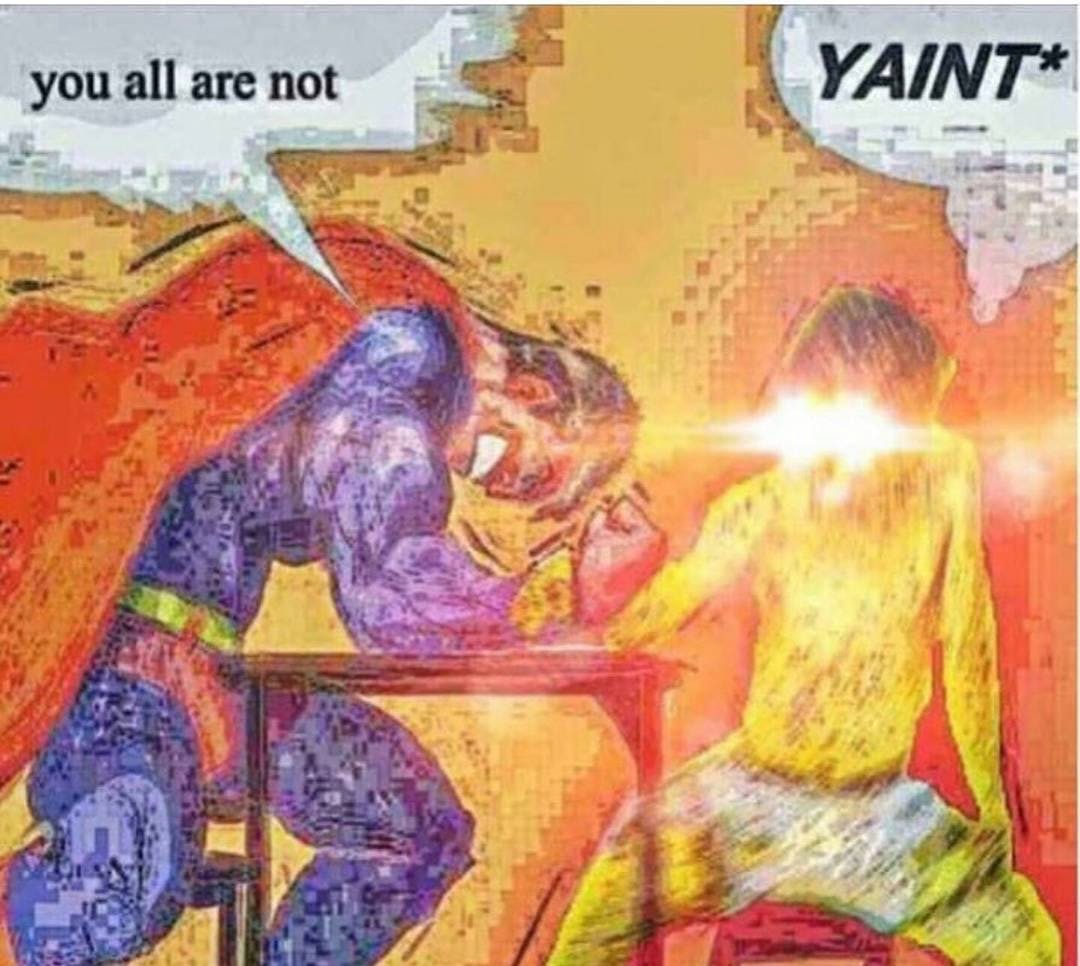 Similar images are now everywhere on Tumblr, with fans of various entertainment franchises casting their favorite characters in the dominant “YAINT*” role. Fandoms as diverse as My Little Pony, Overwatch, and JoJo’s Bizarre Adventure are represented: 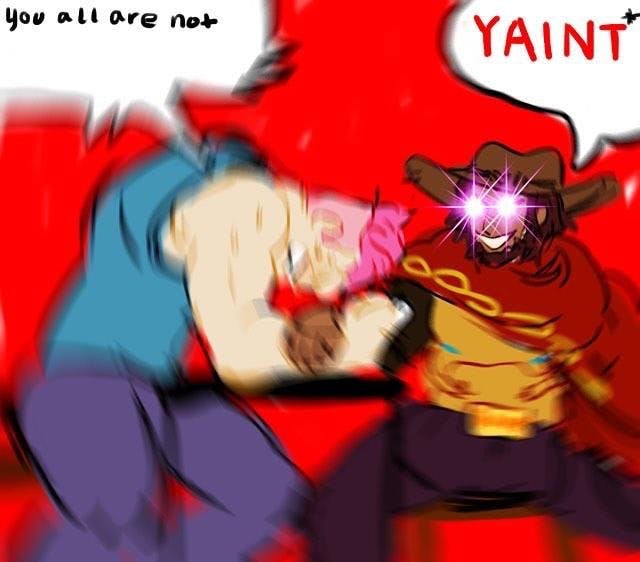 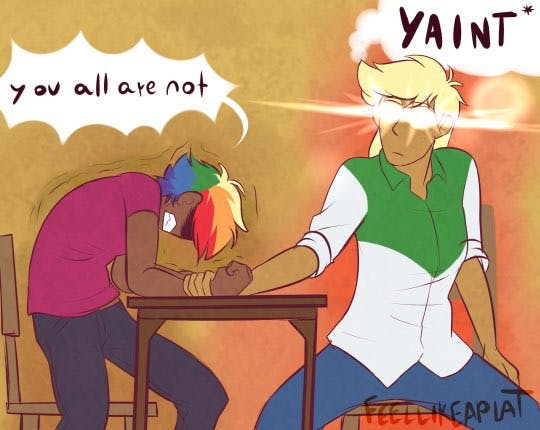 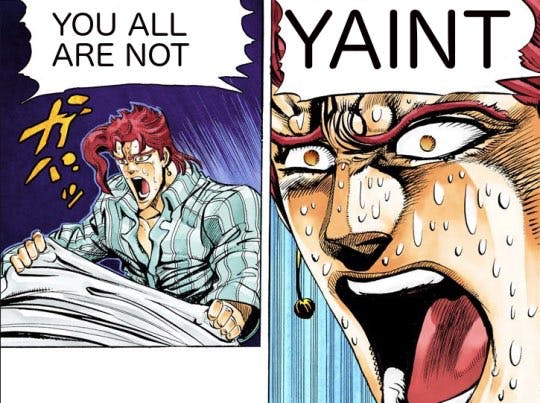 Tumblr’s YAINT* takes a very different direction than the “whomst” of Reddit and Instagram, but they do have one thing in common: glowing laser eyes.

If you had to point to a big trend in the good memes of early 2017, that would be it. Perhaps it started with Gordon Ramsay‘s glowing eyes in the Lamb Sauce Located meme, or perhaps it was a case of independent discovery. Either way, glowing eyes are in this year.