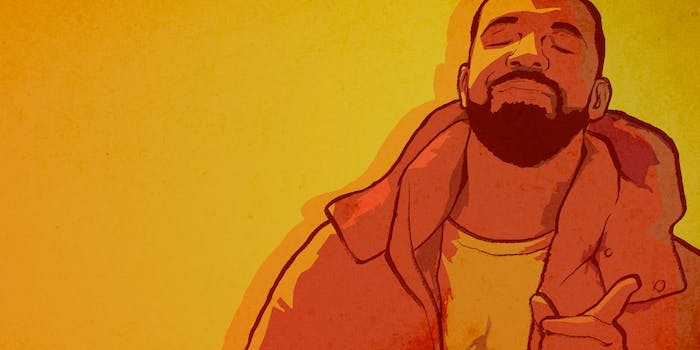 The complete encyclopedia of Drake memes

Drake is our greatest living meme.

Aubrey Drake Graham may no longer be the Best Rapper Alive, but there’s no doubt he’s the most meme-able artist in the game.

Ever since he broke out with 2010’s Thank Me Later, people have been making fun of Drake for being soft, emotional, and Canadian. His career as a teen soap star on Degrassi only added more fuel to the fire.

The tenor of Drake memes changed as li’l Aubrey grew up, bulked up, and transformed into a sexy, bearded god walking this fortunate Earth. The volume stayed the same, though. It even increased with the release of “Hotline Bling,” one of the most exploitable music videos ever. It got so bad in May of 2016 that Drake devoted a Saturday Night Live sketch to Drake memes. Shit.

What follows is a history and taxonomy of online #content around Drake, perhaps our greatest living celebrity meme. Starting from the bottom, of course.

Drake’s Jewish heritage is one of the most fascinating things about him, and he’s happy to both honor and make light of it. This GIF of Baby Drake hitting that Bar Mitzvah dance was part of his video for “HYFR” with Lil Wayne, so he kind of brought it on himself.  This is only the tip of the iceberg in terms of digging back into Drake’s dorky, earnest past, though.

Variations on the caption “they say they miss the old Drake, girl don’t tempt me,” a line from Drake’s “Headlines,” are especially popular. A lot of rappers use “the old me” to refer to the gangsta lives they led before making it in the music business. Drake can try, but the old him was kind of a dork. 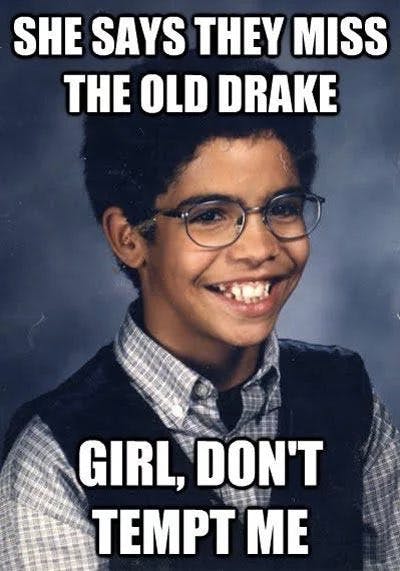 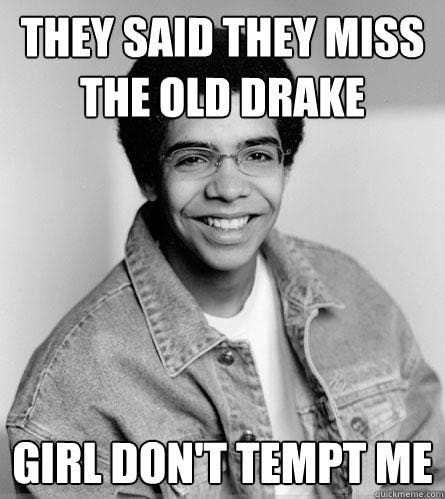 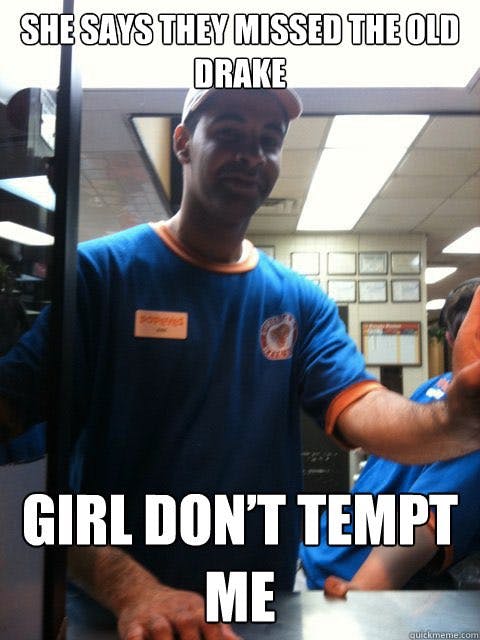 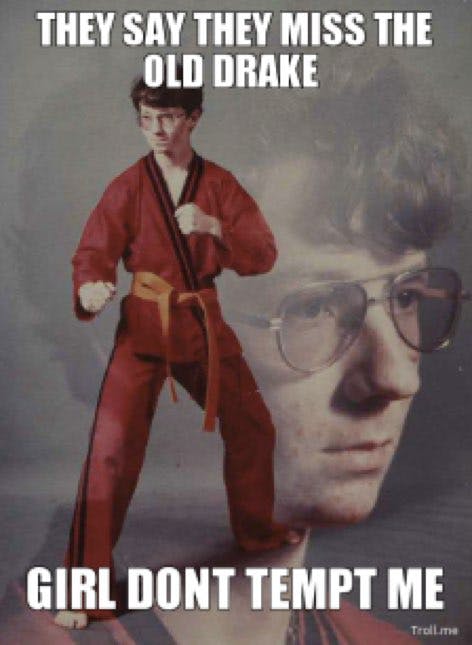 Drake also gets clowned over his character in Degrassi,  Jimmy Brooks, who was a high school basketball star before getting shot by a classmate and paralyzed. Drake was self-aware about how his crossover from teen soaps to hip-hop might come off, rapping on his early Comeback Season mixtape, “Damn, who’s Drake? Where’s Wheelchair Jimmy at?”

That didn’t stop anyone from mocking Drake’s Degrassi years, though. In his hometown of Toronto, people started sticking his head on various wheelchair signs. 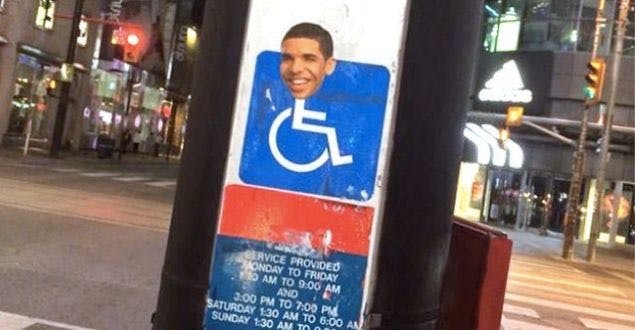 But “Wheelchair Drake” typically appeared in the context of that most outdated of meme forms, the image macro with top and bottom text: 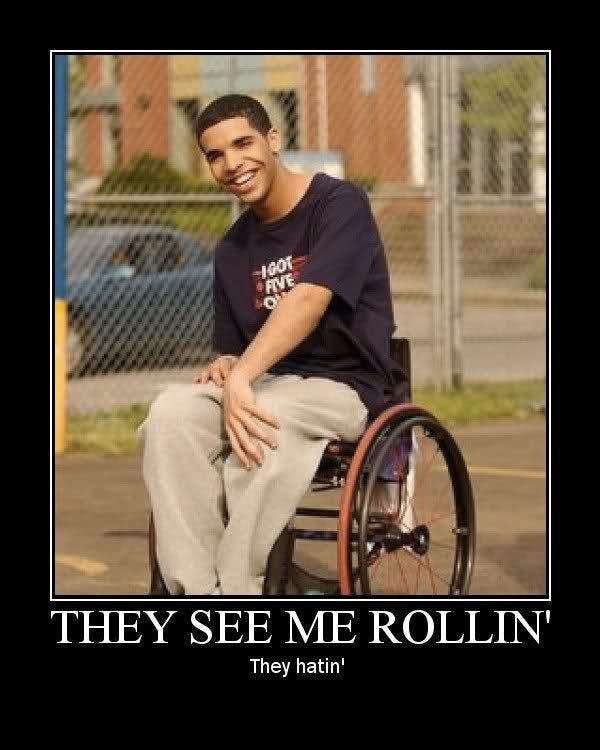 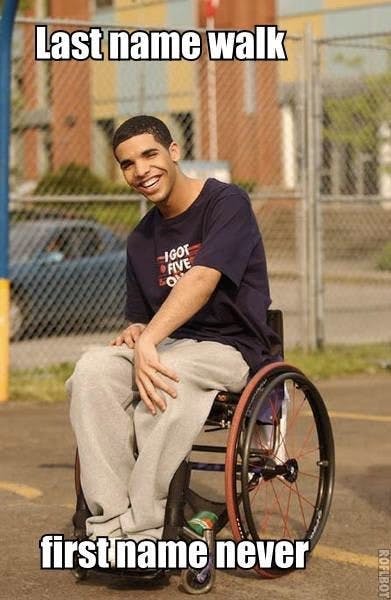 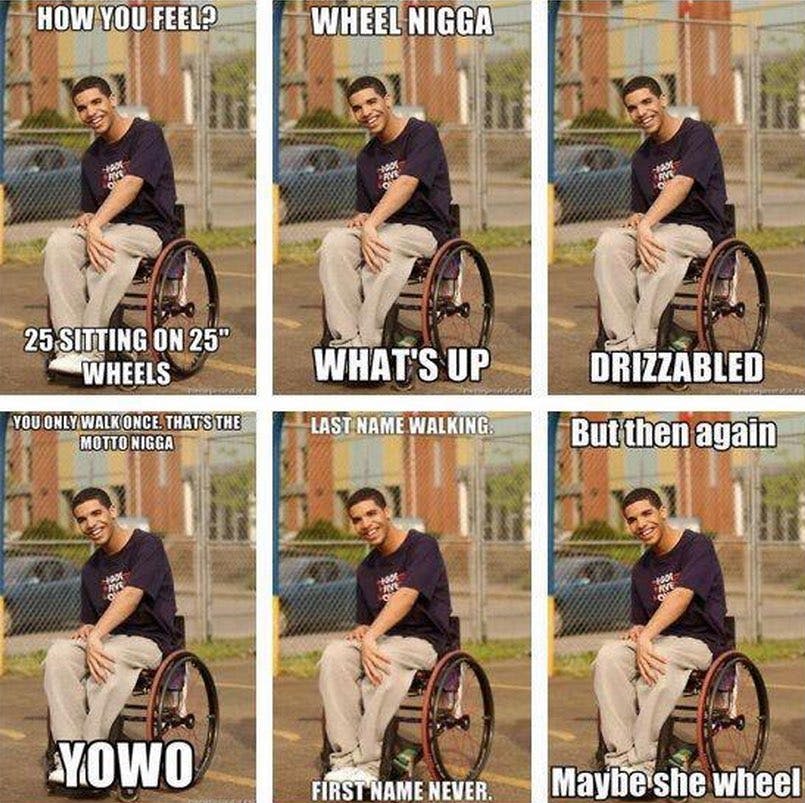 A post on Genius (formerly Rap Genius) asked “Are these Drake wheelchair pics insensitive?” The answer is obviously “hell yeah.” But they were also blowing up online in 2012, so consider them a historical document of things people used to think were cool and edgy to share.

Drake presents himself as a sensitive, brooding man who’s strong enough to cry, which has earned him the derogatory label “softest in the game”: 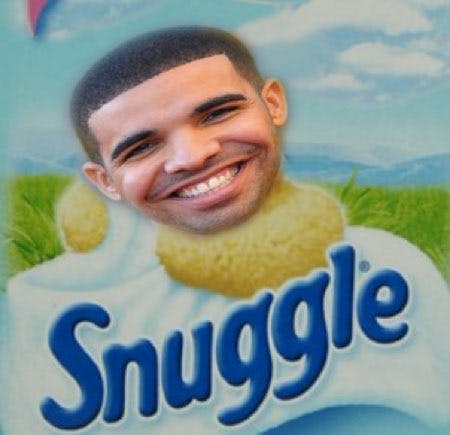 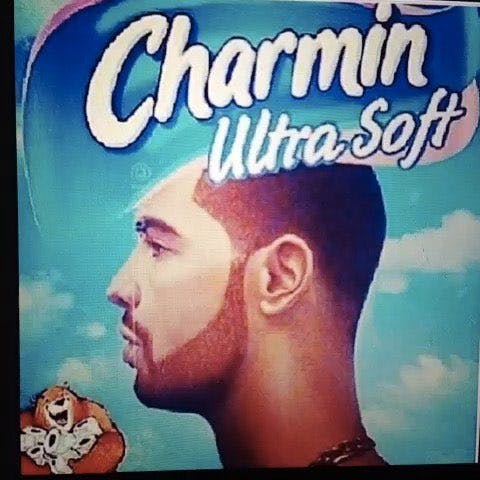 But just what type of dude is Drake, very specifically? Well, Drake the type to do all kinds of “soft” and “wack” and “feminine” things, as the “Drake the Type” meme revealed circa 2013:

Drake is the type of dude that wraps a towel around his head after taking a shower. Lol

Drake is the type of guy who’d dance with a chick at the club then text her… “So what are we?”

Drake the type of guy to get slapped by his girl and say “I deserved that”.

Drake the type of nigga who picks up a bruised apple in the grocery store and whisper “who did this to you…?”

Drake the type of guy that would get nudes from a girl then photoshop clothes back on her body and send it back!

Drake adjusts his bow tie in the mirror before raising a glass of champagne to his reflection. “Happy anniversary, Drake,” he whispers.

The snow begins to fall as Drake peers longingly through a coffee shop window. He catches his reflection and doesn’t even recognize himself.

Drake runs a scalding hot bath. A lavender bath bomb. A scented candle. He hugs his knees and dreams of summer until the water goes cold.

Using a quill, Drake writes “You could do better” onto a scrap of parchment. He puts it into a glass bottle, and tosses it out to sea.

The trope of mocking Drake by feminizing him took off again during the NBA playoffs and NCAA men’s basketball tournament in 2014, where Drake’s support of various NBA players got him labeled a “basketball girlfriend” or “groupie.” 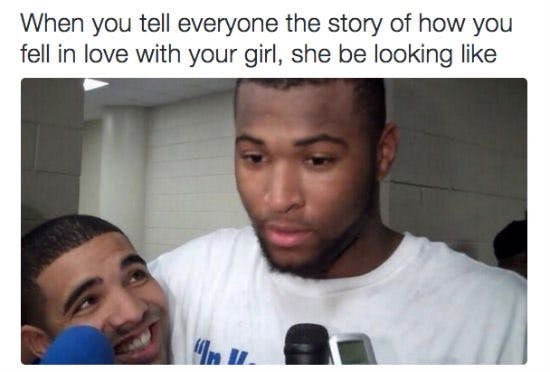 Even GQ posted a photo series proving that “Drake’s favorite thing in the world is hugging NBA players,” cementing the rapper’s status as the missing cast member of Basketball Wives.

Where to start with the iconic “Hotline Bling” video, which had Drake dancing like a dweeb inside colorful James Turrell-inspired lightboxes? One early meme replaced “Hotline Bling” with other very awkward songs, sometimes filed under the hashtag #drakealwaysonbeat:

The hotline is filled with secrets pic.twitter.com/5zS0WZhGCG

Freeze-framing the faces Drizzy made in the video was another comedy goldmine. When you don’t like something, but there’s an alternative you like better, Drake is there for you: 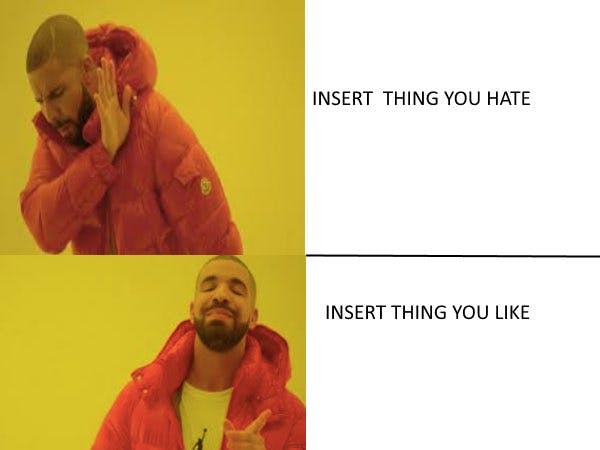 And a bunch of other stills from the video also turned out to be memeworthy. A few examples: 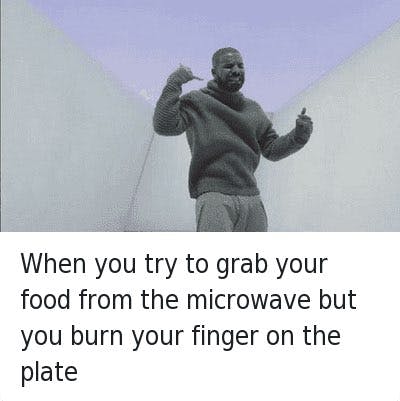 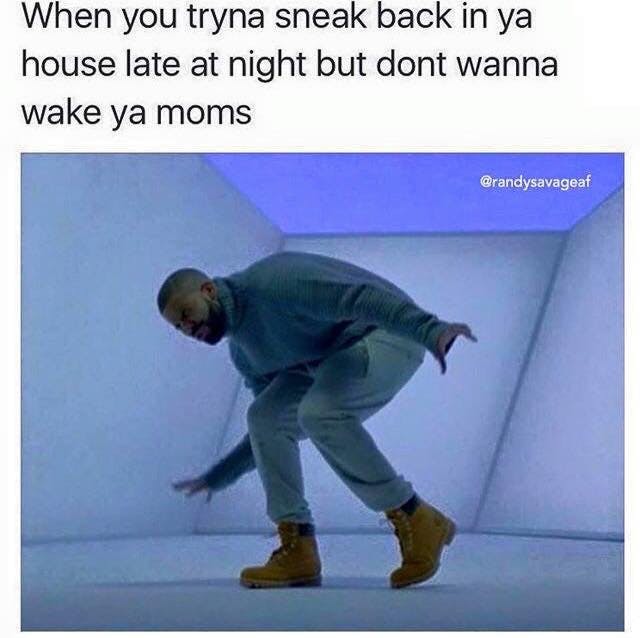 Drake has moved on from “Hotline Bling,” but it’s a gift to the internet that keeps on giving.

Between the release of the “Hotline Bling” single and the Views album, Drake took a little time out to beef with Nicki Minaj’s boyfriend, rapper Meek Mill.

Drake’s diss track “Back to Back,” his second Meek diss in one week, was widely considered a victory, and Meek’s humiliation became a meme of its own.

Meek’s momma said he movin’ with his auntie and uncle in Bel-Air pic.twitter.com/PT4zImcezN 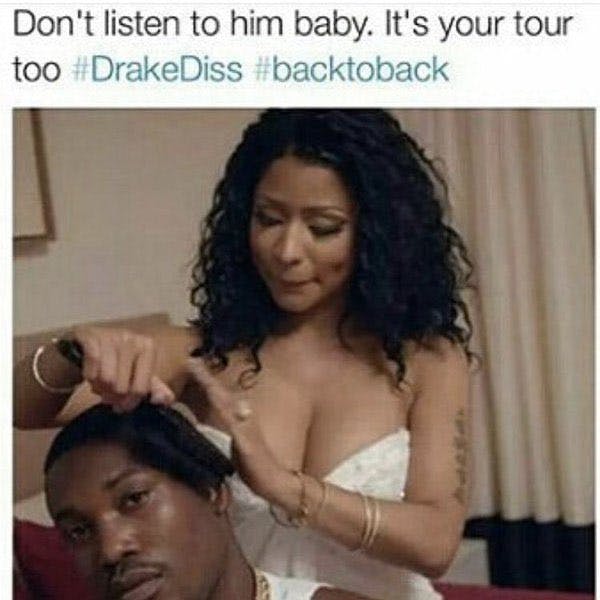 The meme war on Meek Mill was so funny and so savage that Drake projected a selection of the memes on stage when he performed “Back to Back” at OVOfest 2015 in Toronto, while the crowd chanted “Fuck Meek Mill.”

By late 2015, Drake was looking rather brawny, which further solidified a slow-burning meme about the rapper being an honorary Dominican (and possibly a club bouncer). But see for yourself before deciding:

When the long-awaited Views finally dropped, to a lukewarm critical reception, the first thing the internet jumped on was the album cover. It features Drake atop Toronto’s tallest structure, the CN Tower, and soon tiny Drake was sitting everywhere.

To the city I love and the people in it…Thank you for everything #VIEWS pic.twitter.com/HEXHNwrWwd

.@Drake I see sad keanu up there with u fam #VIEWS pic.twitter.com/vNrPflSlhW

As of late August 2016, Drake was on tour for Views. He seems to be giving it his all, and of course people are mocking him for it: I CHIME IN WITH A “HAVEN’T YOU PEOPLE EVER HEARD OF CLOSING THE GODDAMN DOOR?!” NO, IT’S MUCH BETTER TO FACE THESE K pic.twitter.com/Tma1nLCqUq

HAVE ANOTHER DRINK AND DRIVE YOURSELF HOME I HOPE THERES ICE ON ALL THE ROADS AND YOU CAN THINK OF ME WHEN YOU FORGE pic.twitter.com/D43KsTorFU 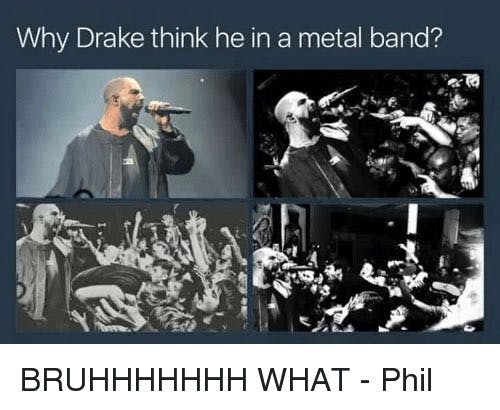 It Is Memes My Characters/Facebook

That last one combines screaming Drake with an up-and-coming meme about Drake receiving an upsetting text. It’s tipped to be the hottest Drake meme of September ’16.

Drake Gets a Text

What could Drake be looking at on his phone that’s got him so sad and shocked? There are a lot of theories online, and many of them have to do with Drake’s infamous unrequited crush on Rihanna. 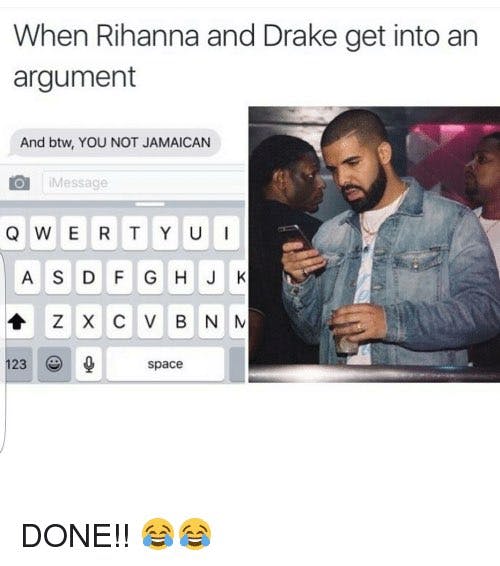 But really, anything could have Drake looking that way. Twitter is already having a field day with the photo.

when she said she doesn’t care where you eat and turns down your sixth straight suggestion with “it’s up to you” pic.twitter.com/pBEcAV6C3v

When you’re at the strip club wit the homies & get that Wht time are you coming home text pic.twitter.com/KzTgQoKIOJ

when she text you “can you pick up some trash bags” after you’ve waited in line and made it to the checkout counter pic.twitter.com/9i5mFnqkEa

“I always find out everything, you think I’m fucking stupid?!” Attachment: 8 images pic.twitter.com/j67yWwePZ6

“I asked you not to do that extra shit” pic.twitter.com/Ll5ZalgdqU

In November 2017, Drake did what he does best: Grace us with an accidental meme.

The Jumbotron during a Toronto Raptors game Drake was at cut to Champagne Papi during a candid moment—while he was pouring the contents of what appears to be a grapefruit-flavored Perrier into a white plastic cup. He instantly acted indecisively, and it was immediately relatable.

When the waiter comes to ur table after 20 minutes and asks if ur ready to order and u haven’t even looked at the menu https://t.co/MsJf6GhLSt

It’s the most recent Drake meme, but it definitely won’t be the last. Drake starts memes just by living his emotional, thirsty, tryhard, superstar daddy life.

Comedian and Twitter genius Desus told Noisey he thinks Drake is shrewd and fully aware of his meme value.

“He started as an easy target for memes, realized the social value of being a piece of content, and started creating situations/photos that he knew social media would devour,” Desus said.

Drake can’t help it, and the internet can’t help itself. Looks like we’re stuck with Champagne Papi until he runs out of weird, earnest things to do. So, forever?