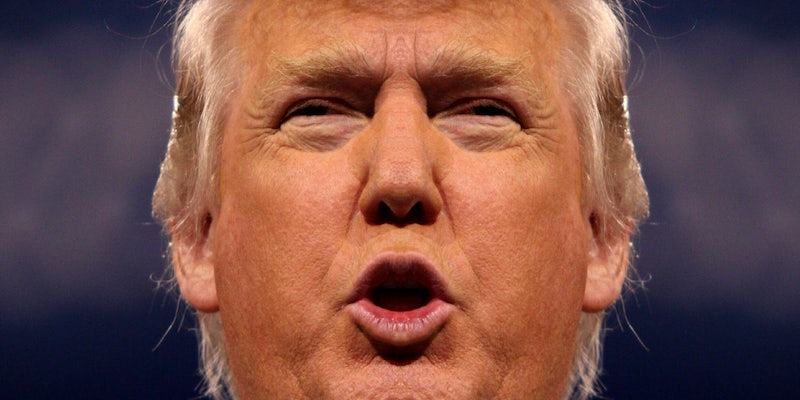 Trump, ‘covfefe,’ and the hideous, unending nightmare of 2017

What did Trump mean by 'covfefe?' More importantly, why does it matter?

An entire news cycle happened last night involving the president, and if any one person were being frank, they’d tell you it’s one you don’t need to read about. Yet, you’ll be lucky to find any other thing in your news feed this morning.

Here we are. Here we have been.

A minor thing happened, one which is not meritorious of your intellectual time or effort, and it was given full-fledged coverage from every media outlet because we are locked in a vicious downward spiral with the president in a quest for both pageviews and ways to biasedly reported on the president in what can be claimed as unbiased ways.

Last night, President Donald Trump began composing a tweet and encountered a malfunctioning autocorrect. Instead of fixing it and/or finishing the thought, he hit send.

It’s immediately apparent what he is attempting to say, and anyone feigning ignorance or incomprehension is being willfully dishonest.

We all know what “covfefe,” means, but painting it that way (unless you are Vox) doesn’t present the public at large with any intriguing reason to click on a nonsense story.

Trump, you may know, has repeatedly railed against what he views as media coverage of him that is more negative than what his predecessors faced. He may not have finished the thought, but you can assume that it was either: “this administration is running smoothly,” or “healthcare and tax reform are on schedule” or “America is finally winning again.”

In “What’s a ‘Covfefe’? Trump Tweet Unites a Bewildered Nation,” the New York Times penned a tongue-in-cheek article that gave a breathy tick-tock narrative of a social media network on edge, awaiting a decree from the president, as though the response from anything he sends out onto Twitter isn’t for the left to LOL all over no matter what it was.

It’s natural for the president’s tweets to start a news cycle, but it’s also a friendly reminder that only one in five people use Twitter and that less than a quarter of those people actively use the site.

The president has declared it the best medium to use speak directly with the American people, but he can only do that thanks to the current call-and-response nature of the coverage of his tweets.

The media doesn’t have an obligation to ever cover his tweets, but it does so because it’s found it to be the best way to shade its coverage in subtle and not so subtle ways. Thus, when you get a president tweeting something, it’s never a fair response from the majority of sites out there.

Covfefe was not poll tested or focus grouped. Another reason our @POTUS is simply great! He's human. He's real. He's just like us!

You won’t see that in many round-ups online.

Instead, you get the embeds of people bashing him in mainstream publications. Here’s Chrissy Teigen’s tremendous response. And hooray, Merriam-Webster responded in a pleasantly bewildered and betwixt fashion. You see it in the tone. It’s a way to circumvent fairness. The media isn’t laughing at his tweet. People are. The media is just reporting it.

His media manager (mostly likely) woke up this morning to the hullabaloo over the word and hit the delete, as we are wont to do, then had a laugh about it.

What was clearly a tongue-in-cheek attempt to add some levity to whatever mistake the president made was instantly painted as a lie.

Trump tweets a typo, and no one has a collective meltdown because the president makes a minor mistake, but the media paints it as a something of a Homeric episode in a willfully deceitful way because it needs the traffic. And because it hates the president.

You didn’t need to read any of this, but you do need to know that the system is broken.

And Donald Trump is the one who did it.