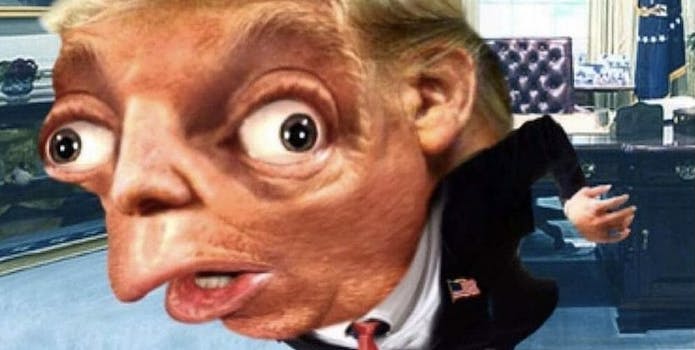 It's the meme for our political moment.

Mocking Spongebob, the sarcastic Spongebob Squarepants meme that burns people by repeating their statements back to them in sneering mIxEd CaPS, has proven itself over the past week to be the perfect meme for our dumb moment in history. When President Donald Trump fired FBI director James Comey, then allegedly leaked classified intelligence about ISIS to Russia, Mocking Spongebob was there.

The Trump version of the Mocking Spongebob face, created by Adam Padilla (and shared below), has emerged as the perfect meme to convey Trump’s third-grade approach to dealing with criticism.

The president’s actual response to the intelligence leak controversy wasn’t far off. He even employed “plus,” affecting the manner of a playground retort.

As President I wanted to share with Russia (at an openly scheduled W.H. meeting) which I have the absolute right to do, facts pertaining….

…to terrorism and airline flight safety. Humanitarian reasons, plus I want Russia to greatly step up their fight against ISIS & terrorism.

Trump has certainly engaged in his own childish mockery in the past. Perhaps the Spongebob meme seems to fit him so naturally because we remember the time he viciously imitated a disabled reporter on the campaign trail:

Who could have foreseen that, in 2017, one of our most incisive forms of social commentary would be to lampoon our reality TV-star president by comparing him to a cartoon sponge who lives in a pineapple under the sea and clucks like a chicken whenever he sees a plaid pattern?