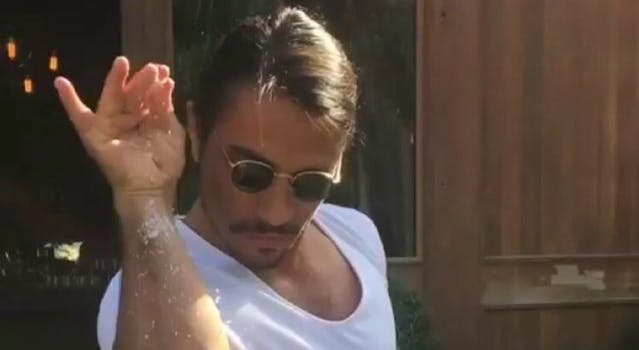 Everyone’s drooling over #Saltbae, the hot butcher who sprinkles his salt with style

So hot, but so extra.

A hot Turkish butcher is driving the internet wild this week with the flashy way he sprinkles his salt on a juicy chunk of meat. They’re calling him “salt bae”—”bae” being short for “babe,” or someone you’ve got a crush on—and there’s no doubt he’s attractive, albeit in a hipster way. But salt bae’s videos aren’t the real story. For that, you have to look at the “sprinkling” meme he’s spawned.

First, some background: Who is this “salt bae,” anyway? He’s Nusret Gökçe, a family man and professional butcher with restaurants in Turkey and Dubai. Here’s the video that’s making him famous, where he delivers a dusting of salt to a slab of “Ottoman steak.”

On a basic level, this has gone viral because people who love meat and hipsters think he’s sexy:

but saltbae is the universal lover.

He’s even got his own emoji:

But on another level, one which actually has the potential to be good, Saltbae’s sprinkling flourish has become a meme. It’s being used to embody totally owning a situation, with style:

A tweet from Bruno Mars employed the sprinkle in this sense, too. Here, it’s basically synonymous with a mic drop:

But it can also be used to describe situations where someone adds a little extra, or goes entirely overboard:

When your sibling is already getting shouted at and you remind your mum of other bad things they have done pic.twitter.com/X8Z4zXeRyX

me putting "lol" at the end of a one word text so i don't sound rude or bored https://t.co/Y6fHTm5RSi

Saltbae plays well with other memes, too:

If you’re feeling extra or doing the most, he’s your guy. Saltbae is easily the most popular meme of the month thus far, and he looks like he’ll probably endure thanks to his broad appeal. As with many memes, most of the creative work behind Saltbae came out of Black Twitter, but it took less than a day before he was fully absorbed by mainstream news sources and the BuzzFeed set.

This one is big. Look for him sprinkling his salt on some year-end meme lists in December.