SpongeBob SquarePants memes are taking over the internet

All your fave SpongeBob memes, straight from Bikini Bottom.

No television show has had a bigger impact on meme culture than SpongeBob SquarePants. It was a major presence on TV when today’s meme-makers were kids, and its appeal at the time transcended boundaries of race and class. SpongeBob is a nostalgic common language that nearly all teens and 20-somethings speak, and it offers 11 seasons worth of meme-able characters and settings. No wonder there have been so many huge SpongeBob memes.

Here’s our guide to the SpongeBob moments that have gone viral over the past few years, what they mean, and how to use them to their fullest potential.

10 SpongeBob memes for every occasion 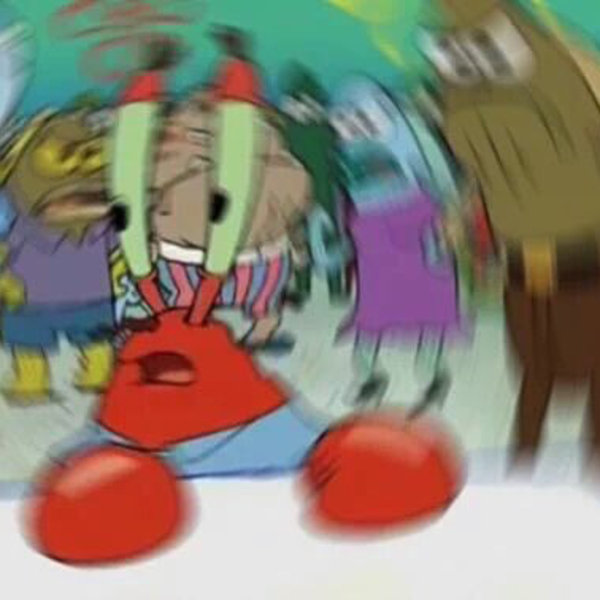 A blurry image of SpongeBob’s boss, Mr. Krabs, was 2016’s essential reaction image for conveying that you’re confused, disoriented, or in trouble. The screengrab comes from a scene in the season 2 episode “Patty Hype” where Mr. Krabs is beset by a mob of angry customers after selling them burgers that cause weird side effects. On the internet, it’s used for things like “when you just woke up from a nap and your parents are already yelling at you.” The episode that brought us Confused Mr. Krabs also inspired the SpongeBob Hype Stand meme, a handy way of saying something is better or more popular than something else. (We’ll revisit this theme shortly when we talk about the Krusty Krab vs. the Chum Bucket.)

In the relevant scene, a small crowd has gathered at SpongeBob’s upstart burger stand because his “pretty patties” are starting to become popular. After a news report about the brightly colored burgers, a much bigger crowd has gathered, and we see SpongeBob serving customer number 46,853.

The meme compares something that is mediocre or just okay (the small crowd) to something that’s great or incredibly popular (the big one). It’s basically the SpongeBob version of the Drake Approves meme.

Squidward, SpongeBob’s angry friend and coworker, briefly starred in his own meme called “Handsome Squidward.” It comes from an episode where Squidward ends up with square-jawed good looks after SpongeBob hits him in the face with a door.

Originally, the meme just involved playing music over the relevant scene, making it a lot funnier:

The image is associated with the incel community—men who aren’t having sex and identify as “involuntarily celibate.” It was famously paired with the catchphrase “The Difference Between Chad and Non-Chad is Literally a Few Millimeters of Bone,” which posits that men who don’t get laid were simply cursed by genetics with weak chins. It’s mostly used as a joke, but there are some men who take it seriously.

A lot of meme-makers are students, which means history classes are fresh in their minds. And because anything that can be combined with SpongeBob will be, they spent a couple of months in 2016 labeling scenes from the cartoon as “recolored” photos of historical events. Fair warning: much like the History Channel, the SpongeBob History meme was heavy on Nazi Germany. Primitive Sponge is a prehistoric version of SpongeBob, often used a reaction image to describe one’s primal instincts kicking in during an intense situation. He’s been used to describe panic during everything from school shootings and terrorist attacks to taking a final or meeting the parents.

Primitive Sponge is often referred to as “Spongegar,” but they’re actually two different characters in the show. Primitive Sponge, the two-fanged, loincloth-wearing cavesponge from the meme, is a prehistoric version of SpongeBob that Squidward meets when he travels back in time. Spongegar, introduced five years later, is an ancestor of SpongeBob who has a unibrow and a single buck tooth.

“Ravioli, Ravioli, give me the formu-oli” is a rhyming (well, sort of rhyming) line used by an evil robot version of Mr. Krabs to trick SpongeBob into revealing the secret formula for Krabby Patties. It turned into a meme because of all the other terrible near-rhymes one can make with “ravioli,” and also because of a disgusting prank video by YouTuber Filthy Frank.

Here he is, walking up to people with ravioli in his pockets:

Many of the rhymes in the meme are crude and terrible (“give me the death I deserv-ioli,” “shoot me in the head-ioli”) but sometimes they’re extremely clever. For instance, a student protestor was seen after the mass shooting at Stoneman Douglas High School in Parkland, Florida with a SpongeBob sign that said, “Ravioli, ravioli, give us the gun controli.” Well played, teens. Perhaps the biggest of all SpongeBob memes of 2017 was Mocking SpongeBob, taken from a scene where SpongeBob clucks like a chicken. The meme doesn’t have to do with clucking, though: it’s about repeating someone else’s asinine statement back to them in a mocking sarcastic tone. The captions for Mocking SpongeBob typically eMpLoy MIxeD cAPiTalIzAtIOn to convey the sneering tone of voice appropriate to the meme. In 2018, SpongeBob’s starfish friend Patrick Star finally got his own meme. An image of a threatening-looking Patrick about to pounce on SpongeBob became known as “Evil Patrick” (sometimes “Savage Patrick”) and he represented all of our worst impulses. Anything bad you’re thinking about doing? That’s the Evil Patrick inside you.

The image for this meme comes from the episode “Nature Sponge,” where SpongeBob leaves town and attempts to live in the wild. Patrick is trying to capture him and bring him back. Another still from the same episode, showing SpongeBob exhausted from the chase, became a meme a few weeks later. We’ll get to that below.

The Krusty Krab, the restaurant where SpongeBob works, is in competition with the nearby Chum Bucket. But, because the Chum Bucket doesn’t have the secret formula for Krabby Patties, it’s always going to be second-best. That’s what the Krusty Krab vs. Chum Bucket meme is all about: things that are second-best. Pale imitations of the original. Pancakes vs. Waffles? Marvel vs. DC? All the great rivalries are debatable using the Chum Bucket meme.

the only comparison that matters pic.twitter.com/mMJbfgccFf As promised, it’s time to talk about Tired SpongeBob, the third major Sponge meme of 2018. Tired SpongeBob looks like he’s just finished running a marathon. In the show, it’s because he’s been running from Patrick, who wants to take him out of nature and back to civilization (this also explains why Tired SpongeBob is naked). In the meme, it’s because of any number of slightly exhausting ordeals. The pettier the reason for being worn out, the funnier the joke.

Me after replying to one person pic.twitter.com/MEgKmf1PFl

There’s also a two-panel variation called Money SpongeBob. In one panel, SpongeBob is exhausted, and in the other, he appears to be happily spending a wad of cash. People use the joke to talk about how they love spending money on some things and hate letting it go for others. It’s a perfect meme for tax season!