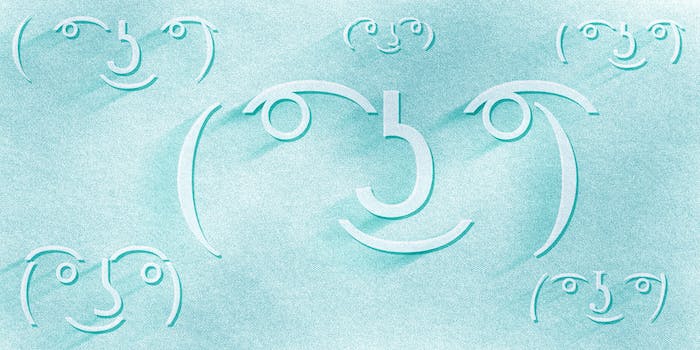 This emoticon looks innocent enough. It's not.

If you’ve been on social media or message boards for any length of time, chances are you’ve come across this sneaky emoticon:  ( ͡° ͜ʖ ͡°)

Usually, it’s used to communicate playful mischief, generally in a fun or harmless way, like this:

But more than likely, you were bombarded by the image, over and over again. The Lenny Face, or Le Lenny Face, as it’s known, has a weird history as a form of spam, clogging up forums and message boards. It’s tied to 4chan, that rowdy underbelly of web culture that’s produced some of the internet’s best memes, but it didn’t originate there.

The history of Lenny Face

The Lenny Face first appearance on a Finnish image board called Ylilauta (essentially the Reddit of Finland) in a thread about spam detector settings. According to Know Your Meme, a poster named Pierre posted the first version of the face with the comment, “this thread is leaking from the heavens” on Nov. 18, 2012.

It was an immediate hit. The thread was completely derailed. Everyone kept posting different versions of ( ͡° ͜ʖ ͡°) for days. The Lenny Face quickly made its way to various 4chan boards and was spammed everywhere, leading to several users being banned for posting too much ( ͡° ͜ʖ ͡°).

A few hours later—and keep in mind, this is all on the same day—the Lenny Face found its way to 4chan’s more personable cousin: Reddit. A poster named Dogcatcher1979 posted the ( ͡° ͜ʖ ͡°)  face with the caption “So I guess this is a thing now?” to the dedicated 4chan subreddit. An hour later, a group of 4chan users posted the ( ͡° ͜ʖ ͡°) face to spam and harass a subreddit dedicated to Isreal.

Hours into the face’s conception and it was already being used for hate. What a world ( ͡° ͜ʖ ͡°).

The meme’s spread grew further the next day, when a YouTuber uploaded a video showing the Lenny face being animated in various ways accompanied by the theme song to The Fresh Prince of Bel-Air. Why? It doesn’t have to make sense. It’s the internet.

From this point, the Lenny Face began popping up on other gaming forums, Yahoo Answers, and then Tumblr, Twitter, and Facebook. It had hit the mainstream in less than 72 hours. Before November had finished, more than 150 Facebook pages containing Lenny’s face ( ͡° ͜ʖ ͡°) were created, with tens of thousands of likes between them.

A year later on Tumblr, the Lenny Face earned a new name (“Deg Deg”) when a user named Franklenlobo used his computer’s text-to-speech program on the face. Here’s what happened:

Over the next few weeks, the post was shared more than 100,000 times. It inspired this YouTube video pronunciation, which now has over 4 million views.

Since then, Lenny has been grafted everywhere, from Lego and Minecraft to an album cover for Neutral Milk Hotel, and it’s funny almost every time. Lenny is an easy character to photoshop into a meme.

How to make your own Lenny Face

There’s a Google Chrome extension that helps you quickly and easily copy and paste every variation of the Lenny Face that you think of. And there are many Lenny Face generators available. Many of these generators allow you to make your own or create a randomized Lenny Face using various symbols.

Most internet memes whither and die within a few months. Consider the sharp rise and fall of Ken Bone, who quickly made his way to the mainstream and then promptly disappeared. But despite being initially dismissed as a “forced meme,” the Lenny Face has endured.