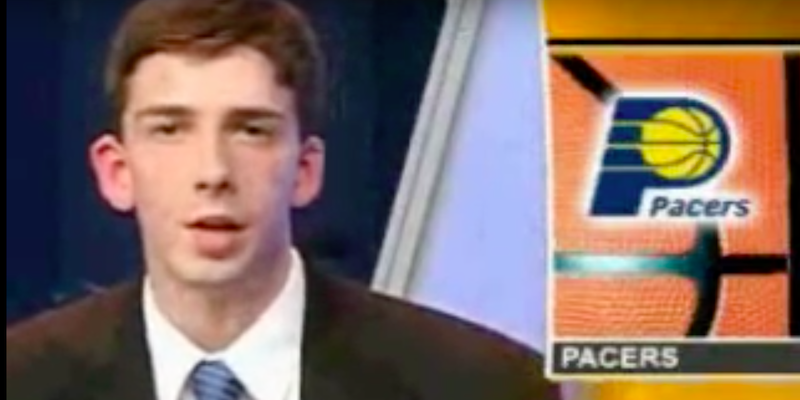 8 explosive facts about the ‘Boom goes the dynamite’ broadcaster

You know the phrase, now meet the man.

Brian Collins will never forget his virgin experience in front of a live camera. Back in 2005, the 19-year-old Ball State University freshman from Milan, Ohio, volunteered to anchor the sports segment on the university’s TV station after the scheduled anchor for the night called in sick.

The telecommunications major assumed everything would run smoothly. He just needed to read from the teleprompter while sports highlights ran on screen, manage the roughly four minutes of airtime, and safely guide the [email protected] episode into the next segment.

Thanks to an inexperienced tech working the teleprompter (seriously, did ANYONE show up for work that night?) and an unfamiliarity with just “winging it” when things go wrong, Collins flubbed and flummoxed his way through a painfully awkward live air moment and the dynamite wasn’t the only thing that went boom.

Collins’s trainwreck found its way to YouTube and the live broadcast is now one of the most well-known on-air meltdowns in history.

The original video has now been viewed over 10 million times and Collins’s quirky catchphrase of “Boom goes the dynamite” is a part of the pop culture lexicon. Here are some other odd facts and asides about the infamous broadcasting airball.

Boom goes the dynamite: 8 interesting facts about the broadcaster

Unlike ESPN anchors and other local broadcasters, Collins had no intention of dropping catchphrases on TV. In fact, he originally thought up the “boom” catchphrase in his dorm during an intense session of Mario Kart.

Collins told The Early Show co-anchor Hannah Storm back in 2005 that he and his dorm pals thought up sayings to taunt one another and make one another laugh during Mario Kart tournaments. “Obviously,” he told Storm “‘boom goes the dynamite’ was one of mine.”

2) The teleprompter was working

Contrary to popular belief, the teleprompter didn’t stop working during Collins’s three-minute-and-fifty-second nightmare. The new tech working the prompter accidentally fast-forwarded through the entire script. Collins was only able to make out random words before they quickly disappeared off the screen.

Collins admitted in an interview with Gene Wojciechowski of ESPN that typewritten pages were right in front of him for emergencies. All he had to do was read right from the script. Unfortunately, the pages were completely out of order. Collins recalls realizing in that moment that “tonight’s not going to be a good night.”

Much like any unfortunate meme, Collins was also subject to hate mail and harassment, even though his screw-up predates Twitter and Facebook was just in its infancy.

“You do get hate mail from people who just come after you,” Collins told CBS News in the Early Show interview. “You get lots of phone calls. At one point, we had to unplug our phone at school just because of how many phone calls we were getting.”

4) A company tried to trademark the phrase

In 2005, a sportswear company from San Diego, California, filed a trademark application for the phrase “Boom goes the dynamite.” They wanted to print it on T-shirts.

According to Ball State University News, the company e-mailed Collins to propose a business partnership for the T-shirt sales. They proposed to pay Collins $1 for every shirt sold and $200 for every 1,000 shirts sold. They also offered to donate $1 per shirt to create journalism scholarships at Ball State University.

Collins never responded to the offer.

5) The flub caught the eye of a famous alum

At the height of the “Boom goes the dynamite” craze, David Letterman had Collins on “The Late Show” to discuss his moment in the hot studio lights. Letterman had a special affection for the young newscaster. The talk show legend studied radio and television at Ball State University and graduated in 1969. After graduation, Letterman worked in Indianapolis as a radio talk-show host, children’s show host, and a late-night news anchor and weatherman. On one particular broadcast, Letterman reportedly miffed higher-ups when he congratulated a tropical storm on being upgraded to a hurricane.

Years later, Letterman donated a plaque to the school that reads, “Dedicated to all ‘C’ students before and after me!”

Collins’s trademark motto has appeared in countless TV shows. Collins himself was the subject of a Web Redemption on Tosh.0.

TBS went so far as to recreate Collins’s “Boom goes the dynamite” moment during the 2014 MLB playoffs. Instead of bringing back Collins to give it another shot, TBS enlisted the help of former baseball players who just naturally seem uncomfortable in front of a live camera.

7) Collins had the guts to try newscasting again

If Brian Collins never stepped foot in a news studio again, or never sat down in front of a live camera, it would be perfectly understandable. But the Ohio native didn’t let his four minutes of sports infamy deter him from pursuing a career in broadcasting.

Check out this compilation of Collins a few years removed from his big moment.

According to a piece from Business Insider, Collins graduated from Ball State with a degree in telecommunications and landed a job with an ABC affiliate in Texas, even though “some people in the newsroom didn’t like the idea of hiring a notable viral star.”

These days, Collins is working behind the camera and not letting his words do the talking. His LinkedIn profile states that he’s currently a content producer in Kentucky.

Being a viral sensation isn’t always best for the ego, or the career, but Collins seems to have taken it all in stride and lived to fight another day. He’s even proud of at least one aspect of the four minutes when his broadcast career almost went boom in front of millions of people.

“The one thing I was proud of,” Collins admitted to ESPN in the 2005 interview, “I didn’t just get up and walk out. I didn’t die. I took it until the end.”