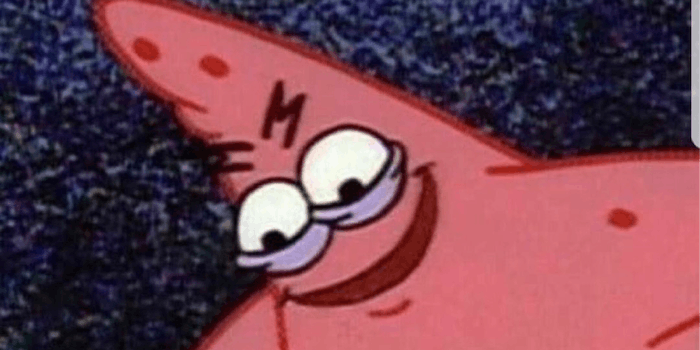 SpongeBob SquarePants has arguably given more to the internet meme ecosystem than any other television show, and it just keeps on giving. Get ready to meet Evil Patrick, the latest example of a Spongebob screenshot so powerful that it instantly became part of the internet vernacular. If you’ve got any devilish, scheming thoughts to let out, Evil Patrick is your guy.

Witness the birth of everyone’s favorite new bad boy. This March 1 tweet by Andre Thompson racked up more than 200,000 likes and nearly 100,000 retweets:

Me leaving the pot in the sink because “it needs to soak” pic.twitter.com/8q29xu4ua2

Evil Patrick (also sometimes called “Savage Patrick”) actually started a few days earlier, with a sex joke that was only a fraction as popular. But it was the pot in the sink” joke that established this leering, malevolent version of Spongebob’s pal Patrick Star as the face of petty villainy. Over the next few days, he would go on to commit all kinds of other minor infractions:

Me reading your message previews from the pull down bar on my phone and not answering for the next 6 hours pic.twitter.com/F4FghFHPb7

Some people even upped their meme game by adding hair or accessories to give Evil Patrick additional dimensions:

On Reddit, the meme is more edgy and intentionally offensive, often going for cheap sexual humor:

And some are getting meta, subverting the meme altogether:

The screengrab in the Evil Patrick meme comes from the Spongebob season 1 episode “Nature Pants.” The context is totally irrelevant to the way the image is used as a meme, but the basic gist is that Spongebob has run away to live “in nature” and a crazed Patrick is trying to snare him with a net and make him come home.

This is first big Spongebob meme since 2017’s “Mocking Spongebob,” which similarly took a scene from the show out of context. A still of Spongebob squawking like a chicken came to stand for mocking someone by sarcastically rEpEaTInG tHeiR oWn WorDs baCk to ThEM:

The Evil Patrick meme comes from a long, proud(ish) lineage of similar examples, where a single image comes to represent a particular concept or attitude. It’s a more evolved version of  “that feeling when” reaction memes, a popular format where image represents the poster’s feelings in a certain situation—it’s the same joke, but it doesn’t lean on a “when” caption.