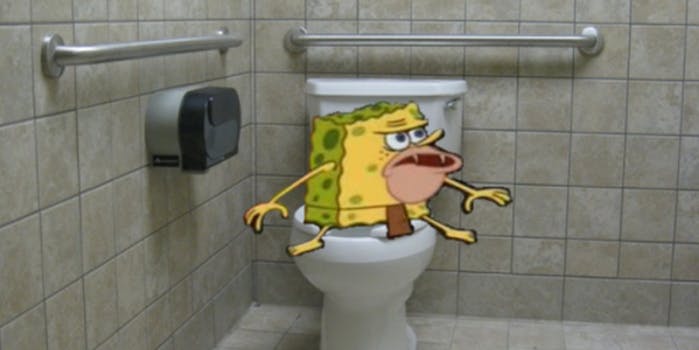 ‘SpongeGar’ memes bring out the primal in everyone

Looks like SpongeBob SquarePants‘ prehistoric ancestors have come out of their caves to conquer the Internet’s heart.

The online masses have a newfound affinity for the Primitive Sponge, from a 1999 episode of the cartoon titled “SB-129.” He lived 546 million years ago, during the Cambrian Era, was best friends with Primitive Star, and had a fear of jellyfish. Today, he’s the latest SpongeBob meme to make a splash, hot on the heels of the Mr. Krabs blur meme.

While the Primitive Sponge is currently having a moment in the online spotlight, it looks like there’s been some confusion about his actual name. Many have mislabeled this primal character as SpongeGar, another one of SpongeBob’s ancestors—but SpongeGar came after Primitive Sponge and was more advanced. Primitive Sponge also looks way more Neanderthal, while SpongeGar is of your more humanoid caveman variety.

The mix-up has had SpongeGar attracting far more search traffic than Primitive Sponge, even with Primitive Sponge’s image rapidly spreading across the Interwebs. Interest in the term “SpongeGar” has skyrocketed in the past month, with more people than ever scurrying on over to Google to figure out more about the cartoon character. Meanwhile, “Primitive Sponge” has little traction.

According to Know Your Meme, these SpongeBob ancestors have had an Internet presence for a while now. But Primitive Sponge found his way onto Twitter in early 2015 thanks to @spongebobgetsit.

When you're having sex vs. when you're meeting her parents pic.twitter.com/SCSdgJCXCu

While Primitive Sponge might not be evolving himself, his meme has found new meaning in 2016. He’s been edited into pictures to convey a primal reaction in a given situation. For instance, trying to get laid but needing the proper protection before the happy ending can happen.

There’s been some confusion about how Primitive Sponge differs from the Mr. Krabs blur meme. The crustacean is more applicable to a situation of sudden panic or social distress. Primitive Sponge is “FUCK!” while Mr. Krabs is more “What the fuckkkkk?!” Think of them as the two sides of the classic “fight or flight” response to a sudden surge of adrenaline.

SpongeGar (Caveman Spongebob) is the new meme rising in popularity. The SpongeGar memes out there are hilarious. pic.twitter.com/ovLvnLDFCJ

If you’re looking for more of these Primitive Sponge memes, you can find a ton of them under the technically incorrect tag “SpongeGar.” There’s even a Spongegar subreddit. It might be the wrong name, but since the masses are already calling him SpongeGar, there’s probably no going back.