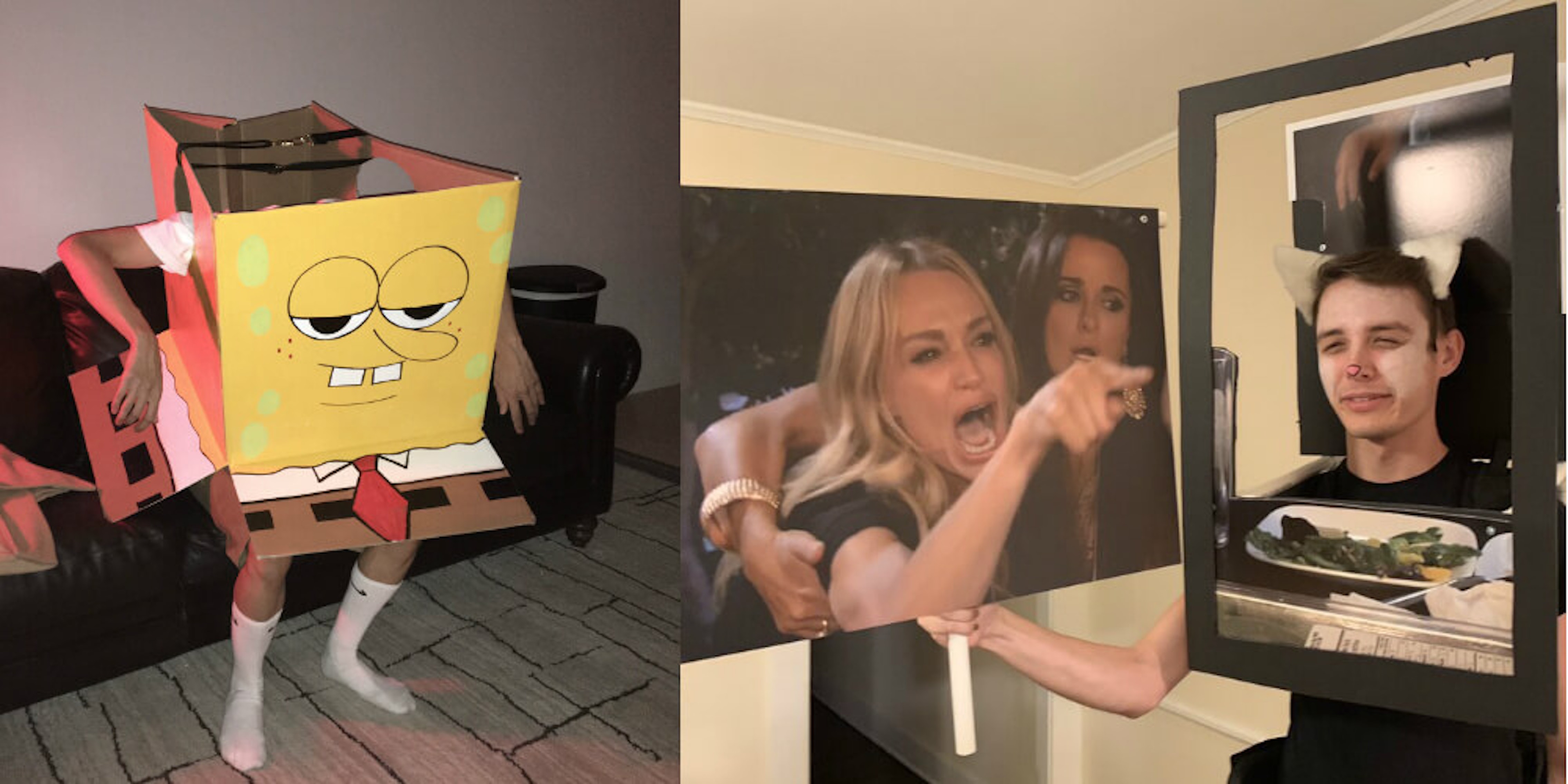 From ‘Imma head out’ and Area 51 to 'and I oop' and Corn Pop, memes are dominating Halloween costumes this year.

Forget the basic cat costume, let’s accept our obsession with this year’s best internet memes by dressing like them for the holiday.

Here are some of the best internet takes.

The alleged gang leader from Joe Biden’s past, Corn Pop

To be clear, no one really knows who this guy is or why Biden told this story. But in 2017, the former vice president alleged he met a gang leader, named Corn Pop, as he was lifeguarding a predominantly Black pool in the summer of 1962.

“Corn Pop was a bad dude. And he ran a bunch of bad boys,” Biden says in the video. Biden says he told Corn Pop to get off the diving board “or I’ll come up and drag you off.”

The story is… a lot to say the least. But it led to some hilarious memes about who this guy might be—or if he really exists at all.

I, too, have been menaced by a Corn Pop and his gang pic.twitter.com/yJESVWjvJk

All hail, SpongeBob SquarePants—king of the internet memes.

Between the infamous confused Mr. Krabs meme to the MoCkInG sPoNgeBoB meme, there’s no shortage of inspiration to draw from for this Halloween.

The latest craze to hit the interwebs, however, is the Imma Head Out meme, which shows a dejected-looking SpongeBob sitting in a chair holding a remote control. Someone added the phrase, “IGHT IMMA HEAD OUT” in black text across the bottom of the screencap and voilà.

For whatever reason, this took the internet by storm.

money 20 min after entering my bank account on payday pic.twitter.com/hKsogtiQcb

The Real Housewives and a Tumblr famous cat

so about my costume last night pic.twitter.com/TN3HE1PT4B

This costume is the culmination of two very internet famous memes: Taylor Armstrong from The Real Housewives of Beverly Hills yelling and pointing at someone just out of frame couples and a photo of a white cat posted by Tumblr user deadbefordeath with the caption: “he no like vegetals.”

Separately, these memes were hilarious—but then internet users went a step further and placed them together to make it look like Armstrong was yelling at the cat. The pairing was a beautiful marriage of two internet-famous icons.

These photos together is making me lose it pic.twitter.com/kJi9d8MpbG

How do you do, fellow kids?

I was a meme for Halloween pic.twitter.com/guRRAbXJjs

In the world of TikTok, Fortnite, Tumblr (do people still use that?), Instagram stories and memes, it’s harder than ever to connect to today’s youths without sounding like the Steve Buscemi “How do you do, fellow kids?” line from 30 Rock.

One professor, on Reddit, went a step further and asked internet users how to pull the ol’ “old person trying to hard to be young” gag. The results were delicious.

“If they do something that you don’t approve of, say ‘This ain’t it Chief,’” suggested one Redditor. “Replace ‘dude’ with ‘fam.’ Replace ‘cool” with ‘lit.’ A couple dabs won’t hurt. Dabs are basically dead, but it’s still embarrassing if you do it.”

“Say Yeet as much as possible,” another wrote. “As an expression, when throwing something (like into the bin, especially then), or when doing something mundane like changing the slide in a PowerPoint.”

When you work in Marketing, your Halloween theme is a meme #Area51 pic.twitter.com/m5YGnLQTWM

Has anyone checked on the aliens from Area 51 recently?

In a Facebook event that went viral—and kind of came to fruition—over 1 million people RSVP’ed yes to storming Area 51 claiming, “They can’t stop all of us.” The goal of the event was to raid the highly classified United States Air Force facility and unleash the aliens everyone believed lived inside.

Of course, the Air Force didn’t think this was a joking matter. A spokeswoman told the Washington Post that she highly “discouraged” anyone from coming to the area.

That, of course, didn’t stop the internet from making a complete mockery of the situation.

He’s training to free the aliens at Area 51… pic.twitter.com/5oz1Q5rUZ6

@ArianaGrande we dressed up as an expired meme for halloween. how’d we do? pic.twitter.com/TNgQcwPO1Z

Ah, we miss this relationship. If not for the songs like Thank U, Next, then definitely for the memes.

Throw it back to the times when these two were clearly smitten with one another and were taking a stroll in New York City. Grande can be seen starting at Davidson lovingly while suggestively licking a lollipop. Davidson, meanwhile, appears to be trying to avoid the attention of the press and cameras while looking downwards. He also has a lollipop squished between his cheeks.

As the photo went viral, it, of course, received meme treatment.

I couldn’t decide so whatever happy Cancer season

Ooh shit, listening to your problems is going to be my new favorite distraction from my own ;)))))

Almost every Twitter user by now is familiar with the reaction clip featuring Jasmine Masters from RuPaul’s Drag Race who interrupts her own story by exclaiming: “And I–oop!”

The video came to be in 2015 when Masters was going on a rant via YouTube about people who can’t handle their liquor. “I don’t wanna be nobody’s fuckin babysitter,” she says in the video. “Hell, sometimes I might wanna get fucked up and be carried to the car. Hell, let me sleep in my backseat, I done it many of times. Because I don’t wanna get fucked up and drive and be driving while I’m already fucked up, so bitch I crash in my backseat for a couple of hours, and I–oop!”

The reaction came from Masters accidentally smacking herself in the balls–something she announces before abruptly cutting the video. But the meme evolved.

when I’m mid convo and a period cramp paralyzes me pic.twitter.com/0lo9ZLtY5s

We all love hilarious and uncommon baby names. Yes? No?

Such is the case with “Lakynn,” the supposed name of a soon-to-be-born baby. According to a meme that has since gone viral, the mom in question almost named her baby “Taylee,” “McKarty,” “Nayvie,” and “Maylee” before setting her sights on Lakynn.

This costume goes out to you, Lakynn.