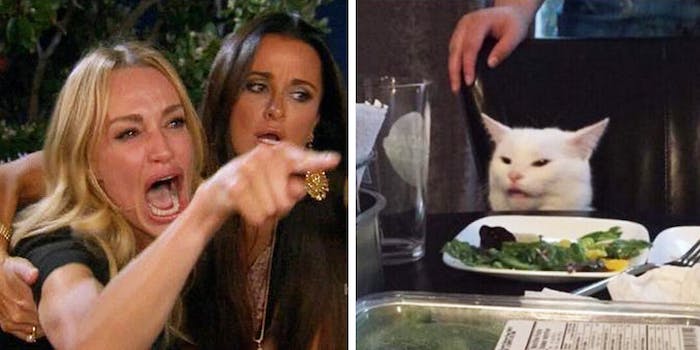 We have 'The Real Housewives' and an Instagram-famous cat to thank for it!

Anyone who frequents Twitter has probably noticed a rather specific meme involving a woman yelling at a cat.

In the first panel, an emotional blonde woman (who reality TV fans may recognize as Taylor Armstrong from The Real Housewives of Beverly Hills) yells and points at someone just out of frame. In the second panel, this is revealed to be a cranky-looking white cat sitting in front of a plate of vegetables.

It’s a meme that is nearly eight years in the making.

Where did the ‘woman yelling at a cat’ meme originate?

On Dec. 5, 2011, Bravo aired the episode “Malibu Beach Party From Hell” from the second season of The Real Housewives of Beverly Hills. As the title of the episode suggests, what should have been an otherwise carefree evening of drinking wine at a glitzy beach house went awry when Armstrong clashed with fellow cast member Camille Grammer.

At the time, Armstrong had just lost her husband Russell to suicide following a tumultuous and allegedly abusive marriage. And Grammer was, shall we say, less than sympathetic when gossiping about Armstrong’s plight to the fellow housewives.

Eventually, tensions reared to a head, resulting in the now-infamous screencap of Armstrong pointing and screaming at another party-goer in attendance, while Kyle Richards attempted to calm her down. The dramatic moment was captured by The Daily Mail in an episode recap published the following day on Dec. 6—and subsequently went viral.

Fast forward to June 19, 2018, when Tumblr user deadbefordeath posted the following image of the aforementioned white cat, with the caption: “he no like vegetals.” The post went on to gain over 50,300 likes and reblogs within a year.

The cat in question has actually been identified as Smudge the Cat who boasts an Instagram following of over 280,000 followers. (Or, Confused Cat at Dinner, as he is sometimes referred to.)

As you can see in some of his Instagram posts, below, Smudge does indeed have a nebulous relationship with vegetals.

The evolution of the meme

“Woman yelling” and “confused cat” would have continued to exist as two separate memes, until on May 1 of this year when Twitter user @MISSINGEGIRL tweeted the two images side-by-side.

“These photos together is making me lose it,” she wrote, and it didn’t take long before the tweet to go viral, amassing over 78,000 retweets and 275,000 likes in just over three months.

Then people naturally began captioning the pair of images.

“Me accusing my cat of cuddling with other people when I come home drunk after bottomless brunch,” one person wrote.

According to KnowYourMeme, one of the other first well-known examples of the woman yelling at a cat meme was when, just a month later on June 2, redditor PerpetualWinter posted the following example riffing off of Knicks fans.

There’s a storm comin from Mavericks

‘Woman yelling at a cat’ memes

From there, the woman yelling at a cat meme exploded in popularity—both on Twitter where it originated, and of course on r/DankMemes. As you can see below, the versatility of the meme makes it suitable for joking about everything from video games being blamed for gun violence to the novel Pride and Prejudice by Jane Austen.

Thanks for the free meme template u/-69– from memes

It do be relaxing af from dankmemes

Those bastards lied to me from dankmemes

Who tf is you from dankmemes

To think, had it not been for two white ladies getting into a Chardonnay-fueled argument all those years ago, the world would have been deprived of a woman yelling at a cat. Quite possibly, it may just go down as the most important pop culture contributions of the Real Housewives franchise yet.