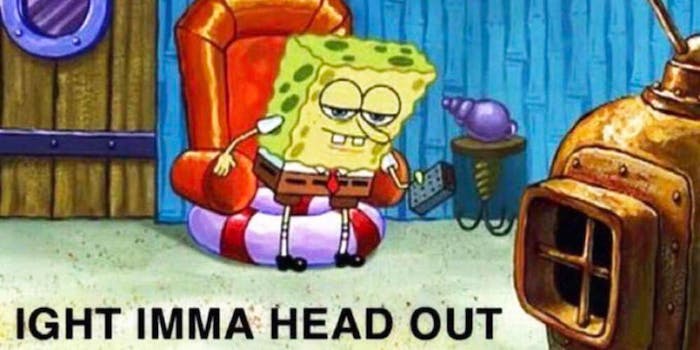 ‘Imma head out’ is the latest SpongeBob reaction meme

'Money 20 minutes after entering my bank account on payday...'

If the internet had to collectively come together and name one patron saint of memes, a unanimous decision would likely go to SpongeBob SquarePants. The ceaselessly optimistic sea sponge (along with his various friends) have been the inspiration of dozens upon dozens of memes over the years–so much so that Nickelodeon recently came out with an entire line of SpongeBob meme toys. And now, we can throw another on the pile: the SpongeBob “Imma Head Out” meme.

The Imma Head Out meme, which depicts a dejected-looking SpongeBob sitting in a chair holding a remote control, is in itself is an offshoot of the “alright bro I’m boutta head out” meme that took off in July of 2018.

“Dudes love smoking excessive amounts of weed so they can awkwardly sit and look down at the floor without saying a word for 30 minutes and then go ‘alright bro I’m boutta head out,'” tweeted user @BBWslayer666 at the time.

Twitter responded with literally hundreds of memes as the tweet quickly went viral, however, one in particular stuck out, featuring the following image of a live-action SpongeBob parody.

However, the first known instance of the Imma Head Out meme being paired with the SpongeBob screenshot was in July of 2019, according to RuinMyWeek when Twitter user @_Jasmineimani__ replied to a WorldStar fart prank with the meme.

From there, the meme began slowly picking up steam on Twitter and Reddit as a way of expressing abject disappointment with a situation—whether it be financial or otherwise—as you can see from the few examples below.

Me after the first game: pic.twitter.com/nl1qlOPRDR

money 20 min after entering my bank account on payday pic.twitter.com/hKsogtiQcb

The spongebob ‘aight imma head out’ meme is funniest meme format I’ve seen in so long I cry at almost everyone pic.twitter.com/pUeDdj6F3p

The Imma Head Out meme can also be used interchangeably with the awkward Breaking Bad dinner scene meme, or of any instance of someone wanting to get out of an intimate yet uncomfortable situation.

It gets awkward real quick… from BikiniBottomTwitter

Imma head out bro from dankmemes

And then some people got tongue-in-cheek creative with the Imma Head Out meme:

Ight imma head out from memes

UNEXPECTED ITEM IN THE BAGGING AREA from BikiniBottomTwitter

The origin of the “Imma Head Out” meme actually comes to us from a March of 2001 episode of SpongeBob SquarePants called “The Smoking Peanut,” in which SpongeBob is led to believe that he upset Clamu the giant oyster, an attraction at the Bikini Bottom Zoo, by throwing peanuts at her.

That is later revealed not to be the case, but not before SpongeBob learns of the incident’s aftermath during a local news report. Despite the fact that the meme suggests that SpongeBob is getting up and leaving, he was actually apparently sitting down in the episode.

But that’s here nor there when you consider how impressive it is that the Imma Head Out meme has been 20 years in the making. Or even that the Mocking SpongeBob meme has been with us for just two scant years and some change now! Never underestimate the timelessness of SpongeBob SquarePants, is all we’re saying.