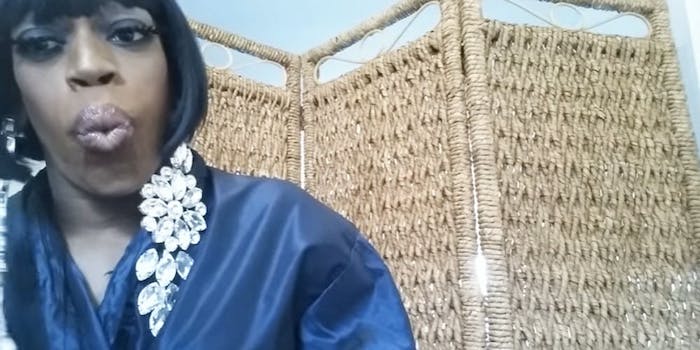 Some of you may know drag queen Jasmine Masters as a Season 7 contestant on RuPaul’s Drag Race, and later as a contestant in 2018’s RuPaul’s Drag Race: All Stars. But earlier this year Masters skyrocketed to viral fame for a completely different reason, as the source of the “And I oop” meme—sometimes known as “Anna ou.”

Anyone who regularly spends time on Twitter is more than likely familiar with the reaction clip featuring Masters by now, who interrupts her own story by exclaiming: “And I—oop!”

The moment actually originated from a 2015 YouTube video titled “Jasmine Masters handle your liquor,” in which she goes off on a fiery rant about friends who go out to the club and get wasted and essentially need to be babysat.

“I don’t wanna be nobody’s fuckin babysitter,” she says towards the end of the video, just after the four-minute mark. “Hell, sometimes I might wanna get fucked up and be carried to the car. Hell, let me sleep in my backseat, I done it many of times. Because I don’t wanna get fucked up and drive and be driving while I’m already fucked up, so bitch I crash in my backseat for a couple of hours, and I—oop!”

What most people don’t know is that the Shyamalan twist here is that Masters accidentally smacked herself in her balls. “Ahh, I just hit my balls. Hoo it just got hot, I gotta get out of here. I’m done,” she continues, before abruptly cutting off the video.

According to Know Your Meme, one of the first known and widely shared uses of the meme occurred on March 1, 2019. Twitter user @eazy_a_714 used the video to comment on a tweet about Jordyn Woods appearing on Jada Pinkett Smith’s Red Table Talk Facebook Watch talk show, to open up about being accused in the Tristan Thompson cheating scandal.

“Jordyn said ‘I would never try to steal someone’s man- I don’t need your situation’ lmaoooo,” read the original tweet.

this is the one, this tweet right here pic.twitter.com/vbVWJeFZ8K

Another popular early example is when user @cherryemoticon used it to describe almost snitching on yourself while relaying a story to your parents.

The meme has since exploded in popularity as a way to convey interrupting one’s own story due to a surprising or salacious development.

when I’m mid convo and a period cramp paralyzes me pic.twitter.com/0lo9ZLtY5s

And of course, it became a popular way of reacting to the final season of Game of Thrones:

daenerys when she kissed jon snow and felt something in her chestpic.twitter.com/9emi70Wu2f

At this point, the meme has become so ubiquitous that you no longer even need the video to understand the context.

And then people also began getting creative with the audio itself, splicing it over completely unrelated videos such as the ones below:

The clip also naturally lends itself well to TikTok, as more recently it began to go viral on the video app. Just this week, jazz pianist Charles Cornell—known for setting music to viral videos—went next level by composing the following incredible instrumental arrangement to Masters’ video:

For her part, Masters (real name Martell Robinson) seems to be loving the attention. Earlier this month, Robinson posted an out-of-character video on Instagram revealing himself to the the originator the meme, and thanking fans for the support–even if it meant laughing at him for “smashing on [his] balls.”

Masters has likewise been sharing the various memes and TikTok videos on her Instagram, as well as compilations of teens imitating her now-infamous line.

But not everyone is thrilled with the viral craze, as evidenced by a recent tweet by another RuPaul’s Drag Race alum, Trixie Mattel:

Why did we have to tell The Straights about “and I OOP-“ ???

To be fair, The Straights usually do ruin everything, which in itself is a low-key “And I oop!” worthy statement.