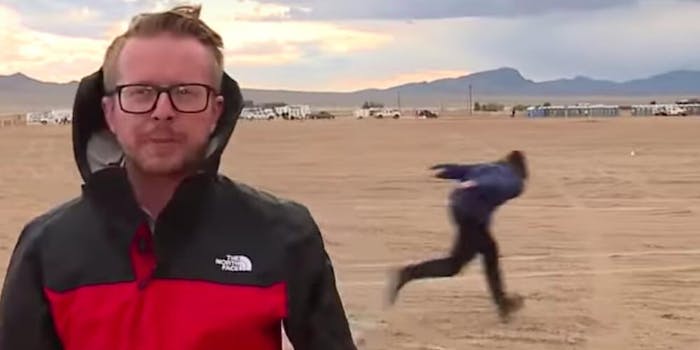 #LiveFromTheArea51Raid: Memes and highlights from the desert

Is the government blocking streams, or is it just bad reception?

Against all advisement, people showed up in the Nevada desert on Friday to “storm Area 51” after a joke Facebook event accidentally snowballed into a real thing. The cellphone reception is bad, and the memes are plenty as people report live to the hashtag #LiveFromTheArea51Raid.

Matty Roberts created the Facebook event “Storm Area 51, They Can’t Stop All of Us” in late June as a joke, but by late August, millions had RSVPd on Facebook, and every room in nearby towns was booked. It looked like serious or not, thousands would be showing up.

They did show up, though mercifully for the nearby small towns, in much smaller numbers than predicted. The majority of people talking about “seeing them aliens” were never serious about going to Nevada to take direct action, and it’s likely that many who were coming for a party changed plans when the plans for Alienstock relocated from the tiny town of Rachel, Nevada, to downtown Las Vegas. According to the Alienstock site, this was due to “lack of infrastructure, planning, and risk management, along with concerns raised for the safety of the expected 10,000+ attendees.”

Reception in the area isn’t great, so credible reports are rare among the memes and fakes flooding #LiveFromTheArea51Raid. But there are some widely discussed highlights. When the Facebook event was created, the description said people should “Naruto run” into Area 51. A brave civilian practiced his run Thursday during the filming of a local news segment.

A small group of people gathered outside the Area 51 gate early this morning before the sun rose, holding signs with messages like, “Raid that alien booty,” and “save ET from the government.” Another sign had a drawing of the Predator with the words “predator or prey?” Guards at the gate appeared unamused in photos and videos, as the handful of would-be alien rescuers marched in a circle while chanting, “Clap them cheeks! Clap them cheeks!”

The best thing about the raid so far are the signs #Area51storm pic.twitter.com/RuzzvRZjat

So far, things have been going relatively smoothly, even if it’s causing a massive headache for the nearby town of Rachel and military personnel in the area. According to the Evening Standard, around 75 people were at the gate this morning, no one was hurt, and two people were detained.

It’s not Area 51 without conspiracy theories and opportunists. Live streams from the area have been choppy at best, and some people looking for answers in the #LiveFromTheArea51Raid hashtag are suspicious that the government is interfering to stop the truth from getting out. Some of the conspiracy theories are certainly just shitposts, but in 2019, it’s not always easy to tell.

Yoooo the streams are full on cutting out like some horror movie flashing green and static and shit tf #LiveFromTheArea51Raid pic.twitter.com/f8cWT6x9Za

They’re using jammers or other wack stuff to stop the live-streams. This is probably a sign to back away. #LiveFromTheArea51Raid pic.twitter.com/vbPWA3e8Wx

As the day goes on, things are bound to get stranger, and some internet onlookers are worried it might even get violent.

#livefromthearea51raid I'm about to see either the greatest event of the 21st Century or the worst. pic.twitter.com/4mASda1POX

At least for now, we can sit back and enjoy the memes.

Watching all the aliens fly away from earth in their spacecraft after the successful Area51 raid #LiveFromTheArea51Raid pic.twitter.com/ukmgHKxHKu