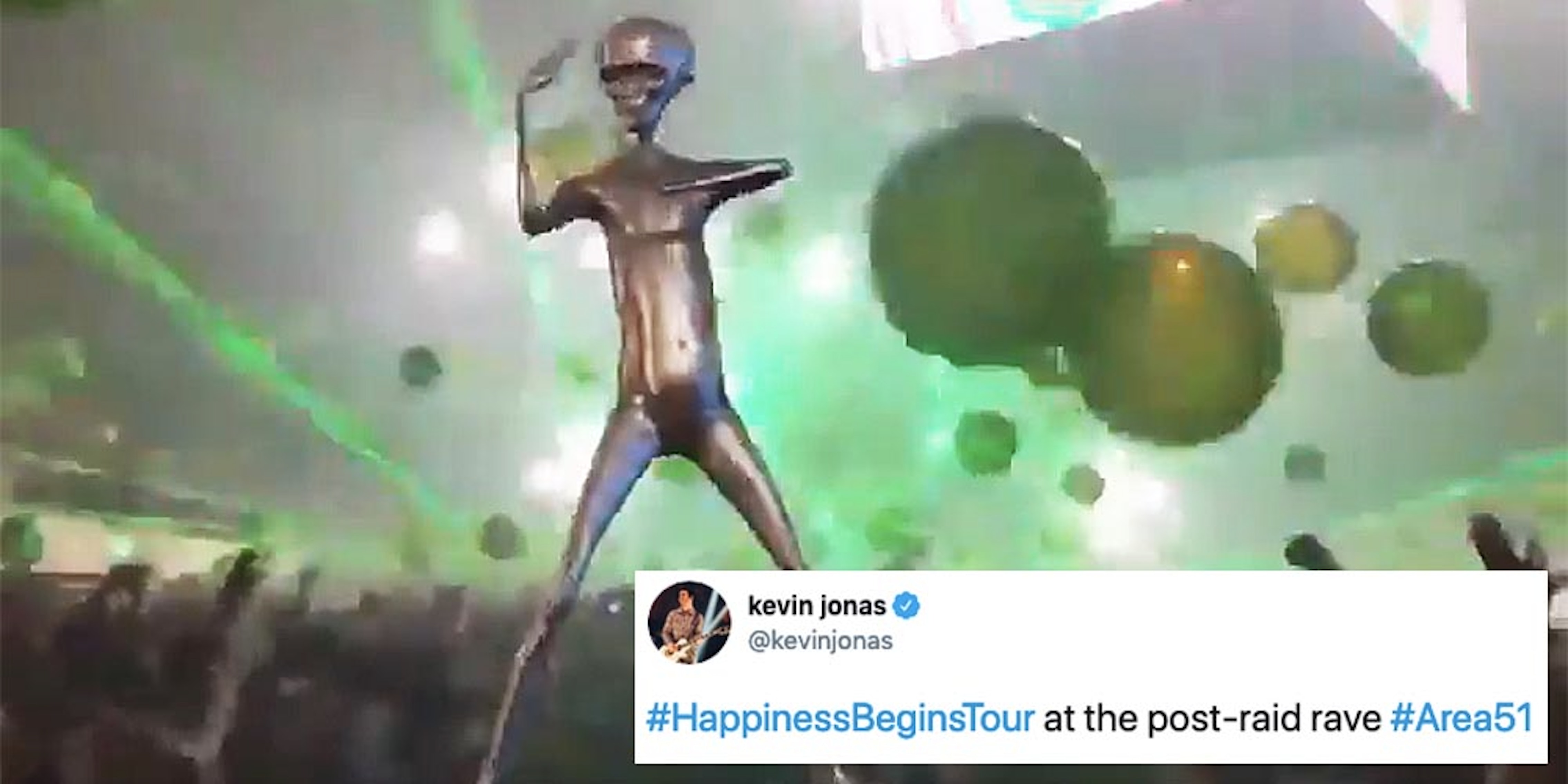 'Storm Area 51' memes joke about potential outcomes of breaking into the facility.

There are now over one million people and counting who have RSVP’ed as “going” (with nearly one million more interested) to the “Storm Area 51, They Can’t Stop All of Us” Facebook event scheduled for Sept. 20. To refresh your memory, the goal of the event is to purportedly raid the notoriously highly classified United States Air Force facility to between 3 and 6am. Naturally, this has led to a flood of Area 51 memes.

“We will all meet up at the Area 51 Alien Center tourist attraction and coordinate our entry. If we Naruto run, we can move faster than their bullets,” the creators of the event wrote in the description, referring to the titular character of the popular Japanese manga series who is known for running with his hands behind his back to decrease wind resistance. “Lets see them aliens.”

On Friday, the Washington Post reached out to Air Force spokeswoman Laura McAndrews to gauge what would happen if people actually show up and try to break in. Although she could not provide specific details of the military’s plans for dealing with any potential rabble-rousers, she did issue a warning.

“[Area 51] is an open training range for the U.S. Air Force, and we would discourage anyone from trying to come into the area where we train American armed forces,” McAndrews said. “The U.S. Air Force always stands ready to protect America and its assets.”

Well, this all sounds just fine. For better or worse, it seems as if there are enough people out there serious enough to make this a thing. And although the event itself is still over two months away, the internet is already chock full of memes to predict what might happen if the alien-obsessed are somehow able to carry out their mission.

For example, there’s that whole matter of storming the Area 51 site in the first place.

He’s training to free the aliens at Area 51… pic.twitter.com/5oz1Q5rUZ6

On September 20th from dankmemes

And God forbid they actually get in because as McAndrews stated above, government officials are not exactly going to welcome the hoards with open arms. In other words, they’re going to react.

me when one of the guards at area 51 try to stop me pic.twitter.com/4R3mfGM46z

And then there are those who are already getting ahead of themselves and imagining with memes what it’s going to be like hanging out and partying with aliens. Because after all that time locked up you’d think the little green men are gonna wanna blow off some steam, right?

My alien when I take it to its first spring break #Area51 pic.twitter.com/y7JIgf2Ykn

Me showing up to Area 51 with iced coffees for all the aliens pic.twitter.com/wnBzUOWzB2

The aliens from Area 51 tryna ask for directions after they join our civilization: pic.twitter.com/goBxgHcndQ

Kevin Jonas even went so far as to joke about kicking off the Jonas Brothers’ “Happiness Begins” tour at the site:

Thankfully, not many people are looking for alien “MILFS,” as this person is:

He has spoken from memes

Others are pointing out the possible downsides to breaking aliens out of Area 51 including but not limited to the imminent destruction of mankind.

Aliens walking out of area 51 pic.twitter.com/VvkrMgn1WH

me after I save an alien but it keeps making jokes about destroying mankind #Area51memes #area51raid #Area51 pic.twitter.com/moPxY6x7RQ

The alien I got from area 51 waiting for me to get off twitter to tell me that he took a shit in the closet. pic.twitter.com/qlnpZ9K35s

Finally, people are making memes about eventually exiting Area 51, but—between the United States military and imaginably pissed off extraterrestrials—it’s uh, not looking good in most models.

me looking over area 51 after all my homies died in the raid pic.twitter.com/IVGopUdLMm

Folks, there’s a reason why most extraterrestrial movies don’t feature cute, Reese’s Pieces-loving aliens that seamlessly blend in with a closet full of a child’s stuffed toys. Stay safe out there in those Nevada streets.