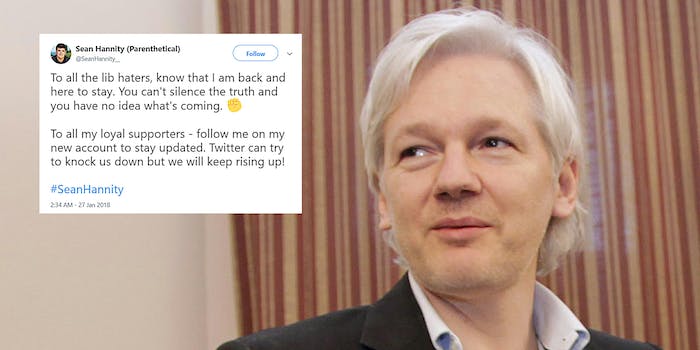 "You can send me messages on other channels."

It’s 2018, and Julian Assange is still bad at Twitter.

You might remember that the WikiLeaks founder was roasted several times last year for doing things like creating a Twitter poll about the “transparency” of the Trump administration and attacking memes that called him ‘cupboard boy.’ Assange was also part of the group that had early access to the 280-character feature on Twitter. Now Assange has been caught trying to direct message Fox News Host Sean Hannity about “news” he apparently had on Sen. Mark Warner (D-Va.), the top Democrat on the committee investigating Russia’s interference in the 2016 election.

But Assange wasn’t actually exchanging DMs with Hannity; he was contacting an unverified, fake account run by a woman in Texas.

Assange tweeted about the incident.

The most watched TV host in the U.S., @SeanHannity has his Twitter account (3.3 million followers) mysteriously disappear after tweeting "Submission Form 1649" https://t.co/jIw0Lq5K1m pic.twitter.com/Op3b2h24Zu

With the real Sean Hannity off Twitter, many fake accounts began popping up claiming to be run by Hannity, the Daily Beast reported, and Gilliam’s account was the most popular of these. (Currently, her account has nearly 24,000 followers.) Gilliam told the publication that she reached out to Assange first over DM, and he took the bait.

“I can’t believe this is happening. I mean… I can. It’s crazy. Nothing can be put past people,” Gilliam wrote. “I’m exhausted from the whole night. What about you, though? You doing ok?”

“You can send me messages on other channels,” Assange apparently told Gilliam.

“Have some news about Warner,” he continued.

Warner had been in the news recently for saying that new information his committee received “raises more questions” in the Russia investigation.

Assange wasn’t the only person who thought that Gilliam’s account was run by Sean Hannity—just look at the account’s thousands of Twitter followers for proof. She also mimicked the voice of Hannity in the first tweet:

Hannity’s real account was restored on Sunday, and Twitter said that it was “briefly compromised” over the weekend. His announcement of his return to the service was eerily similar to the tweet sent from the fake account (above).

It’s easy to see how someone could confuse the real Hannity with the fake Hannity, and the incident is yet another example of how fake information can quickly spread across social sites. But using Twitter DMs to tell Hannity that you have information for a story—before verifying that it’s actually the Fox News host? That’s just careless. Assange wants to be taken seriously, but his actions on Twitter keep proving that he doesn’t think before he acts. Or, in this case, slides into someone’s DMs.